WORLD US to leave 200 troops in Syria after pullout

US to leave 200 troops in Syria after pullout

WASHINGTON, Feb. 21 (Xinhua) -- The White House said Thursday that the United States would leave a small proportion of troops in Syria after the planned pullout. 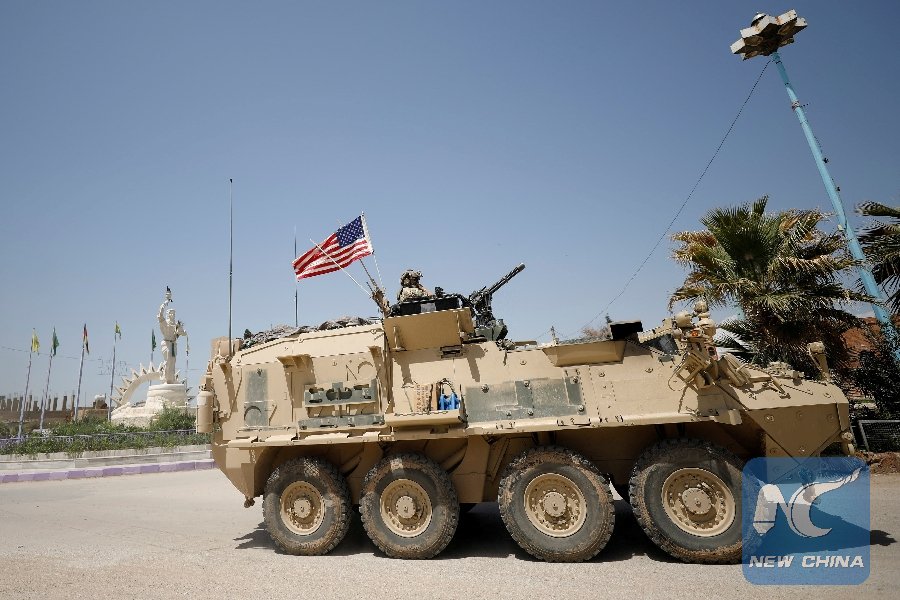 A US military vehicle travels in the town of Amuda, northern Syria April 29, 2017. (File photo: Xinhua)

"A small peacekeeping group of about 200 will remain in Syria for a period of time," White House Press Secretary Sarah Sanders said in a statement.

The 200 troops would be divided between At-Tanf, an area near the Iraq-Jordan border, and northeast Syria, CNN reported, citing a US official familiar with the planning process.

The White House's decision to leave 200 troops in Syria came several days after US European allies reportedly turned down a US request to fill the gap with their troops.

Allies have "unanimously" told the United States that they "won't stay if you pull out," the Washington Post reported, citing a senior administration official.

The commander of the US-backed Syrian Democratic Forces (SDF) reportedly called on Monday for about 1,000 to 1,500 international forces to remain in Syria to help fight the Islamic State (IS).

Currently, there are about 2,000 US troops deployed in Syria.

Declaring victory over the IS, President Donald Trump last December announced the withdrawal of US troops from Syria, leading to the resignation of then US Secretary of Defense James Mattis.

Trump tweeted on Saturday that "the Caliphate is ready to fall" and reaffirmed his decision to withdraw troops from Syria after a complete defeat of the IS.

General Joseph Votel, the commander of the US Central Command, told the media earlier this month that the United States would likely start to withdraw its troops from Syria in the coming weeks.

Also on Thursday, President Trump spoke over phone with his Turkish counterpart Recep Tayyip Erdogan on Syria. The two leaders agreed to continue coordinating the creation of a potential safe zone in Syria, the White House said in a statement.

The statement also noted that acting Pentagon chief Patrick Shanahan and Chairman of the Joint Chiefs of Staff Joseph Dunford would be hosting talks with their Turkish counterparts in Washington soon this week.

The United States and Turkey have been recently sparring over the fortunes of Kurdish militia in northern Syria, which is an ally of Washington in the campaign against the IS, but viewed as a "terrorist group" by Ankara.

Washington last month proposed setting up a security zone in northeastern Syria, a move welcomed by Ankara. Erdogan and his senior officials have repeatedly insisted that the security zone should be exclusively under Turkish control.