WORLD US to offer N.Korea security

US to offer N.Korea security

The US is preparing to provide security assurances to North Korea, US Secretary of State Mike Pompeo said on Monday as the world anticipates Tuesday's summit between North Korean leader Kim Jong-un and US President Donald Trump in Singapore. 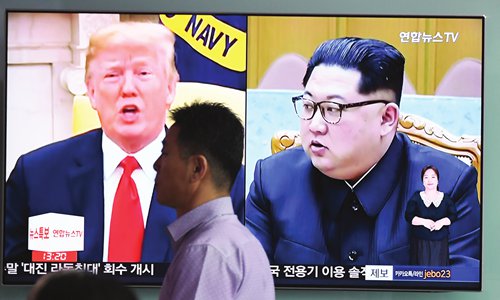 A man walks past a television showing US President Donald Trump (left) and North Korean leader Kim Jong-un, at a train station in Seoul on Monday. Kim and Trump will meet on Tuesday for an unprecedented summit. (Photo: AFP)

Complete, verifiable, irreversible denuclearization (CVID) is the only outcome that the US will accept at the Tuesday summit with Kim, Pompeo told media in Singapore on Monday.

He also said that the US is preparing to provide North Korea with security assurances "fundamentally different from before" to achieve denuclearization.

North Korea has confirmed its willingness to denuclearize, and "we are eager to see if those words prove sincere," Pompeo said. But he also stressed that US sanctions on North Korea will remain until that has been achieved.

Cui Zhiying, director of Tongji University's Korean Peninsula Research Center, told the Global Times on Monday that the US' promise of security assurances will meet North Korea's demands, which could help lead to an agreement.

Cui said that Pompeo's remarks ahead of the summit cannot entirely represent the US' final decision. "Kim and Trump may still talk about the sanctions on Tuesday. It is possible that the US may relax sanctions if North Korea can provide concrete action on denuclearization," Cui said.

Kim Jin-ho, a professor of international relations at South Korea's Dankook University, told the Global Times on Monday, "The US will not abandon its position on CVID."

But it might be a more reasonable and pragmatic position to accommodate a phased approach to denuclearization, rather than realizing CVID "all at once," Kim Jin-ho said.

"Even if the two leaders reach an agreement, challenges still remain. If the US Congress cannot agree on lifting sanctions or ending the state of war after Trump completes his term, the agreement might be abandoned by the next US administration," Kim Jin-ho said.

"We've got a very interesting meeting tomorrow, and I think it's going to work out very nicely," Trump told Lee after sitting down for lunch at the Istana Palace.

"We appreciate your hospitality and professionalism and your friendship. Thank you very much," Trump told Lee. All eyes on summit

The world is paying attention to Tuesday's Kim-Trump summit, with many countries expressing support.

Chinese Foreign Ministry spokesperson Geng Shuang told a daily briefing on Monday that "the international community is now highly focused on the meeting between the US and North Korean leaders. China sincerely hopes that the meeting leads to positive results and contributes to the denuclearization of the Korean Peninsula and a political settlement."

In response to questions on Kim's arrival in Singapore on an Air China flight on Sunday, Geng said that "under the request from North Korea, a Chinese plane provided the related services to the North Korean delegation on their way to Singapore."

Photos provided by the Singaporean government showed that Kim arrived on an Air China plane.

Fu Ying, China's former vice foreign minister and once a member of China's delegation in the Six-Party Talks on Korean Peninsula issues, wrote an article for Washington Post on Sunday, saying that "China's position has been consistent… The fact that Pyongyang and the United States are embarking on a journey of peaceful negotiations is in the right direction - a direction China has all along called for and has played a vital role in making possible."

"Indeed, success of the summit between Trump and North Korean leader Kim Jong Un is not impossible. Both sides have made previously unimaginable concessions to make this happen. The summit may even lead to a new agreement and usher in an important stabilizing process," read the article.

South Korean President Moon Jae-inalso hopes for the success of the summit, telling Trump over the phone on Monday that all South Koreans will pray for its success, Yonhap News Agency reported on Monday.