WORLD US to pay heavily for reckless sanctions aimed at China

US to pay heavily for reckless sanctions aimed at China 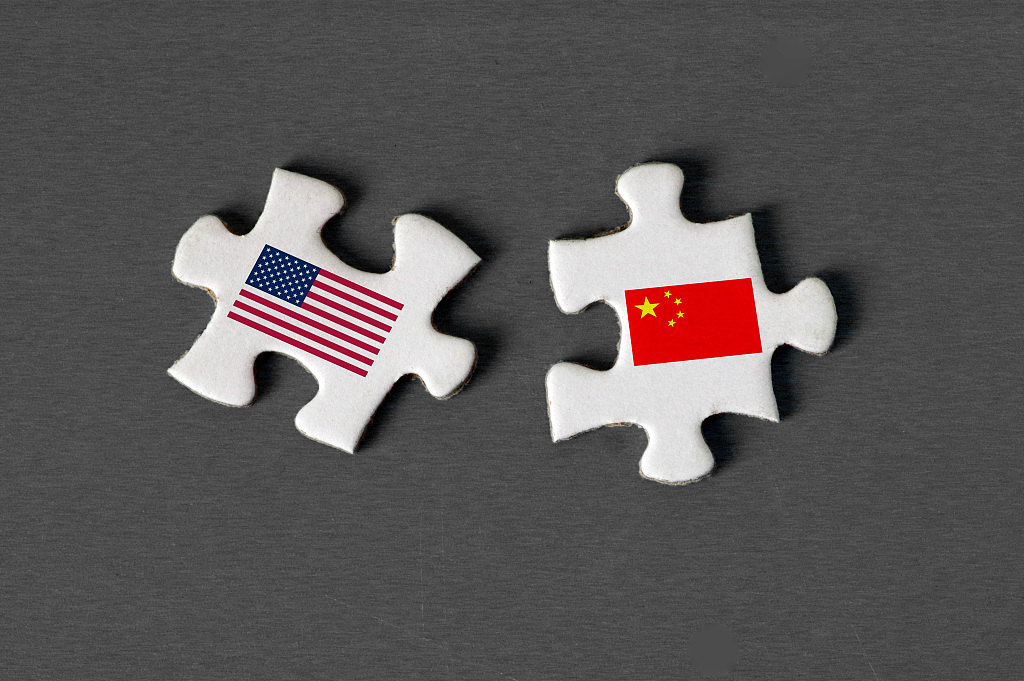 The announcement, as part of new broadsides aimed at China, builds on Trump's bullying tactics that attempt to pin the US government's failed response to the COVID-19 pandemic on China.

"We will take actions to revoke Hong Kong's preferential treatment as a separate customs and travel territory from the rest of China," Trump said during a press conference on China on Friday, May 29.

The media briefing started one hour later than the scheduled time as Trump appeared to be busy appeasing domestic anger over a former Minneapolis police officer who was charged with manslaughter in a black man George Floyd's death.

The announcement will affect a range of agreements the US has with Hong Kong, including its extradition treaty, Trump said, adding the US would also take necessary steps to "sanction PRC in Hong Kong officials" directly or indirectly involved in eroding Hong Kong autonomy.

"We will be today terminating our relationship with the World Health Organization (WHO)," Trump said, citing what he referred to as China's COVID-19 "cover-up."

US Secretary of State Mike Pompeo reported to Congress on May 27 that Hong Kong no longer deserves its special status under US law, a move that was believed to pave the way for Washington sanctions.

"Investment firms should not be subjecting their clients to the hidden under risks associated with financing Chinese companies that do not play by the same rules," Trump stated.

Stock markets across the Pacific were impervious to Trump's latest threats. US stocks ended higher following Trump's address, with China A50 futures also swinging back swiftly to positive territory. 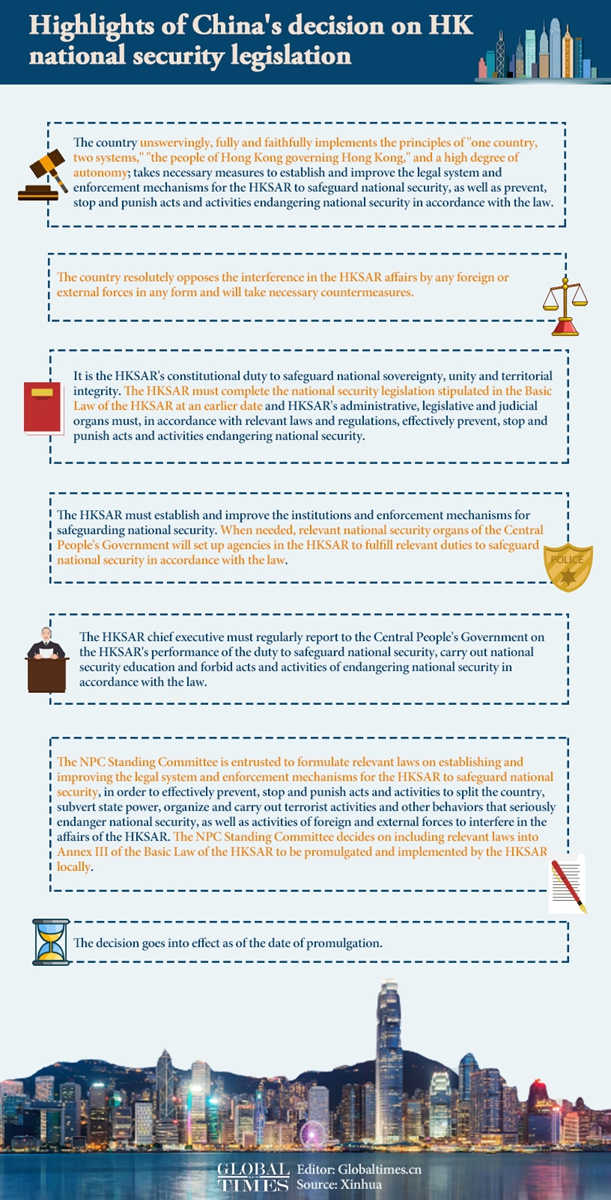 "We have been preparing for all the different scenarios," said Hong Kong Finance Secretary Paul Chan Mo-po in an interview with the Global Times hours before Trump's China press conference.

Chan noted that revoking the city's special treatment status would have little impact as its services sector dominates the local economy. The added tariffs would only affect locally produced products exported to the US, which account for less than 2 percent of Hong Kong's overall manufacturing and less than 0.1 percent of its overall exports.

"Our special treatment status in trade is entrusted by the Basic Law. The law permits Hong Kong to join the WTO as Hong Kong, China, showing that the SAR's independent tariff zone is granted by the mainland, not by any foreign country," he said.

"We have confidence and experience in dealing with challenges as the financial market in Hong Kong has gone through a lot. With the support of the whole country, we have nothing to be afraid of," he went on to say.

The US, rather than China, its "imaginary enemy", will pay a hefty price for its reckless venture by imposing sanctions on Hong Kong, regional affairs observers said, noting that they wouldn't wonder at decreasing US clout in Hong Kong as the US proceeds with bullying tactics which would only end up putting its interests at risk.

The US could play many tricks that would mount to violent attacks in political and public opinion spheres. But the US doesn't have a Hong Kong - and Chinese mainland-aimed sanction tool available to deal the country a heavy blow while paying only a paltry price, said Lau Siu-kai, a vice-president of the Chinese Association of Hong Kong and Macao Studies.

Real-world actions the US could take are pricey and yield little reward, which would subject itself to substantial looses, Lau said.

Hong Kong's economy and trade would take a hit from the US move to unilaterally revoke Hong Kong's status as a separate customs territory, said Liang Haiming, chairman of Guangzhou-based China Silk Road Valley Research Institute, noting that it would cause US exports to suffer the greatest blow.

"In the past decade, US trade surplus with Hong Kong has been the biggest among its trading partners, with merchandise surplus totaling $297 billion from 2009 to 2018. In 2019, that surplus had dropped from $31.4 billion in the preceding year to $26.4 billion as a result of US-China trade tensions," a spokesman for the HKSAR government said on Thursday.

"Should any sanctions be contemplated in other areas like services and investment, the interests of the 1,300 US corporations based in Hong Kong might further be affected," the spokesman added.

Even if the US revokes Hong Kong's special customs status due to the national security law, local manufacturers wouldn't be affected as there are not many locally made products, local site news.now.com reported on Thursday, citing Dennis Ng Wang-pun, president of the Chinese Manufacturers' Association of Hong Kong.

Take US-destined jewelry exports from the mainland. Punitive tariffs have already hiked by 15 percent amid the China-US trade tensions. Consequently, exporters would opt to set up factories in Thailand to reduce tariff payouts, and some smaller businesses that are financially weak would simply abandon the US market, according to Ng.

According to Lau, scrapping Hong Kong's special trade status would mean the US would see its clout decline.

Hong Kong is a global free port, suggesting the US is incapable of single-handedly deciding on the city's future. As long as the Asia-Pacific region retains an ascending part of the global economic development and China remains a vital contributor to the world, the impact of any US sanctions imposed on Hong Kong would be short-term, Lau speculated.

Global talent and capital would continue to compete for a foothold in the city, while the US' retreat would signify that its market presence would be replaced by capital, businesses, and talent from other countries and regions, stressing that a future comeback to Hong Kong would be extremely difficult and not worth the expense, Lau said.

Arguing against the mentality that motivates sanctions to be imposed, Liang commented that western firms including US businesses would be forced to give up returns expected from their investment in the Hong Kong market, seriously damaging commercial interests.

Furthermore, western financial institutions could miss opportunities to share China's economic growth dividends, Liang told the Global Times, noting that US firms, along with Wall Street commercial and financial tycoons are less likely to place their commercial interests at risk for the sake of the US government and Trump's re-election drive.

The biggest risk driving foreigners and foreign firms away from Hong Kong isn't from the new national security law, but from violence and social unrest, Angelo Giuliano, a Swiss business representative who has been working in M&A-related business in Hong Kong, told the Global Times.

The new legislation won't have an impact on Hong Kong's role as an international financial hub, Giuliano said.

According to Liang, the enforcement of the new law would help eliminate political misgivings in Hong Kong, restore social order and stability while convincing locals and the outside world that the city's legal foundation had not been undermined and the "one country, two systems" principle remained intact.

Foreign investors will be more confident about investing in Hong Kong and will be attracted to the city, Liang concluded.