WORLD US to reconsider asylum for separated immigrant families

US to reconsider asylum for separated immigrant families 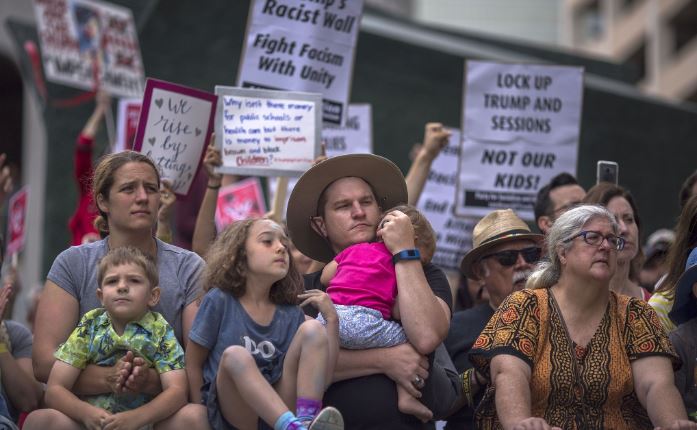 Protesters demand that children be reunited with their immigrant parents during a demonstration in San Diego, California on June 23, 2018. (Photo: VCG)

US President Donald Trump's administration has agreed to reconsider the asylum claims of some 1,000 immigrant parents and children who were separated at the US border as part of a deal to settle lawsuits over his “zero-tolerance” immigration policy.

The settlement, detailed in court documents late on Wednesday, represented a victory for rights groups that challenged Trump's contentious family separation policy that was aimed at deterring illegal immigration.

If approved by US District Judge Dana Sabraw in San Diego, immigrant parents and their children will get a second chance to apply for asylum even if US authorities previously rejected their claims that they faced a “credible fear of persecution or torture” if sent back to their home countries.

More than 1,000 people will be eligible to apply again for asylum under the settlement, according to Muslim Advocates, one of the rights groups that sued the administration.

The family separations and the detention of thousands of children, mostly from Guatemala, Honduras and El Salvador, prompted widespread condemnation of Trump's policy. About 2,500 children and parents were separated before Trump abandoned the policy in June. Days later, a federal judge ordered the families reunited, a process that is still incomplete.

The agreement also leaves open the possibility that some of the hundreds of parents already deported without their children could return to the United States, according to the American Civil Liberties Union, which brought one of the lawsuits. Their claims would be considered on a case-by-case basis.

Immigration lawyers have said that some of these parents may have a case for returning to pursue asylum because they were coerced into dropping their asylum bid, believing it was the only way to get their children back.

The settlement stems from three lawsuits against the administration brought by the American Civil Liberties Union, Muslim Advocates and the Hogan Lovells law firm, among others.

One lawsuit alleged that parents were suffering extreme trauma from the forced separation of their children and therefore failed a “credible fear” interview, which was their only opportunity to avoid expedited removal from the United States.

Under the settlement, these parents will now be able to submit additional evidence and testimony to establish credible fear of returning to their home country.

Sirine Shebaya, an attorney for Muslim Advocates, called the agreement a significant victory for these parents. “They will finally have a real chance to be heard and to secure safety and stability for themselves and their families,” Shebaya said.

For asylum seekers who pass a credible fear test, their case then goes to an immigration judge. Many ultimately may not be granted asylum, but their cases may drag on for years. During that time, the applicant is allowed to live and work in the United States.

Trump, known for his hard line toward immigration, has taken steps to reduce illegal and legal immigration. His administration this month said it planned to withdraw from a court agreement that for 20 years has governed how the US government detains immigrant minors.