WORLD US to step up pressure on Russia with more sanctions

US to step up pressure on Russia with more sanctions

WASHINGTON, Aug. 21 (Xinhua) -- As US threat of sanctions on Russia will take into effect around Aug. 22, US Under Secretary of Treasury Sigal Mandelker said Tuesday that Washington will impose "much more economic pain" to Russia if it does not change its global behaviors significantly. 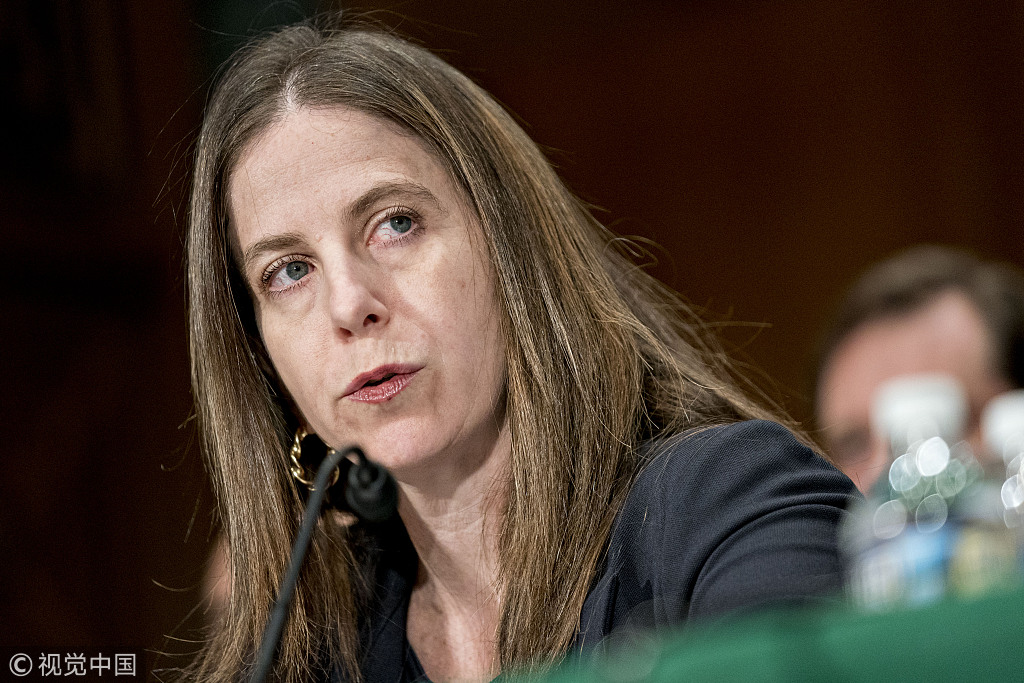 Sigal Mandelker, undersecretary of terrorism and financial crimes at the US Treasury, speaks during a Senate Banking Committee hearing in Washington, D.C., US, on Tuesday, Aug. 21, 2018. (Photos: VCG)

Speaking before the US Senate Committee on Banking, Housing, and Urban Affairs, Mandelker said that "though Russia's malign activities continue, we believe its adventurism undoubtedly has been checked by the knowledge that we can bring much more economic pain to bear using our powerful range of authorities - and that we will not hesitate to do so if its conduct does not demonstrably and significantly change."

"The significance of our actions and other financial measures must ultimately be measured in terms of their strategic impacts," she added.

In a separate hearing, Assistant Treasury Secretary Marshall Billingslea told the Senate Committee on Foreign Relations that "Treasury has made countering Russian aggression a top priority" and "will continue to do its part to impose costs in response to Russian malign activity, leveraging all of the tools and authorities that we have."

Since January 2017, the Trump administration has sanctioned 217 Russian-related individuals and entities for a broad range of conduct.

Earlier on Tuesday, the Treasury announced to sanction several Russia-related individuals and entities over their involvement in actions against the US sanctions.

The US State Department said earlier this month that the country will impose new sanctions on Russia in two phases, and the first batch will take effect around Aug. 22.

However, Billingslea said in the hearing that considering the size of the Russian economy and its deep integration into the global economy and financial system, US "sanctions are not and cannot be the only tool on which we rely."

He listed the engagement with foreign governments and private sector at home and abroad, and cooperation with international organizations and domestic and foreign media.

A. Wess Mitchell, assistant secretary of state, also told the Senate Foreign Relations Committee that "Russia has evolved beyond being simply an external or military one; it includes influence operations orchestrated by the Kremlin in the very heart of the Western world."

He added that US Russia policy is based on the recognition that "to be effective, US diplomacy must be backed by military power that is second to none and fully integrated with our allies and all of our instruments of power."

Mitchell noted that "even as we have imposed unprecedented penalties for Russian aggression, we have been clear that the door to dialogue is open" if Russia makes changes as Washington wants.

Moscow has repeatedly said that it reserves the right to take additional countermeasures against US diplomatic properties in Russia if Washington continues hostility.

US President Donald Trump indicated on Monday that he would consider lifting US sanctions on Russia if Moscow took some actions in such areas as Syria or Ukraine.

Trump has been widely attacked after his Helsinki meeting with Putin, due to his reconciliatory remarks that many saw as a sign of siding with Moscow against the US intelligence community's conclusion that Russia meddled in the 2016 US elections.

Kremlin spokesman Dmitry Peskov also said Monday that the upcoming US sanctions are "unfriendly" and "illegal," and will hurt broader international trade.