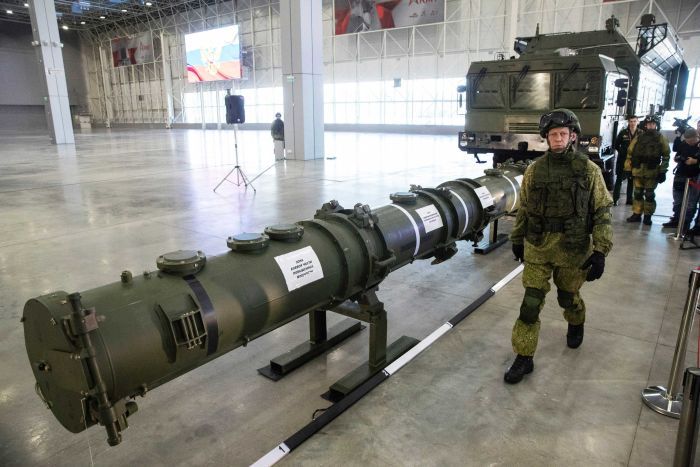 MOSCOW, Feb. 4 (Xinhua) -- Russia will give an adequate response to the US withdrawal from the Intermediate-Range Nuclear Forces (INF) Treaty but will not shelve proposals aimed at stopping the arms race, Russian Foreign Minister Sergei Lavrov said Monday.

Lavrov made the remarks while speaking to students of the Kyrgyz-Russian Slavic University in Kyrgyzstan's capital of Bishkek, according to a transcript by the foreign ministry.

"We will certainly respond with military-technical means to the threats that are created as a result of the US withdrawal from the INF Treaty and as a result of its plans to build low-power nuclear weapons," Lavrov said.

He said Russia is not striving for a Cold War-style arms race, adding that the country will work within the budget of the Russian defense ministry.

He said some US experts have already warned that the Treaty on the Reduction of Strategic Offensive Arms of 2010 (New START), which will expire in 2021, could go next.

Lavrov said there is no shortage of initiatives to handle the problems in today's world concerning armaments, production of new weapons and strategic stability.

Russia has repeatedly advanced such initiatives in recent years and proposed a phased approach to start new talks on arms limitation, starting with a joint Russia-US declaration on the inadmissibility of a nuclear war, Lavrov said.

But all Moscow's proposals were either rejected or left without a response, he noted.

Lavrov said Russia will talk only on an equal footing and on the basis of taking into account each other's legitimate, and not invented, interests.