WORLD US to take 'extraordinary' measures in face of migrant surge

US to take 'extraordinary' measures in face of migrant surge 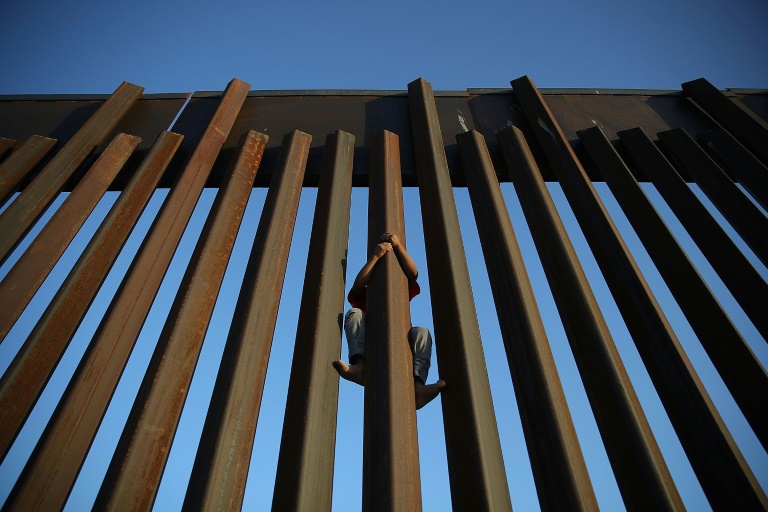 A child climbs up the Mexican side of the US-Mexico border fence at Sunland Park, New Mexico, in June 2018.(Photo: AFP)

The United States will take "extraordinary" protective measures to deal with a surge of immigrant children in custody, Homeland Security Secretary Kirstjen Nielsen has said after a second Guatemalan child died in custody.

Nielsen plans to travel later this week to the Mexico border region to witness medical screenings and conditions at Border Patrol stations, she said in a statement Wednesday, as Congress and President Donald Trump remain deadlocked over his demands for billions of dollars to fund a wall along the border.

"In response to the unprecedented surge of children into our custody, I have directed a series of extraordinary protective measures," she said in a statement after the "deeply concerning and heartbreaking" death of the child.

Nielsen has asked experts from the Centers for Disease Control and Prevention to investigate "the uptick in sick children crossing our borders" and to identify what further steps border hospitals should take in preparation, her statement said.

Nielsen added that she has asked the US Coast Guard medical corps to assess and "make appropriate recommendations" about Border Patrol medical programs, and has sought additional medical professionals from the Department of Defense.

"We need help from Congress. We need to budget for medical care and mental health care for children in our facilities," he told CBS News.

Eight-year-old Felipe Gomez, who collapsed after running a fever, had traveled with his father Agustin Gomez from the indigenous Chuj Maya community of Nenton, in western Guatemala's Huehuetenango department, near the Mexican border.

He was among almost 25,000 migrant children in US custody, according to McAleenan -- the greatest number ever recorded.

"That's an enormous flow. That's very different from what we've seen before," he said, adding that the onset of the flu season was putting further pressure on health care services.

In the last two months, Border Patrol has apprehended 139,817 people on the southwest border, compared with 74,946 during the same period a year earlier, Nielsen said.

More than 68,500 were "family units" while almost 14,000 others were unaccompanied children, she said, and the system has been pushed to "breaking point."

Augusto Mendoza, a Guatemalan migrant in El Paso with his one-year-old son, told AFP he would "never" consider making the journey again.

"It's been very, very hard. I would never think about doing it again, I regret it for my son," said Mendoza, who was separated from his wife at the border and released from detention on Christmas Day.

DHS officials said all children in border patrol custody would be given a thorough medical screening, reaffirming McAleenan's commitment to "secondary medical checks" with a focus on those under 10.

And Guatemala has called for an investigation into the boy's death, which came just three weeks after a seven-year-old girl from the country died in similar circumstances.

Staff diagnosed him with a cold but later discovered a fever. He was discharged at midday, with prescriptions for ibuprofen and the antibiotic amoxicillin.

The boy was later sent back to the hospital suffering from nausea and vomiting. He died shortly before midnight on December 24.

CBP said it had not established the cause of death but would "ensure an independent and thorough review of the circumstances."

Nielsen said that in the last fiscal year there were six migrant deaths in custody, but no child had died in Border Patrol custody for more than a decade.

"It is now clear that migrants, particularly children, are increasingly facing medical challenges and harboring illness caused by their long and dangerous journey," she said.

"The Trump administration must be held accountable for this child's death and all the lives they have put in danger with their intentional chaos and disregard for human life," Senator Martin Heinrich of New Mexico tweeted.

The boy's death came on the same day that Jakelin Caal, a Guatemalan girl who died in US custody, was buried.

Her body arrived on Sunday in San Antonio Secortez, the remote village where her family -- members of the indigenous Q'eqchi' Maya people -- live without electricity and other basic services.