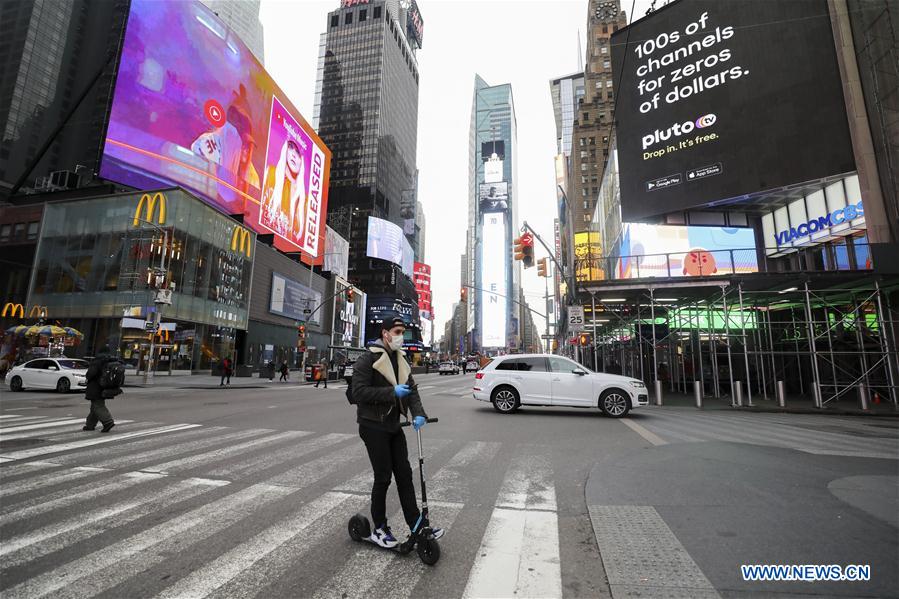 A man wearing a facial mask moves with a scooter on Times Square in New York City, the United States, March 19, 2020. (Photo: Xinhua)

WASHINGTON, March 24 (Xinhua) -- The Trump administration will use the Defense Production Act (DPA) on Tuesday for the first time, to procure some 60,000 test kits to aid against the novel coronavirus pandemic, according to a senior emergency management official.

Peter Gaynor, administrator of the Federal Emergency Management Agency, told CNN that the administration had decided to use the law, which President Donald Trump recently said he would invoke, because "there's some test kits we need to get our hands on."

Gaynor said the federal government is also going to insert "DPA language" into "mass contracts that we have for the 500 million masks."

Trump signed an executive order on March 18 to invoke the DPA but has since been under pressure from state governors to actually take action. He tweeted Tuesday morning that the law "is in full force, but haven't had to use it."

Passed by Congress in 1950 as a response to the Korean War, the DPA gives the president the authority to ask private companies to ramp up production of national defense-related items.

By invoking the law, Trump now has the authority to direct companies to boost production of medical supplies such as respirators, gowns and ventilators, as well as control the distribution of those items.

The president, however, was reportedly faced with pushback from business leaders who opposed him executing the wartime power, citing concerns over loss of profit as a consequence.

He resisted calls to use the law at a White House news briefing Sunday, saying "the concept of nationalizing our businesses is not a good concept." The DPA, however, does not authorize the government to take ownership of companies or industries.

The country is scrambling to fill the gap in the supply of critical medical equipment such as masks.

Gaynor said during CNN's "State of the Union" program Sunday that he could not give the number of medical masks the federal government could provide for hospitals. "When it comes to supplies, we have been shipping from the national stockpile for weeks."

Health and Human Services (HHS) Secretary Alex Azar testified before senators in late February that the country has "30 million N95 respirators in the strategic national stockpile," and that it needs 300 million for healthcare workers.

In another development, Trump signed an executive order Monday using the authority he is given under the DPA to prohibit price gouging and hoarding of medical supplies deemed vital amid the spread of COVID-19.

The president told reporters at the White House on Monday that the HHS will designate certain items as "scarce," making it a crime to excessively stockpile items that are so designated.