WORLD US touted COVID-19 cure, Remdesivir, fails WHO trials as US confirmed cases surge past 8m

US touted COVID-19 cure, Remdesivir, fails WHO trials as US confirmed cases surge past 8m 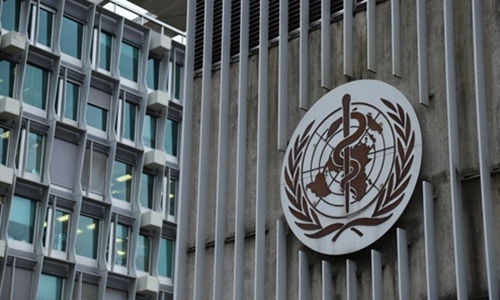 Photo taken on Jan. 30, 2020 shows the headquarters of the World Health Organization (WHO) in Geneva, Switzerland. (Xinhua/Chen Junxia)

A World Health Organization study confirms  Remdesivir, Trump administration’s much-touted COVID-19 treatment, is not a miracle cure according to its trials involving more than 10,000 patients. Experts worry misleading and ineffective measures in the US are helping the spread of the pandemic, which has killed 218,000 people and infected more than 8 million in the US.

Many experts have criticized the Trump administration for its lack of respect for scientific, evidence-based preventive measures that appear to be leading the US toward a new peak in the number of people diagnosed with the virus.

While earlier studies said Remdesivir can reduce the average recovery time of COVID-19 patients, findings of the new study on Thursday, sponsored by WHO, were  a blow to hopes that the drug can help people stricken by the virus. WHO’s trial results confirmed that there is no substantial effect on a patient’s chance of survival, which is consistent with previous findings by Chinese experts.

The trial found that “all four treatments evaluated (Remdesivir, hydroxychloroquine, lopinavir/ritonavir, and interferon) had little or no effect on overall mortality, initiation of ventilation, and duration of hospital stay in hospitalized patients," reads a WHO statement, published on its website.

WHO’s trial involving 11,266 hospitalized patients examined the effects of Remdesivir and other three potential cures, including hydroxychloroquine which received high praise from Trump.

A medical report published by Chinese research team in the medical journal The Lancet on April 29 showed that Remdesivir was not associated with statistically significant clinical benefit for adult patients admitted to hospital for severe COVID-19. In other words, this potential antiviral drug has not been proven effective for treatment of patients hospitalized with the novel coronavirus.

A group of Chinese medical experts conducted the randomized, double-blind, placebo-controlled trial at 10 hospitals in Central China’s Hubei Province. The experts found that significantly reduced SARS-CoV-1 lung titres but did not decrease disease severity or mortality of 237 patients in experiment.

Another medical research result published by Chinese research team on bioRvix, an open access preprint repository for the biological sciences, found that a high dosage of Remdesivir may cause a significant decrease in the total sperm count and motile sperm rate of male mice and increasing the abnormal sperm rate.

“Remdesivir was used in early treatment of the coronavirus in Wuhan and proven to be ineffective in severe cases. But it could be tried as part of an early-stage therapy for patients with mild symptoms, given that the drug is relatively safe in clinical trials,” Yang Zhanqiu, deputy director of the pathogen biology department at Wuhan University, told the Global Times.

Remdesivir was initially produced for Ebola virus treatment, and demonstrated as an effective cure for SARS and MERS coronavirus in laboratory tests. The US Food and Drug Administration (FDA) has granted emergency use authorization for Remdesivir in May, but in an FDA fact sheet for patients and their families and caregivers, the agency noted that Remdesivir has not undergone the same type of review as an FDA-approved or cleared product.

The EU has also signed an agreement with Remdesivir’s producer Gilead for 500,000 treatment courses of the drug in EU countries. Gilead has priced Remdesivir at $2,340 for each five-day course, drawing criticism from medical experts concerned the pricy drug was not proven to effectively save lives.

“The US seems less inclined to follow the advice of professional health teams, and more inclined to use Trump’s profile to advertise certain drugs and present misleading treatment options,” Peng Zhiyong, director of the intensive care unit of the Zhongnan Hospital of Wuhan University in Wuhan, told the Global Times on Saturday.

Trump was treated with Remdesivir after he tested positive for coronavirus.

“The US is in the midst of a third wave of outbreaks, characterized by high infection rates and low mortality rates, and the symbolic figure of 8 million infections is entirely due to the government's unscientific coping with the epidemic,” said Peng. “If the US government makes no change, the number of infections are bound to increase until effective drugs and vaccines are available.”

“Trump has failed the United States. Pushing ineffective drugs during a global pandemic is partly why,” said a Twitter user named Eric.