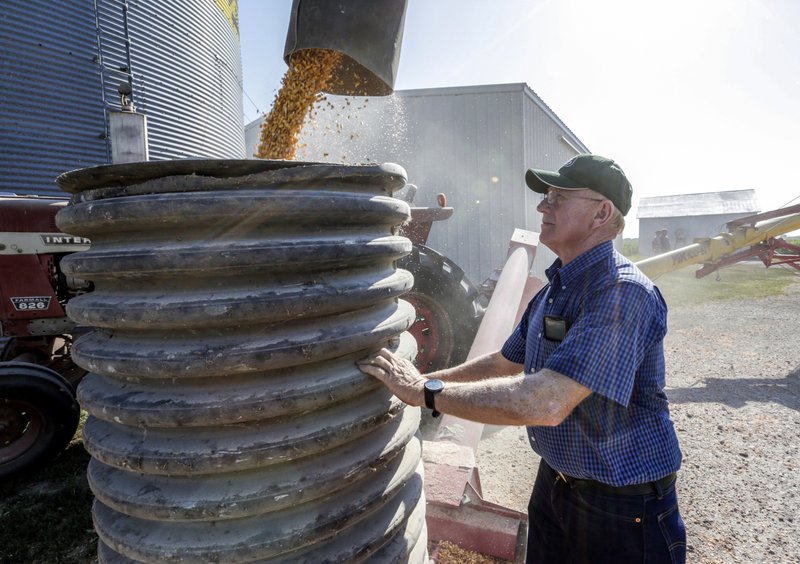 Even before the specter of a trade war with China and other countries threatened to cost them billions of dollars, American farmers were feeling the squeeze from fluctuating crop prices and other factors that have halved their overall income in recent years.

The threat of counter-tariffs on US farm goods and the impact of President Donald Trump’s other policies on immigration and biofuels, though, have some farmers more worried than ever about their ability to continue eking out an existence in agriculture.

“No matter where you look in ag right now, you see storm clouds on the horizon and some of those are a lot closer overhead than we’d care for,” said Chad Hart, an agricultural economist with Iowa State University.

Trump’s tariff threats earlier this year against China, Mexico, Canada and European Union elicited quick retaliatory measures that depressed the prices of certain US agricultural products, including corn, soybeans, pork. When $34 billion worth of tariffs against China took effect July 6 and China responded with tariffs of its own, US farmers were already feeling the squeeze from lower crop prices, higher land prices and other factors.

The Department of Agriculture predicted before the threat of tariffs and counter-tariffs that US farm income would drop this year to $60 billion, or half the $120 billion of five years ago. That projection is likely high, given what’s transpired since.

Don Bloss, who grows corn, soybeans, sorghum and wheat on his farm in the southeastern Nebraska community of Pawnee City, said he’s already seen a few neighbors quit farming as they struggled to make a profit even before the tariff battle began this year.

“They aren’t making money. One has said the banker is giving up on them,” said Bloss.

John Weber, who raises pigs and grows corn and soybeans with his son about 100 miles northeast of Des Moines, near Dysart, said many farmers’ budgets were already tight going into this growing season and the impact of tariffs has made it worse.

“Some were given the go-ahead for another year, but boy, you start looking at these lower prices and the extra costs that are out there now it gets tough. It just doesn’t work,” he said.

Per-bushel soybean prices have fallen 19 percent since early May to a 10-year low and corn is down more than 15 percent. At current prices, most farmers lose money on corn, soybeans and pigs.

US pork producers stand to lose more than $2 billion per year because of plunging hog futures prices, the result of the Chinese retaliatory tariffs, according to Iowa State University economists’ projections.

“That means less income for pork producers and, ultimately, some of them going out of business,” said Jim Heimerl, a pig farmer from Johnstown, Ohio, and president of the National Pork Producers Council, an industry trade group.

Agriculture Secretary Sonny Perdue has promised that Trump will restore farmer profitability but he hasn’t specified how and some economists are skeptical that the administration can come up with the billions of dollars necessary to cover losses.

“If this continues and the USDA does not discover a way to helicopter in and drop buckets of cash into the corn belt this fall, then I would not be surprised if there are tractor parades going to DC at some point in the next year,” said Scott Irwin, University of Illinois agricultural economist.

There’s no sign of a quick resolution to the trade dispute. The US and China have threatened to impose 25 percent tariffs next week on $16 billion of each other’s goods. And on Tuesday, Trump announced plans to impose 10 percent tariffs on an additional $200 billion in Chinese imports by the end of August. China said it would retaliate, leaving even more US farm products at risk.

Meanwhile, Trump’s hardline immigration policies have been making it even harder to recruit workers for pork producers, who have historically relied on immigrants for a third of their workforce. The industry had been planning a rapid expansion due to growing export demand from China and Mexico, but the trade dispute and raids spring immigration raids on a Tennessee meatpacking plant and an Iowa concrete plant have worried pork producers.

“Skilled and unskilled foreign workers have been crucial to maintaining and growing the workforce and revitalizing rural communities across the United States. We need more of them, not less,” Heimerl said.

The Trump administration’s willingness to issue waivers exempting petroleum refineries from having to blend ethanol into their fuels has led to an estimated 250 million bushels of corn going unused, which contributed to lower corn prices.

“There’s potential here for this to turn into the worst farm financial crisis since the 1980s,” Irwin said.