WORLD US troops clash with pro-government group in northeast Syria

US troops clash with pro-government group in northeast Syria 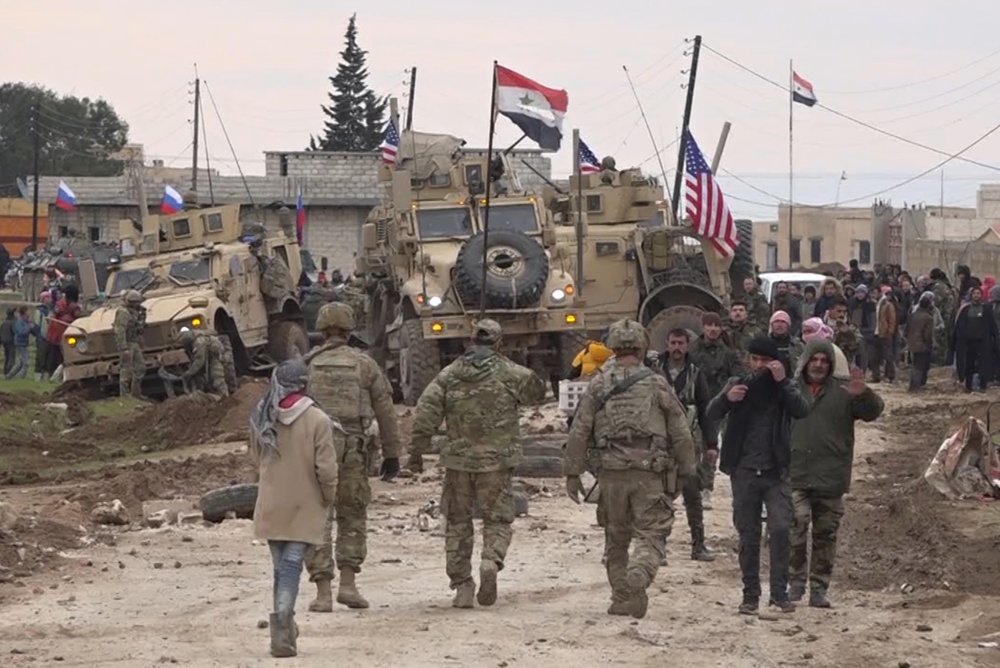 In this frame grab from video, Russian, Syrian and others gather next to an American military convoy stuck in the village of Khirbet Ammu, east of Qamishli city, Syria, Wednesday, Feb. 12, 2020. (Photo: AP)

A Syrian was killed and another was wounded when government supporters attacked American troops and tried to block their way as their convoy drove through an army checkpoint in northeastern Syria, prompting a rare clash, state media and activists reported.

The US military said its force came under fire, and that troops responded in self-defense. It said an investigation of the incident was underway.

Syrian state-run media said the man killed was a civilian and that he was among residents of a village east of the town of Qamishli who had gathered at the checkpoint and pelted the US convoy with stones.

A video posted on state news agency SANA’s website showed angry men firing small arms at a convoy of several armored US vehicles flying the US flag. Some residents pelted the convoy with stones, while another dumped a bucket full of dirt on the back of one vehicle.

In one of the worst incidents of violence against US troops deployed in northeastern Syria, a small fire appears to ignite on an armored vehicle, apparently from fire bombs lobbed at the convoy. US soldiers were seen standing in the middle of the melee, trying to disperse the crowd.

Other videos showed another vehicle stuck in the dirt, apparently having veered into a ditch, while another had a flat tire. In one video, a resident walked up to US soldiers at one of the vehicles, holding a US flag, screaming: “What do you want from our country? What is your business here?” A soldier tells the shouting man to “back off.”

At that point, American troops fired live ammunition and smoke bombs at the residents, the reports said.

A US military spokesman said coalition forces conducting a patrol near Qamishli encountered a checkpoint occupied by pro-Syrian government forces who ignored a series of warnings by coalition troops to de-escalate the situation. The patrol came under small-arms fire from unknown individuals, coalition spokesman Myles Caggins said, adding that coalition troops returned fire in self-defense.

“The situation was de-escalated and is under investigation,” he said in a statement. Air Force Lt. Col. Carla Gleason, traveling with the US defense secretary in Brussels, said no Americans were killed in the incident.

Asked about the incident, US Secretary of Defense Mark Esper said in Brussels he was told there was an “altercation,” without providing details.

“As far as I know today’s incident did not involve the Russians,” he said.

In other violence in the country’s northwest, Syrian President Bashar Assad’s forces continued their advance in Idlib and Aleppo provinces near the border with Turkey. They took full control of a strategic highway that runs through the rebel-held territory and links the capital to northern Syria. The M5 highway had been under opposition control for most of the war.

“Syria’s most important transport artery — the M5 highway linking the blocked northern capital of Aleppo with Hama, Homs and Damascus in the south — has been freed from terrorists,” the statement said.

With support from Russia, Syrian troops have been on the offensive for weeks in Idlib and parts of nearby Aleppo provinces, unleashing a humanitarian crisis with 700,000 people fleeing their homes and surging north toward the Turkish border.

The UN human rights office in Geneva recorded incidents between Feb. 1-10 in which at least 85 civilians were killed, including 20 women and 27 children with most casualties in the so-called “de-escalation area” in Idlib, UN spokesman Stephane Dujarric said Wednesday.

The Syrian war, now in its ninth year, has pulled in international players including the US, Russia and Turkey. Russia has supported Assad’s government, while Turkey is the rebels’ main backer.

The clash marked a rare confrontation involving US and Syrian troops in the crowded region where Russian forces are also deployed and was certain to escalate tensions.

At one point during the incident, US, Russian and Syrian flags could be seen next to each other, reflecting the complicated terrain in northeastern Syria. Some reports said a Russian convoy arrived on the scene to defuse the tension.

The Syrian Observatory for Human Rights said residents and armed pro-government militiamen in Khirbet Ammu blocked the path of a US convoy. The militia fired in the air, prompting the American troops to fire smoke bombs. Tension escalated and US troops killed one person, the Observatory said.

The Observatory, which has a network of activists on the ground, said it was not clear if the person killed was a civilian or a militia member. The Observatory also said a Russian convoy arrived on the scene to defuse the tension.

The Idlib offensive has also triggered clashes between Syrian and Turkish troops in which 13 Turkish soldiers have died in one week.

Turkish President Recep Tayyip Erdogan said Wednesday that Turkey could attack Syrian government forces anywhere in Syria if another Turkish soldier is hurt. He said Turkey is determined to force the Syrian military back from the gains it has made in Idlib, giving Syrian troops until the end of February to retreat.

“As of today, in the event of any minor harm to our soldiers, I announce that we will strike regime forces everywhere without being bound to Idlib or the boundaries of the Sochi agreement,” Erdogan told a ruling party meeting in Ankara.

Erdogan was referring to the 2018 agreement between Russia and Turkey in which the two countries’ troops would enforce a demilitarized zone in Idlib. As part of the agreement, Turkey established a dozen military observation posts in the province, where it backs some opposition groups. Several of these posts have been surrounded by government forces in recent weeks.

On Wednesday, opposition fighters, backed by Turkish artillery, launched an attack against new government positions along the highway.

Erdogan said he had spoken to Russian President Vladimir Putin by telephone about the situation in Idlib.

The Kremlin said the phone conversation underlined the need to fully implement the Russian-Turkish agreements.

Putin spokesman Dmitry Peskov said despite a pledge by Turkey, militants in Idlib have continued to launch attacks on Syrian troops and threaten Russian facilities in Syria. “It’s inadmissible and it runs contrary to the Sochi agreements,” Peskov said in a conference call with reporters.