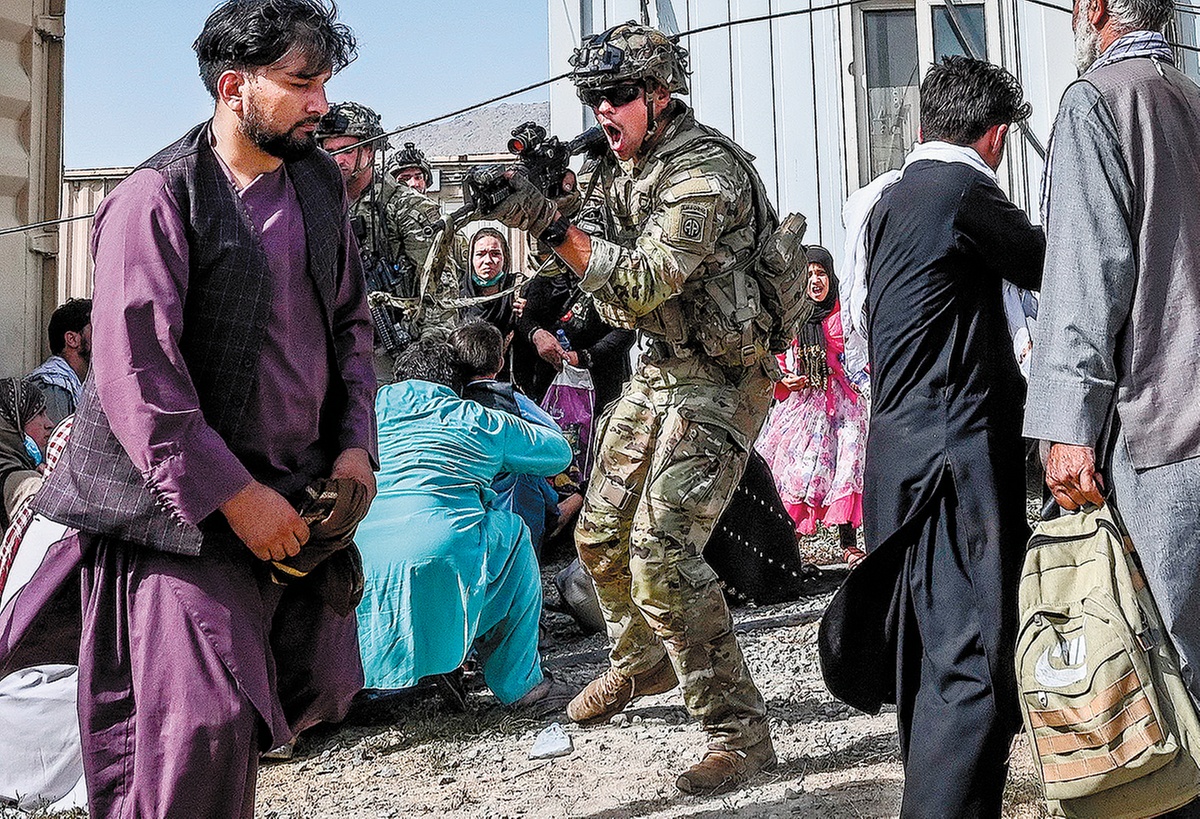 A US soldier points his gun at an Afghan passenger at Kabul's international airport on Monday. Thousands of people gathered at the airport as they tried to flee the capital after Taliban forces seized the city on Sunday and took control of the country. (Photo: AFP)

US soldiers killed two armed men at Kabul's airport Monday, according to the Pentagon.

"In the thousands of people who were there peacefully, two guys who had weapons brandished them menacingly. They were both killed," AFP quoted a US defense official, who insisted on anonymity, as saying.

Thousands of US troops took control of security at Afghanistan's main international airport outside Kabul since Saturday to enable the evacuations of US officials.

Afghans, meanwhile, massed at the airport and flooded out onto the tarmac seeking to board commercial flights out of the country.

Earlier, Reuters quoted witnesses as saying at least five people were killed at Kabul airport on Monday when people clung to departing aircraft as they were taking off from the Afghan capital.

Videos showed hundreds impeding a US military aircraft when it tried to take off, and there were reports that several were killed, either being crushed or falling from it after it took off.

China respects the Afghan people's wishes and choices and expects a steady transition of the situation in Afghanistan, the Foreign Ministry said on Monday.

The statement from the Taliban declaring the war in the country over has been noted by China, spokeswoman Hua Chunying said at a regular news briefing in Beijing. The Taliban said it will hold talks aimed at forming an "open, inclusive Islamic government" and take responsible action to ensure the safety of Afghan citizens and the foreign diplomatic corps.

Hua said that the war in Afghanistan has lasted for more than 40 years. To end it and realize peace is the hope of over 30 million Afghan people, as well as the international community and countries in the region, she said.

Kabul fell to the Taliban on Sunday, after it completed its takeover of the country in a lightning offensive that saw provinces fall without a fight following the earlier withdrawal of US troops.

Muhammad Naeem, a spokesman for the Taliban's political office, said on Sunday: "Today is a great day for the Afghan people and the mujahedeen. They have witnessed the fruits of their efforts and their sacrifices for 20 years."

Naeem said the form of the new regime in Afghanistan would be made clear soon. He added that the Taliban did not want to live in isolation and called for peaceful international relations.

"We have reached what we were seeking, which is the freedom of our country and the independence of our people," he said. "We will not allow anyone to use our lands to target anyone, and we do not want to harm others."

President Mohammad Ashraf Ghani fled the country on Sunday as the Islamists entered Afghanistan's capital Kabul virtually unopposed. Ghani later posted on Facebook that he left to avert bloodshed in the capital.

Hua said China hoped the Taliban's commitments will be implemented "to ensure a steady transition of the situation in Afghanistan and contain all kinds of terrorism and crimes so that the Afghans can get away from the war and rebuild their beautiful homeland".

The Chinese embassy in Kabul is still operating with all staff at their posts. While the embassy has arranged for most Chinese nationals in Afghanistan to leave, some are voluntarily staying and the embassy is maintaining close contact with them, she said. "They are all safe at the moment," Hua said.

China has maintained contact with the Taliban on the basis of fully respecting Afghanistan's sovereignty and the will of all parties in the country, she said.

"We hope all factions and ethnic groups in Afghanistan will unite as one and establish a broad and inclusive political structure that suits Afghanistan's national realities so as to lay the foundation for realizing enduring peace," Hua said.

The Taliban has repeatedly expressed its hope to develop good relations with China, which is expected to participate in the country's reconstruction and development," she said. The Taliban has also said it will never allow any forces to use Afghanistan to harm China. "We welcome this. China respects the right of the Afghan people to independently determine their own destiny and is willing to continue to develop friendly and cooperative relations with Afghanistan," Hua said.

Meanwhile, Russia said it has no plan to evacuate its embassy in Kabul. Zamir Kabulov, a Russian diplomat and presidential envoy to Afghanistan, said he was in direct contact with Moscow's ambassador in Kabul and added Russian embassy employees were working "calmly".

Kabulov said Russia was among a number of countries to receive assurances from the Taliban that their embassies were safe, according to Russia's RIA Novosti agency.

United Nations Secretary-General Antonio Guterres urged the Taliban and all parties to "exercise restraint" and said that the rights of women and girls, who suffered under the previous Taliban regime, need to be protected.

The UN Security Council was scheduled to meet on Monday to discuss the Afghanistan situation.

Many Western countries have started evacuating their diplomatic staff in Kabul, with reports of chaotic scenes at the city's airport.

The US State Department confirmed the safe evacuation of all US embassy personnel, mostly by helicopter, to the airport, whose perimeter is secured by the US military.