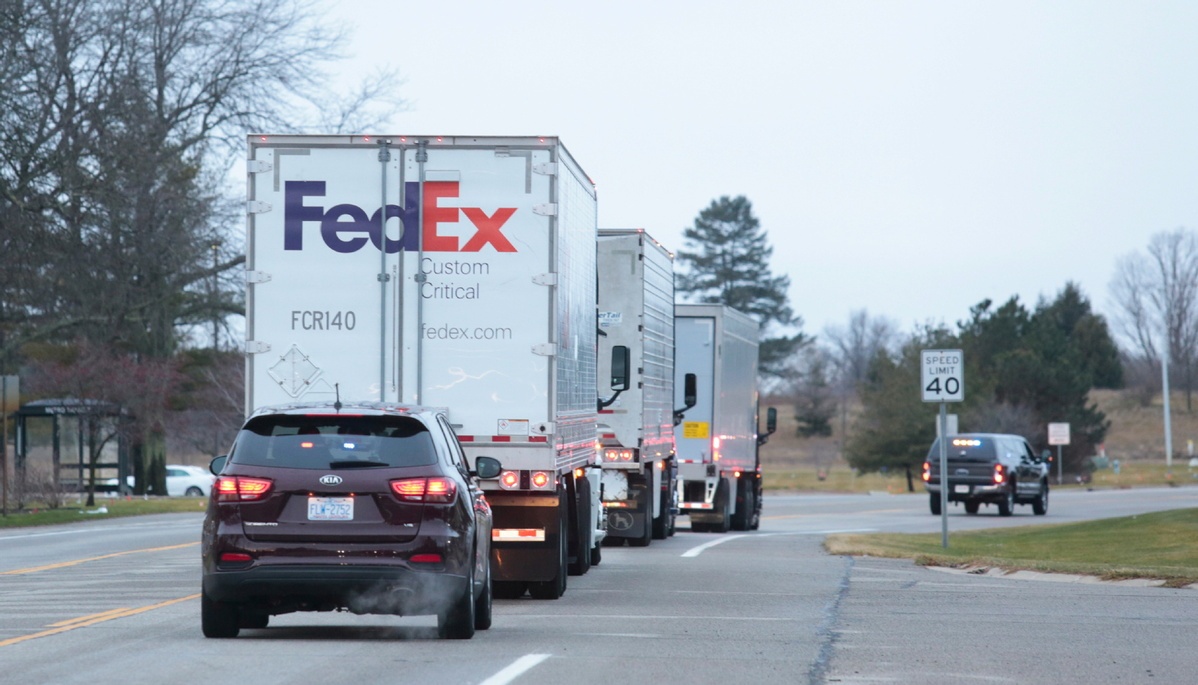 The COVID-19 pandemic in the US has worsened an existing truck-driver shortage, resulting in delays in transporting goods, higher prices for products, and constraints in the supply chain, according to industry experts.

After millions of Americans were directed to stay home since the start of the pandemic in March 2020, there has been an unprecedented demand for food and other essential items to be shipped.

In the US, 73 percent of all goods that people eat and use are moved by truck, including the COVID-19 vaccines.

The rocketing customer demand caused problems with supply chains and stretched demand for overworked truck drivers, according to the American Trucking Association (ATA), the largest trade organization for the trucking industry.

"Investments in our supply chain are desperately needed, including the roads and bridges that connect our ports, rail yards and airports to the National Highway System," ATA President and CEO Chris Spear told the US Senate Commerce, Science and Transportation Committee last month.

"Do that, and you will witness measurable efficiencies, including gains in productivity and safety, job growth and sustainable employment. We remain hopeful that federal action can solve this growing national crisis," he said.

As of 2018, the trucking industry has faced a shortfall of nearly 61,000 drivers and will need to hire roughly 1.1 million new ones over the next decade to keep pace with the economy's increased freight demands, the ATA said.

Kevin Johnson, CEO of Starbucks, the world's largest coffee chain, told an earnings call in April that some Starbucks supply chain partners have "struggled" to get deliveries from distribution centers to stores due to labor shortages.

The Chick-Fil-A restaurant chain said the industrywide truck-driver shortage meant it had to limit dipping sauces, adding that it was raising prices across its menu by 4 percent to pay for rising food costs.

General Mills, the multinational manufacturer and marketer of branded consumer foods, and Lamb Weston, an Eagle, Idaho-based food processing company, also cited freight problems in their businesses and said they turned to "spot trucking", which they paid more for to ensure that deliveries were made on time.

Kofi Bruce, General Mills CFO, told an earnings call in March that freight expenses would affect the company's margins in the first quarter.

Freight bottlenecks and congestion on highways cost the trucking industry an annual 1.2 billion hours of lost productivity, equivalent to more than 425,000 drivers sitting idle for an entire year and adding $75 billion to the cost of freight transportation, the ATA said.

In the US, there are 2 million heavy tractor-trailer truck drivers. However, the main truck-driver shortage is among long-haul truck drivers, which include at least 300,000 to 500,000 people.

The average base salary for a trucker in the US is $59,730, according to indeed.com. Long-haul truckers commonly work long hours. Many are paid for the number of miles they drive and not an hourly, daily or weekly wage, which can be a hardship.

The work is also dangerous, as truck drivers are 10 times more likely to be killed on the job when compared with the average worker, according to the Labor Department.

Age is also a barrier. Today's truck drivers average age 55 and up. Many will retire soon. There is a lack of younger men to replace them, and only 7 percent of the total number of drivers are women.

The ATA has spent years lobbying the federal government to change regulations in the industry to help attract new drivers.

It is pushing Congress to take up the Developing Responsible Individuals for a Vibrant Economy "Drive Safe Act" legislation that will lower the minimum legal age of interstate commerce truck drivers from 21 to 18.

In March, several bipartisan US senators reintroduced the act.

Looking toward the future, autonomous-vehicle makers believe that their trucks could help alleviate the driver shortage because such vehicles need less human interaction.

Robert Brown, director of Public Affairs for TuSimple, an autonomous trucking company in San Diego, California, and China, told China Daily: "TuSimple trucks don't get tired, distracted or need to rush anywhere; instead the technology is developed to drive the steadiest and safest path possible. … We believe that autonomous and long-haul truck drivers will work in collaboration for many years to come."