WORLD US, Turkey lash back at France for saying NATO is experiencing "brain death"

US, Turkey lash back at France for saying NATO is experiencing "brain death"

WASHINGTON, Nov. 13 (Xinhua) - Both presidents of the United States and Turkey Wednesday showed dismay at their French counterpart, who said the North Atlantic Treaty Organization (NATO) is experiencing "brain death." 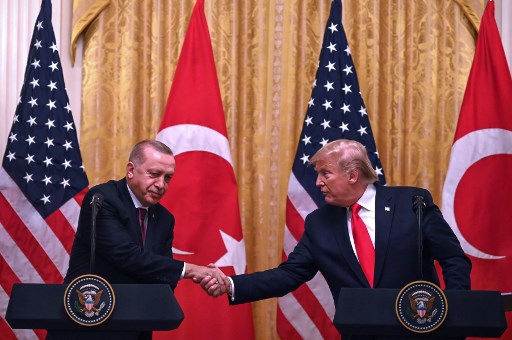 US President Donald Trump and Turkey's President Recep Tayyip Erdogan (L) take part in a joint press conference in the East Room of the White House in Washington, DC on November 13, 2019. (Photo: AFP)

At a White House meeting attended by US lawmakers, US President Donald Trump said a lot of people, including Turkish President Recep Tayyip Erdogan, were "very disappointed" at French President Emmanuel Macron's remark.

"I think that bothered the president very much. I don't think he was very happy about it. A lot of other people feel that way, too," Trump said.

"It's unacceptable," Erdogan said in response.

US Senator Jim Risch, who was at the meeting, said he hoped Macron "would rethink those comments."

"I think that they were ill-advised at the time made, and we would certainly hope that he would rethink those," Risch said.

In an interview recently published by The Economist magazine, Macron said "what we are currently experiencing is the brain death of NATO," as he slammed Washington for the lack of commitment and leadership to the bloc.

According to the White House, Trump and Macron discussed issues relating to NATO in a phone call Monday.

Trump is expected to attend NATO leaders meeting in London early December to commemorate the alliance's 70th anniversary as solidarity of NATO countries is being widely questioned.

Trump is also set to discuss burden-sharing and security issues with NATO Secretary-General Jens Stoltenberg on Thursday in Washington.