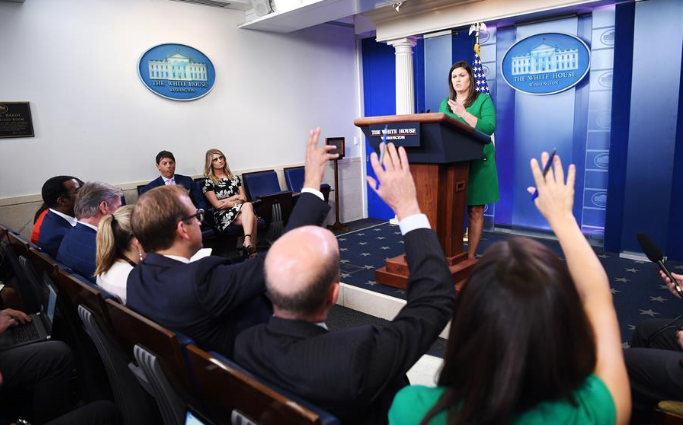 The White House on Wednesday condemned Turkey's doubling of tariffs on US cars, alcohol and tobacco imports, calling the action "a step in the wrong direction".

Turkey took the action in response to what it called the Trump's administration's attack on its economy. The United States doubled tariffs on Turkish steel and aluminum last week, which contributed to a tumble in the Turkish lira.

"The tariffs from Turkey are certainly regrettable and a step in the wrong direction. The tariffs that the United States placed on Turkey were out of national security interest. Theirs are out of retaliation," White House spokeswoman Sarah Sanders told reporters.

Tensions between the two NATO allies have been strained amid Turkey's detention of American pastor Andrew Brunson. Turkey has accused Brunson of backing a coup attempt against Turkish President Tayyip Erdogan two years ago.

In addition to its decision to ramp up tariffs on imports of Turkish steel and aluminum, the Trump administration earlier this month imposed sanctions on two top officials in Erdogan's Cabinet as part of its efforts to pressure Turkey into freeing Brunson.

"The tariffs that are in place on steel will not be removed with the release of pastor Brunson. The tariffs are specific to national security," she said.

"The sanctions, however, that have been placed on Turkey are specific to pastor Brunson and others that we feel are being held unfairly, and we would consider that at that point," Sanders added.

On Friday, US President Donald Trump said he had authorized higher tariffs on aluminum and steel imports from Turkey.

A decree published in Turkey's Official Gazette and signed by Erdogan doubled the tariffs on cars to 120 percent, on alcohol to 140 percent and on leaf tobacco to 60 percent.

Tariffs were also doubled on goods such as cosmetics, rice and coal.

"The import duties were increased on some products, under the principle of reciprocity, in response to the US administration's deliberate attacks on our economy," Vice-President Fuat Oktay said on Twitter.

The row with Washington has helped drive the lira to record lows, with the currency losing more than 40 percent of its value against the dollar this year, prompting central bank liquidity moves to support it.

Erdogan has said Turkey is the target of an economic war, and has made repeated calls for Turks to sell their dollars and euros to shore up the currency. On Tuesday, he said Turkey would boycott US electronic products.

The collapse of the lira has caused trauma as Turks see their purchasing power slashed, but bargain-hunting foreign tourists visiting the country at the peak of the summer season are cashing in on a currency windfall.