WORLD US unemployment rate falls to 8.4% even as hiring slows

US unemployment rate falls to 8.4% even as hiring slows

The U.S. unemployment rate fell sharply in August to 8.4% from 10.2% even as hiring slowed, with employers adding the fewest jobs since the pandemic began. 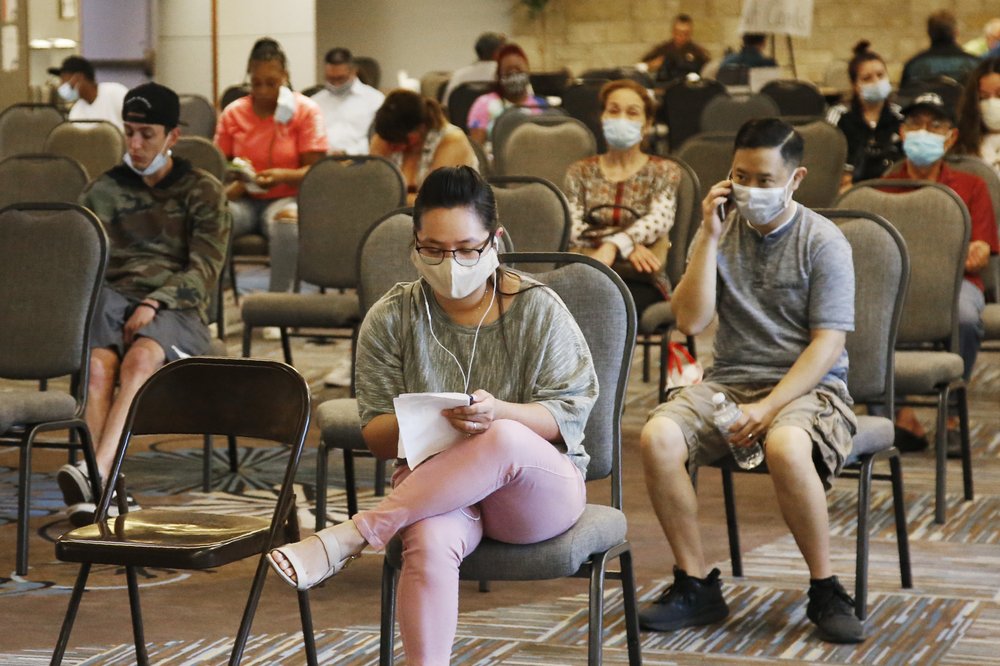 In this July 9, 2020, file photo, people wait to speak with representatives from the Oklahoma Employment Security Commission about unemployment claims in Midwest City, Okla. (Photo: AP)

Employers added 1.4 million jobs, the Labor Department said Friday, down from 1.7 million in July. The U.S. economy has recovered about half the 22 million jobs lost to the pandemic.

Friday's report from the Labor Department added to evidence that nearly six months after the coronavirus paralyzed the country, the economy is mounting only a fitful recovery. From small businesses to hotels, restaurants, airlines and entertainment venues, a wide spectrum of companies are struggling to survive the loss of customers with confirmed viral cases still high.

After an epic collapse in the spring, when the economy shrank at a roughly 30% annual rate, growth has been rebounding as states have reopened at least parts of their economies. Yet the recovery remains far from complete.

Many economists think significant hiring may be hard to sustain because employers are operating under a cloud of uncertainty about the virus. Daily confirmed case counts have fallen from 70,000 in June to about 40,000. The decline has leveled off in the past week and the viral caseload remains higher than it was in May and June.

As a result activities like restaurant dining and air travel are still far below pre-pandemic levels. Most economists say a meaningful economic recovery will likely be impossible until the coronavirus is brought under control, most likely from the widespread use of a vaccine.

THIS IS A BREAKING NEWS UPDATE. AP's earlier story is below:

The United States keeps regaining more of the jobs that vanished when the viral pandemic flattened the economy early this spring. Yet so deep were the layoffs that began in March that millions of Americans remain burdened by job losses that might prove permanent.

Economists have forecast that employers added 1.4 million jobs in August and that the unemployment rate fell from 10.2% to 9.8%, according to a survey by data provider FactSet. That rate would still be just below the peak unemployment level of the 2008-2009 Great Recession.

While a monthly gain above 1 million would show that some businesses are still willing to add workers, it would take many months to return to pre-pandemic job levels even if that pace could be sustained. And many economists think hiring is slowing. The economy still has roughly 13 million fewer jobs than it did when the coronavirus struck in March.

Friday's jobs data will be the second-to-last employment report — for most voters, the most visible barometer of the economy — before Election Day, Nov. 3. President Donald Trump faces the daunting task of seeking re-election in the worst economic downturn since the 1930s. Yet voters in surveys have generally given him higher marks on the economy than they have on other aspects of his presidency.

The jobs report coincides with growing signs that more companies are  making permanent job cuts rather than temporary furloughs. That trend could keep the unemployment rate persistently high. It is typically harder for an unemployed worker to find a new job at a new company or in a new industry than to return to a previous employer.

Casino and hotel operator MGM Resorts, slammed by declines in travel and tourism, said last week that it's eliminating 18,000 jobs. Coca Cola, which derives half its sales from stadiums, theaters and other venues that have been largely shut down, is offering buyouts to 4,000 employees. Salesforce said it is cutting 1,000 jobs. Bed, Bath & Beyond will shed 2,800.

A Federal Reserve report this week based on anecdotal reports from businesses found "rising instances of furloughed workers being laid off permanently as demand remained soft."

Roughly 29 million Americans are receiving state unemployment aid, although their total benefits, on average, have shrunk by more than half since the expiration of a $600-a-week federal supplement more than a month ago. The Trump administration has set up a program that will provide some of the unemployed with $300 a week.

But new rules and requirements will make many of the unemployed ineligible. Only people who receive at least $100 a week in state unemployment aid will qualify for the $300 federal supplement — a requirement that could exclude at least 850,000 Americans.

The ongoing job losses and economic slump have left a rising share of Americans out of work for longer periods. From June to July, the number of people who were unemployed for 15 weeks or longer tripled to more than 6 million.

One consequence is that rising stress and anxiety are evident at therapists' offices and mental health hotlines around the country. Calls from March through July to the U.S. government-funded Disaster Distress Helpline, which offers counseling and emotional support,  surged 335% from the same period last year.

And half of U.S. adults reported at least some signs of depression, such as hopelessness, feelings of failure or an inability to derive pleasure from daily activities, in a survey published Wednesday in the medical journal JAMA Network Open. That amounted to twice the rate from a survey two years ago.

"Not many days go by where I don't have a couple where one partner or both are not working or furloughed," said Todd Creager, a therapist in Southern California who treats mostly middle- to upper-middle-class adults.

What's more, the economy appears to be operating on two tracks, resulting in an uneven and unequal recovery. Manufacturers are enjoying a solid rebound in demand for cars, appliances and electronics, with factory orders nearly back to pre-pandemic levels.

Home sales are also booming. So are home prices. Sales of existing homes surged by the most on record in July and are now nearly 9% higher than a year ago.

In addition, wealthier and well-educated workers have been far less likely to lose jobs to the pandemic than lower-income and minority workers have, in part because of a greater ability to work from home.

The coronavirus has also reshaped much of the consumption of affluent households: While spending less on restaurants and at shops and movie theaters, they are buying new homes to gain more space or renovating their houses to serve as workplaces as well as homes.