WORLD US unemployment systems tested by surge of applicants

US unemployment systems tested by surge of applicants 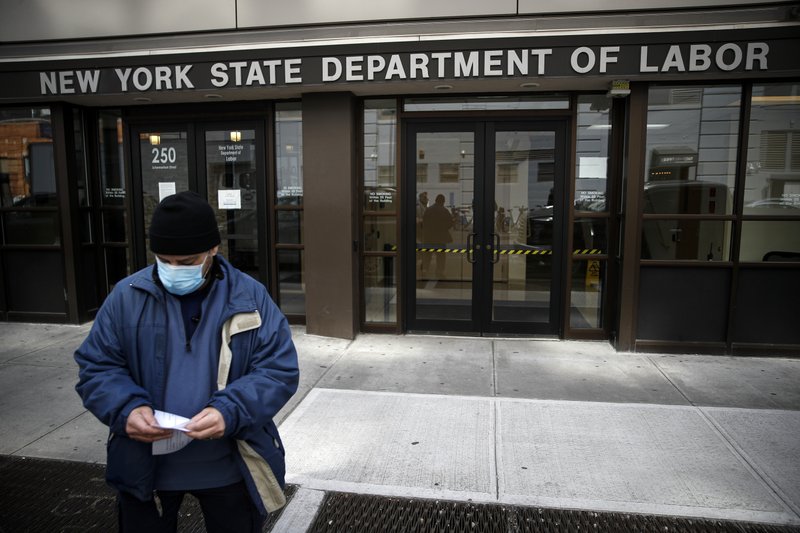 FILE - In this Wednesday, March 18, 2020 file photo, Visitors to the Department of Labor are turned away at the door by personnel due to closures over coronavirus concerns in New York. (Photo: AP)

Americans are seeking unemployment benefits at unprecedented levels due to the coronavirus, but many are finding more frustration than relief.

State websites and phone lines across the country have been overwhelmed with applicants — causing sites to crash, phone lines to ring busy and much-needed payments to be delayed. While many states are doing their best to respond — adding staff, updating technology and streamlining the process — it’s tough to keep up with the pace of demand.

About 10 million people applied for unemployment benefits in the two weeks ended March 27.

Ohio handled twice as many claims in the past two weeks than it had over the past two years. The state has increased its online capacity for processing claims 20 times, added hundreds of workers, yet users might still encounter delays.

New York’s Department of Labor said its phone system recorded more than 8.2 million calls last week, compared with 50,000 in a typical week. Its online filing system received 3.4 million visits during that time, compared to the usual 350,000. The site has crashed several times in recent weeks under the burden.

To handle the influx, New York has added 20 servers, hundreds of staff and expanded its hours of operations. It’s also trying to reduce the surge— as are Colorado, Kentucky and Michigan — by asking people to file on different days based on the first letter of their last name.

“It is not working as smoothly as I would like to see it,” Governor Andrew Cuomo said. “It’s compounding people’s stress.”

It’s a problem playing out across the nation.

“Financially stressed Americans should not have to spend hours on the phone waiting for someone to process their application or answer their questions,” Senators Chuck Schumer, Ron Wyden and Bernie Sanders said in a letter Monday to the U.S. Department of Labor.

They urged Secretary Eugene Scalia to ensure states get funding quickly for administrative support that they’ve been granted under recent legislation. The Department of Labor did not comment in response.

Congress has passed a massive relief package that expanded who is eligible for unemployment benefits — adding gig, contract and other part time workers who wouldn’t normally qualify. Benefits are open to others who’ve been impacted, such as workers who were quarantined, left work due to risk of exposure or to care for a family member.

It’s welcome aid for suffering Americans, but it adds to the volume and confusion for administering benefits.

New Mexico’s Workforce Solutions Department said that is was deluged with more than a half-million calls in one day — in a state of 2 million residents — as the government began expanded eligibility guidelines, but it was too soon at that time for the state to process those claims.

The crush on the system is leaving some Americans in need frustrated and empty handed for now.

Duane Shepherd, 53, tried to file for unemployment for this week after getting laid off from his oil-and-gas servicing job in rural Vernal, Utah. He gave up after the online system barred him from backing up to fix a minor error. The online-chat function was unavailable and phone calls were rejected because of high volume. He considered visiting a local office in person, but heard he’d be routed back to the phone system. Shepherd plans to try to file again, and hopes to live on his small savings as he looks for work.

“The system is broken, it’s absolutely broken. I don’t know how people aren’t climbing the walls with frustration,” he said.

Those filing for unemployment are being encouraged to keep at it and be patient.

It takes time to process an application, typically two to three weeks, said Michele Evermore, a senior policy analyst at the National Employment Law Project. But benefits are retroactive — meaning people will be reimbursed for the full period of unemployment, not just from when their claim is approved.

“The unemployment lines (although virtual) now are like the lines for toilet paper have been,” Evermore said. “People are just going to have to keep trying for a while.”

The eligibility and process varies by state so workers should check the local rules. In general though, applicants should try to file online unless they must call. And consider trying websites at off-hours when traffic is lower.

Be prepared with contact information for all their employers for the past 18 months, as well as proof of income. Double-check all your information as even minor errors can slow a claim.

Keep track of your efforts and if you are denied, you can appeal.