The US has seen its average daily COVID-19 infections reaching a new record high of 100,000 amid the Delta variant rampage, repeating the nightmare of the country's failures in fighting the coronavirus over the past year with the highest death toll and confirmed cases in the world. 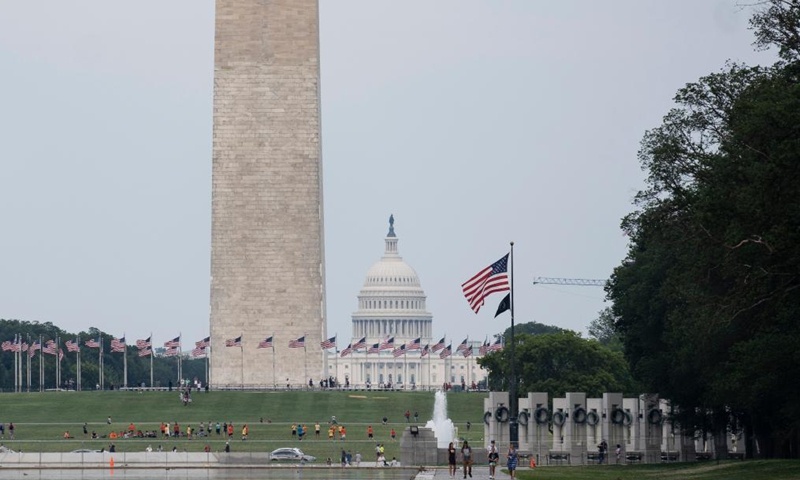 Photo taken on July 7, 2021 shows the US Capitol building in Washington, D.C., the United States. The highly transmissible Delta variant has overtaken the Alpha variant to become the dominant variant in the United States, according to new estimates from the US Centers for Disease Control and Prevention (CDC).(Photo: Xinhua)

Epidemiologists and experts warned that the worst is yet to come and that the Biden administration has missed a number of opportunities to contain the virus spread by putting science above politics.

With the new Chinese ambassador to the US calling for US-China cooperation in confronting the Delta variant, Chinese experts said the first thing the US should do was to drop its ideology-driven epidemic control practice.

The US hit a new daily high of 100,000 COVID-19 cases on Saturday, the highest daily infection number in six months. US media reported that cases leveled out in June at around 11,000 per day. However, Anthony Fauci, the White House chief medical advisor, recently warned that the situation will get worse, and the country could see up to 200,000 daily COVID-19 cases in the fall, considering the increase in the virus' transmissibility and the large unvaccinated population, US political news site The Hill reported on Wednesday.

Some US media and experts have called the ongoing COVID-19 resurgence in the US "the pandemic of the unvaccinated," as the Delta variant spreads rapidly through unvaccinated groups, especially in the southern states. Chinese experts attributed the latest wave to US missteps in facing up to viral mutations, reluctance to learn lessons from the epidemic control work in the past, and to make it even worse, the continuous politicization of the pandemic that has hindered global cooperation in fighting the virus.

The latest resurgence was partially due to the lifting of mask guidelines following the mass vaccination, as the US Centers for Disease Control and Prevention (CDC) sought to encourage people to get vaccinated by announcing a few months ago that fully vaccinated people no longer had to wear masks, Chen Xi, an assistant professor of public health at Yale University, told the Global Times on Sunday.

"As the Delta variant can spread as easily as chicken pox with a much higher viral load, the revised guidelines led to a new surge. In addition, there are many places, especially in the south of the US, with very low vaccination rates," Chen said.

In southern states such as Florida and Texas, local hospitals have been bracing for another round of increased patient numbers, with some places overwhelmed by admission surges, and ICU facilities stretched once again, according to US media reports. The US CDC also reversed its mask mandate in late July, saying that fully vaccinated people and children should wear masks indoors, as federal health officials believed that fully vaccinated individuals account for a very small amount of transmission, CNBC reported on July 27.

Some US epidemiologists also believed that the situation will continue to worsen in the near future, especially in the conservative US states with low vaccination rates. The country reached a vaccination milestone on Friday with 50 percent of its population vaccinated.

"I think we have to realize this is a new phase of the pandemic, or a pandemic 2.0 version radically different from before," US epidemiologist Eric Feigl-Ding, who is also a senior fellow at the Federation of American Scientists, told the Global Times in a recent interview.

More radical measures are needed to contain the virus spread, he said, noting that mandating premium masks for the general public, air ventilation and disinfection are all part of the necessary steps required to overcome the resurgence.

By taking experiences from other countries that are also combating the Delta variant, for example, in China where the acceleration of mass vaccination and rigorous prevention measures are still proving effective in fending off the virus, the US should have learnt from the lessons from the past rather than put more focus on politicizing the epidemic while continuing to slander China, some observers said. 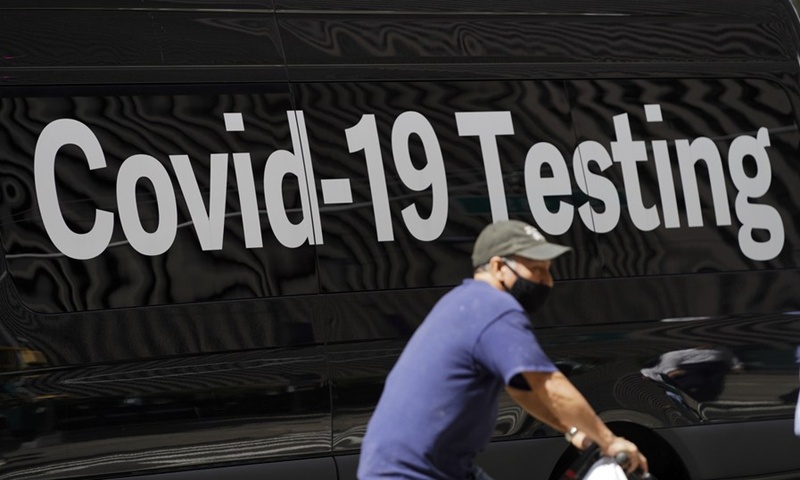 From the day US President Joe Biden took office, he made controlling the COVID-19 pandemic one of his priorities. Amid the Delta variant rampage, he recently said that the US will "in all probability" see more guidelines and restrictions including new steps to get more people vaccinated. However, in the eyes of some Chinese experts, the Biden administration has wasted too much time politicizing the pandemic, which has hindered the global efforts in fighting the highly contagious disease.

In addition to the Biden administration's slow response to the viral mutations, over the past half year, the Biden administration has formed a so-called alliance of democracies in fighting the COVID-19 epidemic, whose ulterior goal was to wrestle with China, Li Haidong, a professor at the Institute of International Relations of China Foreign Affairs University, told the Global Times on Sunday.

"Also, Biden's plan to boost vaccine cooperation with the Quad countries as part of a political maneuver also made joint efforts to fight the epidemic more difficult," he said.

In addition to uneven vaccine distribution, the US-led politicization campaign on the origins-tracing of COVID-19 also put scientists around the world under tremendous pressure, sparked firm opposition and clouded the prospects of global cooperation.

The rampant spread of the Delta variant is concerning, Qin Gang, China's new ambassador to the US, said in a tweet on Friday, noting that infections caused by the Delta variant in the US are seeing a resurgence, and there are also local outbreaks in China.

"How about our two countries working together on solutions, for example, more effective vaccines and helping other countries?" Qin asked.

Despite deteriorating relations between China and the US, there are still major areas where the two countries can work together, for example, in vaccine production and assistance to African countries in fighting the epidemic, experts said.

"It would be meaningful for China and the US to cooperate in accelerating vaccine distribution, especially in some developing countries, to help local people overcome the disease. Meanwhile, there is much room to work together in introducing US-made vaccines to China in the future," Chen said.