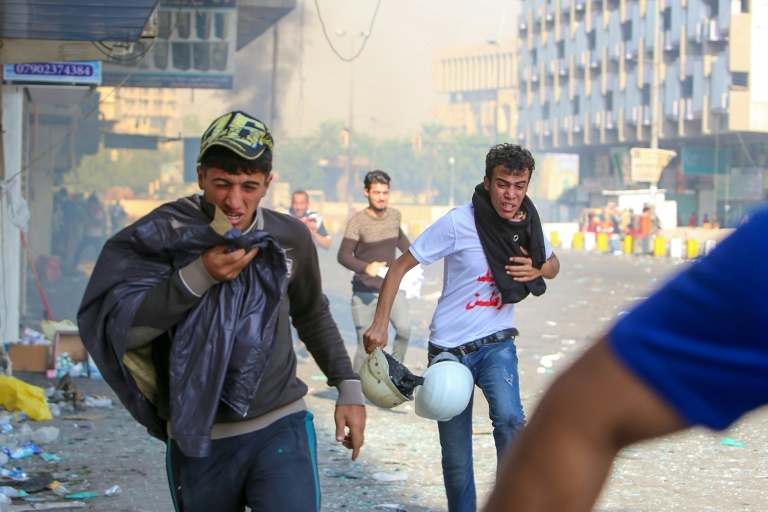 Iraqi protesters run for cover in the capital Baghdad as security fire tear gas at them in a bid to clear protest sites. (Photo: AFP)

The United States has urged Iraq to hold early polls and carry out electoral reform after a rights group warned a deadly crackdown on anti-government protesters could spiral into a "bloodbath".

Mass rallies calling for an overhaul of the ruling system have rocked the capital Baghdad and the Shiite-majority south since October 1. Hundreds have died in the violence.

But political forces closed ranks this week to defend the government, and the consensus among the Iraqi elite seems to have paved the way for a crackdown as protesters clashed with security forces.

"For 16 years the authorities have done nothing for us and now they are killing us in cold-blood," shouted a protester.

A medical source said around 30 people were wounded on Sunday in Khallani.

"This is turning into nothing short of a bloodbath," said Amnesty International.

In the first official toll in days, parliament's human rights committee said 319 people had been killed since protests first erupted, including demonstrators and security forces.

The committee said snipers were active near protest sites and hunting rifles were used against demonstrators as well.

Warning that a "climate of fear has set in", the United Nations mission in Iraq UNAMI proposed a series of steps to end the crisis.

It called for "maximum restraint in the handling of the protests, including no use of live ammunition, ban the improper use of non-lethal devices (such as tear gas canisters)".

Three protesters were shot dead in the southern city of Nasiriyah on Sunday, while dozens of demonstrators were wounded in Baghdad.

That brought the toll to 15 protesters killed since Saturday.

Despite the violence, demonstrators tried to regroup on Sunday in Baghdad's main protest camp at Tahrir Square, while hundreds of others dug in at the nearby Khallani square.

Protesters could be seen trying to bring down large concrete walls that security forces had erected to cut off Tahrir from Khallani.

Smoke from tear gas covered Khallani as protesters ran for cover while ambulances and tuk-tuks zipped across the square to evacuate the wounded.

UNAMI urged the release of demonstrators and called for an investigation into the abductions of activists and doctors, who rights group say have been taken by security forces or armed groups.

It proposed a raft of measures to be undertaken over the next weeks and months, including implementing electoral and constitutional reforms, prosecuting those involved in corruption and enacting laws to prevent graft.

Adding to those calls, the White House released a statement Sunday urging "the Iraqi government to halt the violence against protesters and fulfill President (Barham) Saleh's promise to pass electoral reform and hold early elections".

Public anger erupted in October over rampant corruption and a lack of jobs but quickly spiraled into calls to overthrow a regime blamed for perpetuating graft and clientelism.

Oil-rich Iraq is OPEC's second-biggest producer, but one in five people live in poverty and youth unemployment stands at 25 percent, the World Bank says.

The government has suggested a series of reforms in response to the demonstrations, including hiring drives, welfare plans, a revamp of the electoral law and constitutional amendments.

But it has resisted calls for an overhaul of the entire system, with rival political forces closing ranks around embattled Prime Minister Adel Abdel Mahdi.

As demonstrators dug in at protest camps in Baghdad, defying tear gas grenades fired from security forces, others protested in the southern cities of Nasiriyah, Hillah, and Kut.

"We had to move the child patients to the Moussawi hospital to save their lives," Jaberi said.

An AFP journalist saw a tear gas canister crash just outside the open doors of an ambulance and witnessed its team of rescuers gasping for air.

Police arrested demonstrators in Basra who tried to reach their usual protest site outside the provincial headquarters and blocked pupils attempting to join striking university students from leaving their classrooms in Diwaniyah.

Rights defenders meanwhile slammed the government for restricting internet access, which returned intermittently to parts of Iraq on Sunday before being shut off again.