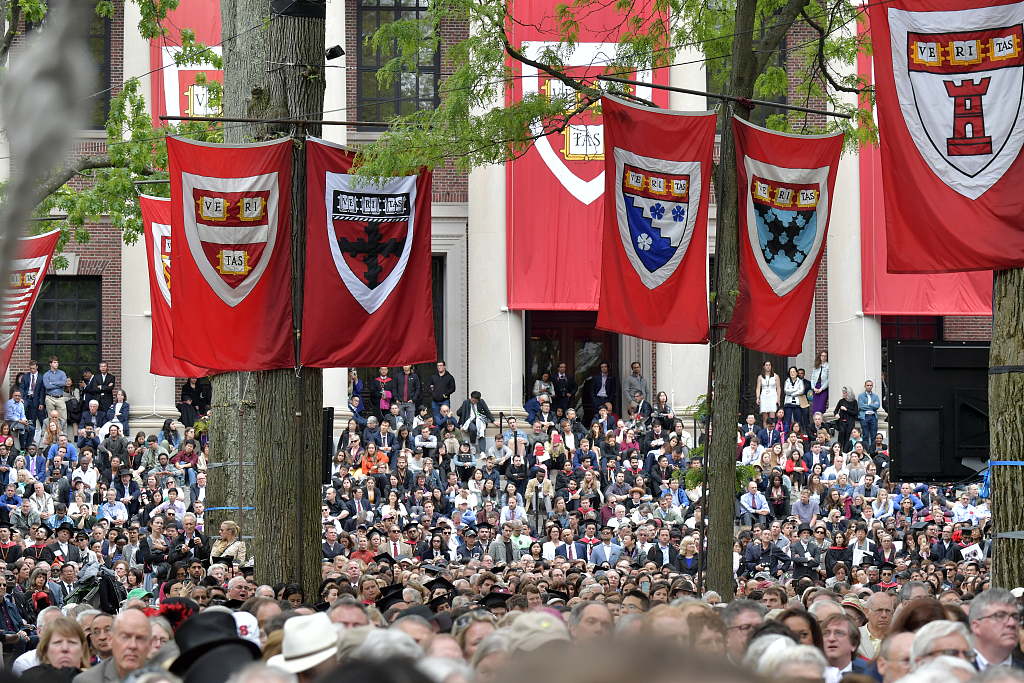 General atmosphere at the Annual Meeting of the Harvard Alumni Association at Harvard's 368th annual Commencement at Harvard University on May 30, 2019 in Cambridge, Massachusetts. (Photo: VCG)

The US government has recently tightened visa control for students from China amid trade tensions.

China's Ministry of Education issued an official warning to US-bound Chinese students about potential risks they may encounter.

The ministry said the visa applications of some Chinese hoping to study in the United States have recently been restricted, by an extended review process, shortened validity period, and an increased rejection rate, which would affect their plans to study or complete their studies in the United States.

More Chinese students have encountered visa problems in recent years and are concerned over the possibility of completing their studies in the United States.

"My roommate is a PhD candidate in physics and won't dare go back to China for vacation because he may need two or three months to get a visa to return to the US," said Columbia University PhD student surnamed Ding.

Ding said one of his friends who studies machine learning missed a conference held in California because his visa was subjected to a two-month review.

Chung-ling Lee, a student from the Massachusetts Institute of Technology (MIT), said some science and engineering professors really like to recruit Chinese students because of their studious nature.

However, visa risks and delays could discourage professors from recruiting Chinese students in the future, said Lee.

Jon R. Taylor, a political science professor at University of St. Thomas in Houston, told Xinhua in a recent interview that the increased scrutiny has created apprehension among many Chinese students and scholars currently in the United States, adding he is deeply concerned over the situation.

Among the more than 10,300 people supported by Chinese government scholarships in 2018 to study in the United States, 3.2 percent cancelled trips to the United States due to visa problems, according to statistics from the China Scholarship Council.

Yang Xinyu, minister counselor for educational affairs at the Chinese Embassy in the United States, cautioned Chinese students to be more prudent when choosing study destinations overseas because graduate students, especially those in the science, technology, engineering and math fields, have been disproportionately affected by US visa restrictions since last year.

US academia is concerned that such visa restrictions on Chinese students would impoverish the country's proud intellectual environment.

Taylor said longer waiting time for visas will discourage many Chinese students from joining American universities, and they are likely to apply to European, Australian and Canadian universities.

He also said the scrutiny will result in the loss of visiting Chinese scholars who can and do provide important research.

"It could likely lead to diminished cooperation and collaboration in a number of areas of scholarly research. And that could lead to long delays in disseminating important findings that could help us to understand or solve a host of issues confronting the world today," said Taylor.

More than 3,300 of these students are from China, representing 48 percent of all international students, according to Holloway.

"If fewer of these bright students came to the University of Michigan, it would be harder for us to create new knowledge and our intellectual environment would be impoverished," he said.

"We may increasingly lose some of the very best students to universities in other countries, including Canada, the UK and Australia. This will be a benefit to those countries, and a loss for the United States," he said.

Industry insiders have noted the possible economic losses due to the increased scrutiny.

American universities rely on international students' tuition to subsidize other students who cannot afford to pay for their education, said Joel Butterly, CEO of InGenius Prep which has six offices in China.

InGenius Prep offers its client admission counseling service to help them get into their dream colleges. More than 50 percent of the company's clients are Chinese students.

While the company's business has not been hit by the increased level of restrictions yet, Butterly said such restrictions are self-defeating.

In 2017, the Institute for International Education based in New York estimated that international students directly contributed about 42 billion dollars to the US economy, and this does not include the impact of new companies and businesses that many of these students start after they graduate.

The visa restrictions are seen by many as the extension of the US-initiated trade dispute with China. Using students and scholars as pawns against China will profoundly hit relations between the two countries, industry insiders have noted.

Carroll urged the institutions of higher learning on both sides to expand the ties and programs for a better future "for our countries and for the world."

Kevin Pitts, vice provost for Undergraduate Education at the University of Illinois at Urbana-Champaign, told Xinhua that Chinese students are important members of the campus community and make major contributions to the excellence of the university.

"We continue to work to ensure that our campus is a welcoming place for students from China," he said.

Coleman said she is deeply troubled by the global perception that America is becoming less welcoming to talented students and researchers.

She affirmed that AAU is "firmly committed to ensuring that our institutions should remain places open to the most gifted and talented individuals."