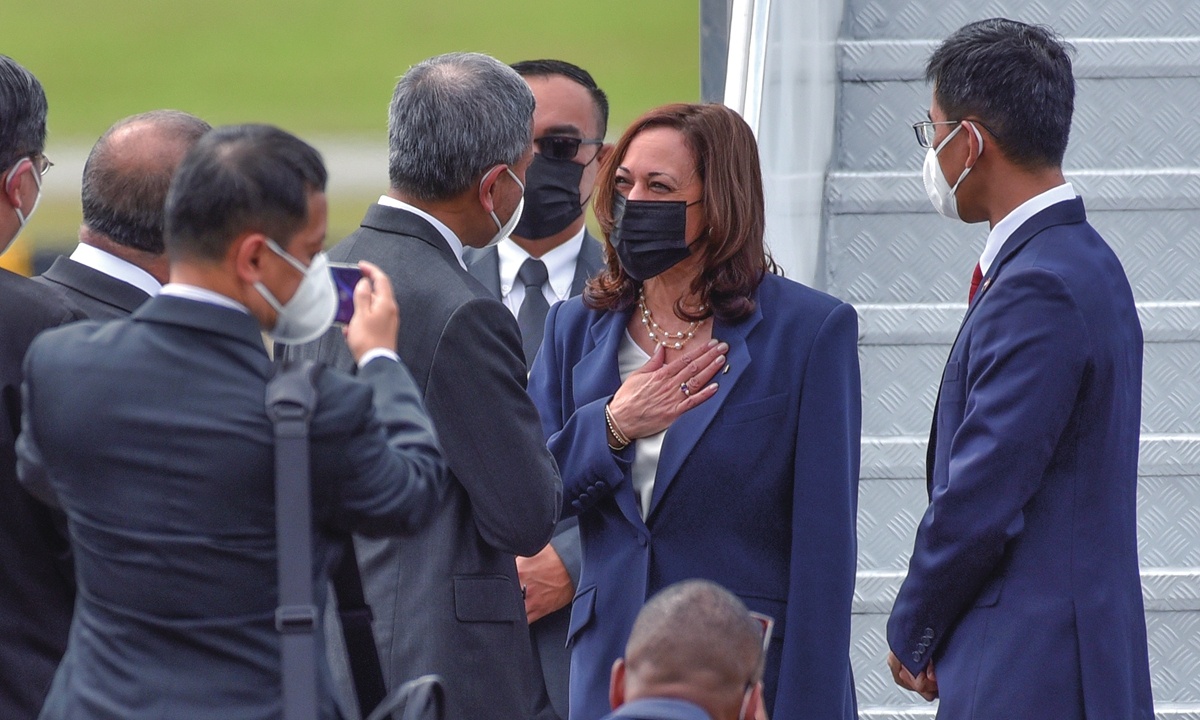 US Vice President Kamala Harris is greeted by Singapore Foreign Minister Vivian Balakrishnan and his delegation as she arrived at Paya Lebar Air Base in Singapore on Sunday. (Photo: IC)

US Vice President Kamala Harris vowed "enduring engagement" in Asia on Monday, offering reassurances of Washington's commitment to the region even as the US completes its chaotic withdrawal from Afghanistan and the Taliban takeover.

The hard-line Islamists' swift return to power a week ago, and desperate scenes of thousands trying to flee, have cast a shadow over the US' status as a global superpower.

But on a visit to Singapore, her first stop on a trip that will also include Vietnam, Harris repeatedly insisted that Washington could be depended on.

"Our administration is committed to enduring engagement in Singapore, into Southeast Asia and the Indo-Pacific," Harris told a press conference alongside Singapore's leader.

"The reason I am here is because the United States is a global leader, and we take that role seriously."

But she dodged questions about whether US credibility had been damaged by the Afghan debacle, saying her government's focus was on "evacuating American citizens, Afghans who worked with us and vulnerable Afghans, including women and children."

Singaporean Prime Minister Lee Hsien Loong welcomed the vice president's reassurances and said Singapore was offering a military aircraft to help in the chaotic evacuation from Kabul airport overseen by the US army.

But he also expressed hopes that "Afghanistan does not become an epicenter for terrorism again."

US President Joe Biden's administration is seeking to reset relationships in Asia after the turbulent Trump era.

But analysts say the seizure of power by the Taliban, and rapid collapse of US-trained Afghan forces have caused fresh concerns about US dependability.

Harris is also facing criticism for being tone-deaf in going ahead with a visit to Vietnam as US forces struggle to evacuate tens of thousands of people.

The crisis has prompted comparisons with the trauma of 1975 in Saigon, when US helicopters ferried final evacuees from the embassy roof, as Viet Cong troops advanced.

But US officials insist the trip was planned long before the Afghan crisis and is focused on Washington's broader strategic goals in Asia.

After arriving at the weekend, Harris began her official engagements Monday by holding talks with Lee as the US and Singapore signed agreements on combating cyber threats, climate change, and the coronavirus pandemic.

She was formally welcomed at the president's official residence, inspected a guard of honor and was presented with an orchid named after her, a typical honor for a visiting dignitary.

Harris also visited a naval base and addressed US sailors aboard the visiting USS Tulsa warship.

She is expected to depart for Hanoi, Vietnam on Tuesday evening.