WORLD US VP debate turns into clash of bitter barbs

US VP debate turns into clash of bitter barbs 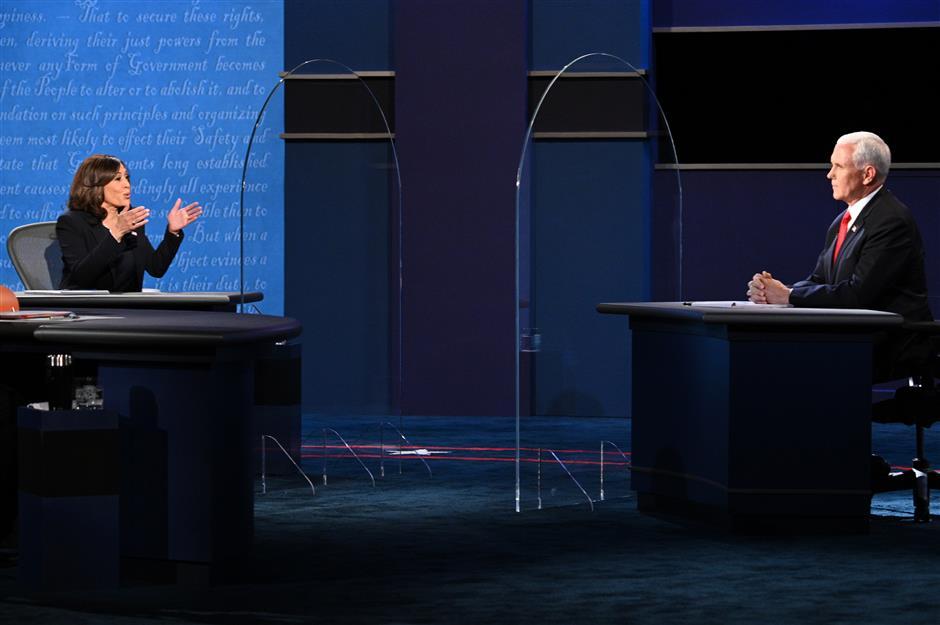 Trading barbs through plexiglass shields, Republican Mike Pence and Democrat Kamala Harris turned the only vice presidential debate of 2020 into a dissection of the Trump administration’s handling of the coronavirus pandemic, with Harris labeling it “the greatest failure of any presidential administration.”

Pence, who leads the president’s coronavirus task force, acknowledged that “our nation’s gone through a very challenging time this year,” yet vigorously defended the administration’s overall response to the pandemic.

The meeting, which was far more civil than last week’s chaotic faceoff between President Donald Trump and Democrat Joe Biden, unfolded against an outbreak of coronavirus now hitting the highest levels of the US government.

With less than four weeks before Election Day, the debate was one of the final chance for Republicans to reset a contest that could be slipping away. They’re hoping to move the campaign’s focus away from the virus, but the president’s infection and his downplaying of the consequences are making that challenging.

Republicans desperately want to cast the race as a choice between two candidates fighting to move the country in vastly different directions. Biden and Harris, they say, would pursue a far-left agenda; the Democrats say Trump’s administration will stoke racial and other divides, torpedo health care for people who aren’t wealthy and otherwise undercut national strength.

Harris, 55, condemned the police killings of Breonna Taylor in Kentucky and George Floyd in Minnesota and spoke about the protests against racial injustice in policing that followed, which Trump has portrayed as “riots” as he calls for law and order.

“We are never going to condone violence but we must always fight for the values that we hold dear,” Harris said.

Pence, 61, said his heart breaks for Taylor’s family but he trusts the US justice system. He called it “remarkable” that Harris, as a former attorney general and prosecutor, would question the grand jury’s decision in the case not to charge an officer with killing her.

He also pushed back against the existence of systemic racism in police departments and rejected the idea that law enforcement officers have a bias against minorities.

“We don’t have to choose between supporting law enforcement, proving public safety and supporting our African American neighbors,” Pence said.

The candidates also clashed on taxes — or specifically, Trump’s refusal to release his tax returns four years after repeatedly promising to do so.

“It’d be really good to know who the president owes money to,” Harris said. “The one thing we know about Joe, he puts it all out there. He is honest, he is forthright.”

Pence defended Trump as a job creator who has paid more than his fair share of taxes and shifted toward Biden: “On Day One, Joe Biden’s going to raise your taxes.”

Pence refused to say whether climate change was an existential threat or whether Trump would accept the election results should he lose, while Harris declined to say whether Biden would push to expand the number of justices on the Supreme Court.