WORLD Us vs. them: Trump aiming to use impeachment to rev up base

Us vs. them: Trump aiming to use impeachment to rev up base 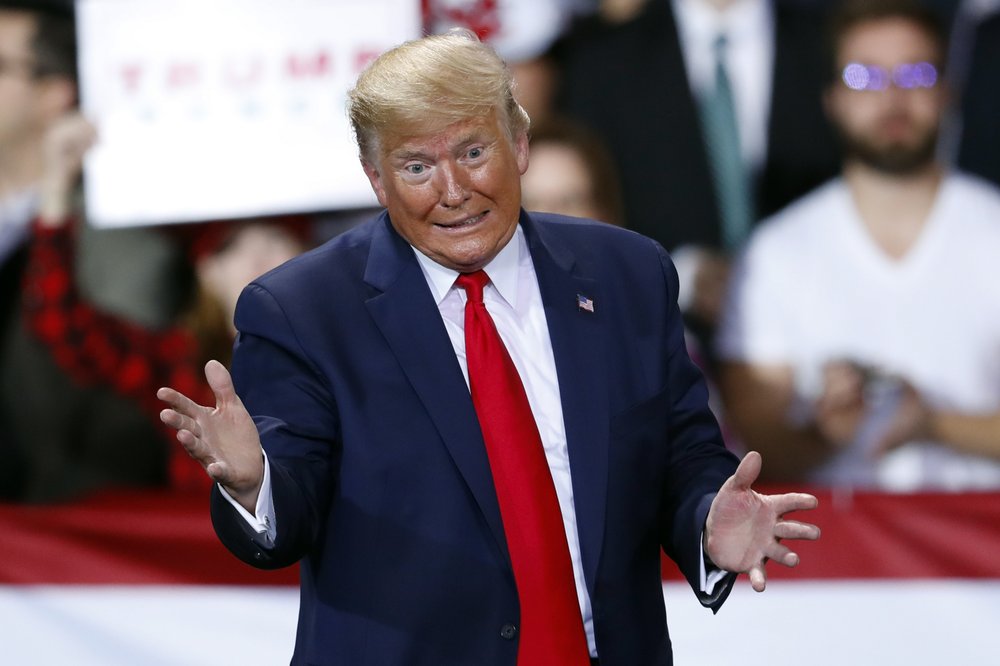 US President Donald Trump speaks at a campaign rally in Battle Creek, Michigan on December 18, 2019.  Using stark “Us versus Them” language, Trump and his campaign are trying to frame impeachment not as judgment on his conduct but as a culture war referendum on him and his supporters, aiming to motivate his base heading into an election year (Photo: AP)

Using stark “us vs. them” language, President Donald Trump and his reelection campaign have begun framing his impeachment not as a judgment on his conduct but as a referendum on how Democrats regard him and his supporters.

Mere days from the start of an election year, the White House and its allies are painting Trump’s impeachment on charges of abuse of power and obstruction of Congress as an effort to undo his 2016 victory and discount the will of the people.

There was nothing subtle about Trump’s pinned tweet shortly after impeachment: “In reality, they’re not after me. They’re after you,” was plastered above a photo of Trump pointing at the reader. “I’m just in the way.”

All but certain to be acquitted in next year’s trial by the Republican-controlled Senate, Trump has considered a barnstorming tour after the yet-to-be-scheduled trial ends, hoping to use a backward-looking message to propel him forward in 2020. His campaign believes that anger at impeachment may be the motivation needed to bring out voters who stayed home in the 2016 election but approve of the president and are fed up with the Washington establishment.

“After three years of sinister witch hunts, hoaxes, scams,” Trump roared during an impeachment-night rally in Michigan, “the House Democrats are trying to nullify the ballots of tens of millions of patriotic Americans.”

The president’s words evoked his 2016 campaign’s closing message that his Democratic rival, Hillary Clinton, had mocked the “deplorables” who supported him. In 2020, he’s ready to lean in once again on culture war divisions to portray his campaign as a movement under attack by the Washington status quo.

Trump’s allies in the House struck a similar chord during the impeachment debate as several Republican lawmakers hammered home the word “hate,” declaring that Democrats despised the president and his base. House Speaker Nancy Pelosi, D-Calif., had gone out of her way days earlie r to say she does not “hate” Trump.

As lawmakers and Trump fled Washington for a holiday break, the timing and details of the Senate trial remained in doubt. Pelosi said she was delaying transmitting the two articles of impeachment to the Senate until she had more information on trial arrangements. Even with the expected Senate acquittal, Trump would be the first president to run for reelection after impeachment.

White House officials believe a lengthy trial delay would reinforce how, in their view, Pelosi has manipulated the process to deny Trump the opportunity to defend himself and clear his name. The hope is that could drive outrage among his supporters that would be sustained beyond a Senate vote.

Campaign officials say they have seen jumps in fundraising, volunteers and rally attendance since the impeachment inquiry began. Aides believe impeachment could be key in turning out the 8.8 million voters the campaign has identified as backing the president in 2016 and who still support him, but who did not come out to vote during the 2018 elections.

Republicans draw parallels with the fiery 2018 confirmation hearings for Supreme Court Justice Brett Kavanaugh, which rallied the GOP base and brought in new donors. Since the impeachment proceedings began, the Republican National Committee has seen 600,000 new donors. The campaign and the RNC took in $10 million in small-dollar donations in just 48 hours during impeachment week.

“This lit up our base, lit up the people that are supporters of the president. They’re frustrated, they’re upset, and that motivates voters,” campaign manager Brad Parscale said recently. “They have ignited a flame underneath them.”

The campaign’s bullishness stood in contrast to the somber tone struck by Democrats, including those running for president, who maintain that Trump’s efforts to push Ukraine to investigate a Trump political foe are grounds for impeachment.

Democratic lawmakers say they are proceeding with efforts to impeach Trump out of constitutional duty, not for political gain, and all seven candidates on stage at the Democrats’ debate on Thursday night backed impeachment. National polls have consistently shown Trump trailing most major Democratic candidates, including former Vice President Joe Biden, Sens. Elizabeth Warren of Massachusetts and Bernie Sanders of Vermont, and Pete Buttigieg, the mayor of South Bend, Indiana.

“I have no doubt his hardcore supporters will buy his lies on this but I think the vast majority of the country will see the fog and misdirection Trump tries to put up,” said Karine Jean-Pierre, senior adviser at the liberal group MoveOn.org. “No amount of spin can cover up the fact that Trump is now only the third president to be impeached and the first ever to be impeached for seeking to undermine our elections and risk our national security.”

Trump’s advisers believe many voters who backed Trump three years ago, including those who were for Democrat Barack Obama in 2008 or 2012, supported him because they wanted a change in Washington. While Trump will be running next year as an incumbent, some Republican strategists believe he can still cast himself as an insurgent because he has been dogged by investigations that have denied him a fair chance to govern.

“The silver lining for the president with being impeached is that it gives him a continued rationale to run as the outsider who is being an attacked by the elites for trying to bring big change to Washington,” said Sam Nunberg, who advised Trump in his first campaign.

“He’ll not only, as any sitting president, be able to point to what he’s accomplished, he can say ‘I was able to do all that even though I didn’t have a real first term because I was under attack from Day One,’” Nunberg continued. “And he can say, ‘If you send me back for a second term, it’ll be our real first term.’”