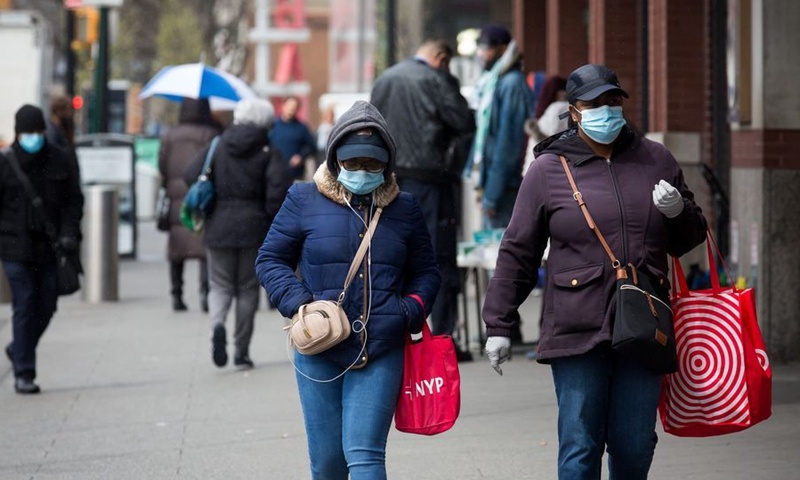 Pedestrians wearing face masks are seen in a street in the Brooklyn borough of New York, the United States, on April 3, 2020. (Photo by Michael Nagle/Xinhua)

The number of initial jobless claims in the United States fell to 803,000 last week, the first decline in three weeks, the Labor Department reported on Wednesday.

In the week ending Dec. 19, the number of Americans filing for unemployment benefits decreased by 89,000 from the previous week's upwardly revised level of 892,000, according to a report released by the department's Bureau of Labor Statistics (BLS).

The decline came after the number rose for two consecutive weeks amid surging COVID-19 cases. The previous week's figure marked the highest in three months, indicating a disruption of the labor market's recovery.

In the week ending Oct. 17, the figure dipped below 800,000 for the first time since late March, and has been largely declining in the following weeks, but the trend was reversed in the weeks ending Nov. 14 and Nov. 21, and then in the weeks ending Dec. 5 and Dec. 12.

The latest jobless claims data suggest that "employment could be flat to negative" in December as Paycheck Protection Program (PPP) loans dried up and many stores and restaurants were forced to close for good, Diane Swonk and Yelena Maleyev, economists at Grant Thornton, a major accounting firm, wrote in a blog.

"Some of the surge in the first half of December reflected a catch-up in claims that were delayed over the Thanksgiving holiday," they said, noting that initial unemployment claims remain close to four times the pace a year ago.

The BLS report also showed that the number of people continuing to collect regular state unemployment benefits in the week ending Dec. 12 declined by 170,000 to 5.3 million.

However, recipients of the Pandemic Unemployment Assistance, a federal program that applies to workers who usually do not qualify for regular state unemployment benefits such as the self-employed and gig workers, rose by 26,556 to 9.27 million in the week ending Dec. 5.

Meanwhile, recipients of the Pandemic Emergency Unemployment Compensation, which provides an additional 13 weeks of benefits for those who exhaust regular state benefits, dropped by 8,178 to reach 4.79 million in the week ending Dec. 5.

The total number of people claiming benefits in all programs -- state and federal combined -- for the week ending Dec. 5 decreased by 283,170 but remained elevated at 20.36 million, signaling a stalled recovery in the labor market.

Following months of deadlock over the size and scope of the new round of relief package, Democratic and Republican lawmakers finally reached a deal on Sunday.

The House of Representatives and Senate both approved the relief package late Monday, along with 1.4 trillion dollars in government funding for the rest of the fiscal year, which ends on Sept. 30, 2021, sending the giant spending bill to the president to sign into law.

However, President Donald Trump on Tuesday lashed out at lawmakers over the newly approved 900-billion-U.S.-dollar COVID-19 relief package, threatening not to sign the bill if changes are not made to increase the amount of stimulus checks.

The relief plan includes another round of direct payments for individuals, federal unemployment benefits -- both at reduced levels -- and more funding for PPP to support small businesses. It also features more funding for schools, testing and the distribution of vaccines.

The new aid bill will allow people 300 dollars per week in supplements to both regular and special pandemic unemployment benefits through at least March 14, which is half the 600 dollars per week approved in the CARES Act in late March, Swonk and Maleyev noted.

Ryan Sweet, senior director at Moody's Analytics, wrote in an analysis earlier this week that an extension of extra unemployment insurance benefits with 300 dollars per week is the "key component" of the agreement.

"This is especially significant now, as unemployment is still high and likely to go higher during the coming months," Sweet said, adding that the latest stimulus will likely help to avoid a double-dip recession.

Adam Posen, president of Washington-based think tank Peterson Institute for International Economics, recently told Xinhua via email that the relief package supports individuals and some businesses, and was worth passing because "we can relieve human suffering at zero interest rate cost," while noting that it "has little to do with the recovery."

"The recovery would come in the spring with the vaccine and the policy already underway, so long as there isn't a new public health disaster, whether or not this package passed," Posen said.