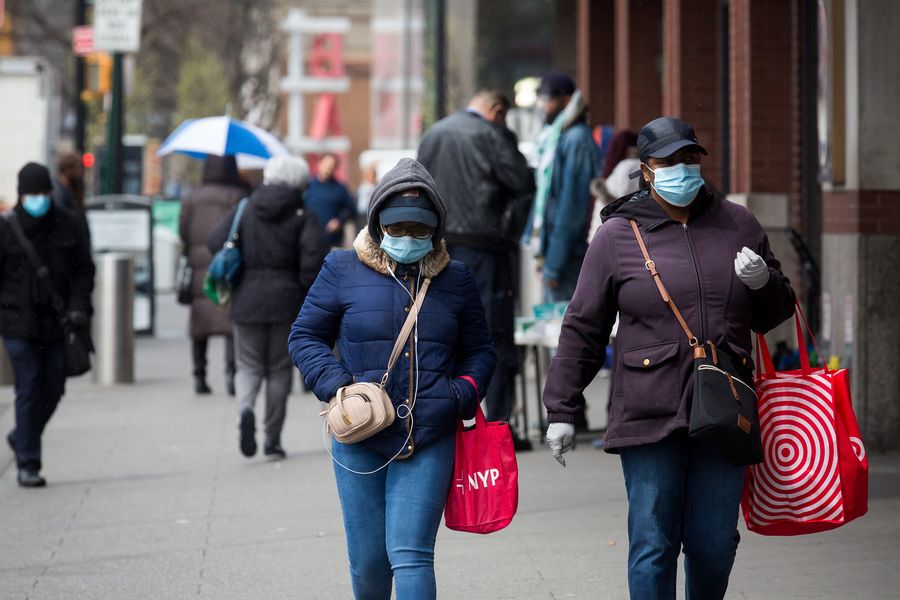 Pedestrians wearing face masks are seen in a street in the Brooklyn borough of New York, the United States, on April 3, 2020. (Photo by Michael Nagle/Xinhua)

In the week ending Feb. 27, the number of Americans filing for unemployment benefits increased by 9,000 from the previous week's upwardly revised level of 736,000, according to a report released by the department's Bureau of Labor Statistics.

"Initial claims for unemployment rose to 745K last week, but the gain reflects some catch-up in filings after mid-month storms," Sarah House, senior economist at Wells Fargo Securities, wrote in an analysis.

"After going nowhere the first six weeks of the year, the trend in claims is heading lower," House said, adding that claims along with other data suggest tomorrow's payrolls report will show a "pickup" in job growth.

The latest claims report showed that the number of people continuing to collect regular state unemployment benefits in the week ending Feb. 20 decreased by 124,000 to below 4.3 million.

Meanwhile, the total number of people claiming benefits in all programs -- state and federal combined -- for the week ending Feb. 13 decreased by 1 million to 18 million, as the country continues to grapple with the fallout of surging COVID-19 infections.

The claims report came one day ahead of the monthly employment report. According to earlier data from the Labor Department, U.S. employers added just 49,000 jobs in January, after slashing downwardly revised 227,000 jobs in December.