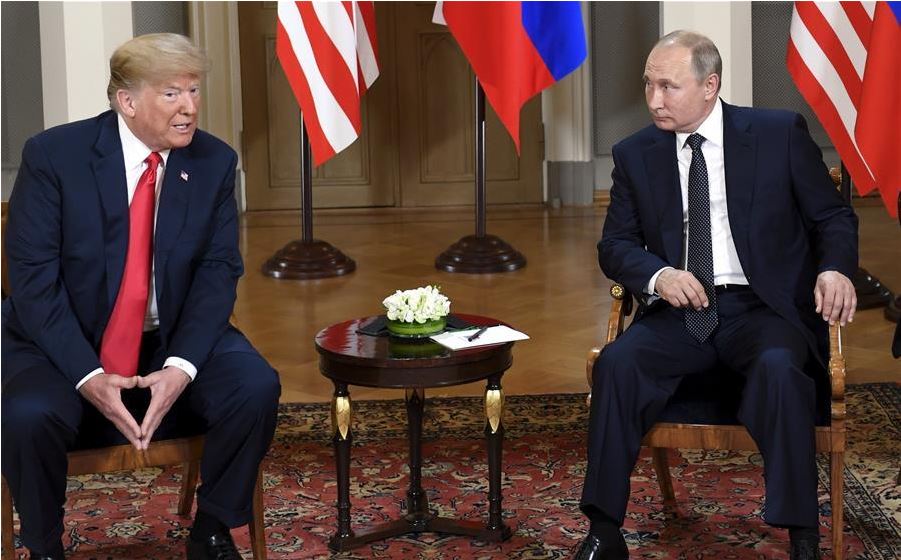 BERLIN, Nov. 1 (Xinhua) -- The US decision to withdraw from the Intermediate-Range Nuclear Forces (INF) Treaty has triggered worries that it may cause a new round of arms race between Washington and Moscow.

European countries, situated between the Atlantic and Russia, have the most vested interests in the treaty, the most significant achievement of arms control in the Cold War era.

Experts believe that the possible invalidation of the treaty will be a big blow to the United States' European allies, as well as the already poisoned transatlantic relations.

After US President Donald Trump confirmed last month that the United States will terminate the INF Treaty and pull out of it, shocked European officials responded quickly.

The German government issued a statement saying that it will do its utmost to preserve the treaty. German Foreign Minister Heiko Maas told media that as the treaty concerns the vital interests of Europe, Germany will fight for it with all diplomatic approaches, including influencing Russia and putting the issue on top of NATO's agenda.

The signing of the INF Treaty and the withdrawal of the mid-range missiles from Germany were among the greatest achievements of disarmament policy and are important for the European security architecture, said Maas.

The 1987 agreement between the United States and the Soviet Union prohibited the construction and possession of land-based, nuclear-armed missiles or cruise missiles with a range of 500 to 5,500 km.

Having kept nuclear missiles out of Europe for three decades, the INF Treaty is facing challenges in recent years, as the United States and Russia accuse each other of violating the agreement.

France, another major country in the European Union (EU) and a member of the nuclear club, responded with a warning by its Foreign Ministry that "hasty" and "unilateral" decision on the INF Treaty would be "regrettable."

French President Emmanuel Macron told Trump about the importance of the treaty especially in regard to European security.

European Commission Spokeswoman Maja Kocijancic said the treaty, one of the cornerstones of the European security structure, contributed to the end of the Cold War and the nuclear arms race. She urged the United States and Russia to remain engaged in dialogue.

Situated between the United States and Russia and serving as a buffer zone for the two superpowers in the Cold War, European countries were the major beneficiaries of the INF Treaty and will bear the brunt of the consequences of US withdrawal.

Christian Moelling, deputy director of the research institute of Berlin-based German Council on Foreign Relations, said in a recent article that the withdrawal will accelerate the dismantling of German and European security order. Without the treaty, Europe would soon be threatened by Russian nuclear weapons without restriction.

The weapon systems prohibited by the INF Treaty have a short flying time of a few minutes to the rival's targets in Europe, which increases the risk of a nuclear war, Moelling wrote.

The INF Treaty removed medium and short-range missiles deployed in Europe during the heyday of the Cold War, including cruise missiles from Britain, and US-made Pershing missiles from Germany, and Soviet's SS-20 missiles from East Europe.

Kate Hudson, general secretary of the Campaign for Nuclear Disarmament, said the withdrawal from the treaty will open the way for the return of cruise-type missiles to Europe and an increased risk of a nuclear war on the European continent.

Oliver Meier, an expert with Berlin-based German Institute for International and Security Affairs, estimated the invalidation of the treaty will trigger an arms race in Europe.

"We are not prepared for a new arms race," said Maas, German foreign minister.

ANOTHER BLOW TO TRANSATLANTIC TIES

Experts believe that the US self-determined withdrawal from the INF Treaty has made the transatlantic relations worse.

"They (Europeans) are particularly affected by the end of the treaty, but they were only informed by Washington, not consulted," said Meier.

The United States made the decision without consulting European countries, the US allies in NATO and the parties with the most vital interests in this issue.

"If Trump is thinking to deploy missiles in Europe, this initiative will cause big problems with NATO while, on the other hand, if the US gives a free hand to Russia to develop mid-range missiles because the treaty is over, Europe, like in the 1980s, could face serious challenges," said Stefano Silvestri, former Italian undersecretary of state for defense.

"In both cases, this decision will put transatlantic relations in serious danger," said Silvestri.

After Trump's meeting with Russian President Vladimir Putin in July, the United States made their Europeans allies feel uneasy as they were overlooked again.

The transatlantic relations, one of the pillars of the EU's foreign policy besides European integration, have been plunged into a difficult situation amid increasing distrust in recent years.

The United States keeps accusing EU countries, especially Germany, of creating a huge US trade deficit. Trump also complained that Europe does not assume its share of defense responsibility and has compelled European NATO allies to sharply increase defense budgets.

The challenged transatlantic relations have made German Chancellor Angela Merkel, a sharp critic of Trump, call for grasping Europe's destiny in its own hands, and Maas mull building a multilateral alliance.

"An American withdrawal from the transatlantic security policy would destabilize Europe," said Moelling, adding that the withdrawal will also cause division within EU countries, a scenario that the bloc does not want to see.