January 1, 2019 marks the 40th anniversary of the establishment of China-US diplomatic relations. USA Today published an Op-ed written by Ambassador Cui Tiankai, reviewing the 40-year experience of China-US ties and looking forward to the future development between the two countries. 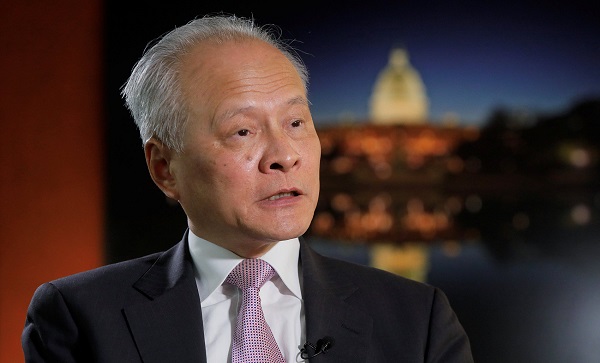 Here is the full text:

Over 230 years ago, a US ship called the "Empress of China" sailed to China, bringing back a large number of goods such as porcelain to the United States, some of which can today be found at George Washington's Mount Vernon residence. Since that early opening, trade and exchanges between our two countries have continued to flourish, transforming the world in the process.

Daily trade between our nations is worth more than $1.5 billion, and the average American household saves $850 on these goods annually. The US Department of Commerce reported that US exports to China alone supported over 910,000 American jobs in 2015. Benefits extend beyond commerce, with more than 10,000 people flying between the two countries every day for work, study and leisure, in pursuit of a better life for their families and themselves.

For 40 years, we have not only achieved a mutually-beneficial balance, which allows both of our societies to "win" together, we have also created favorable conditions for world peace and development. Our cooperation has ranged from the Cold War to fighting terrorism side by side, to addressing the global financial crisis, to working together on counter-narcotics, including putting fentanyl under control. We have also made great strides in coordinating efforts on regional hotspot issues, as well as addressing global challenges, through collaboration in international forums including APEC, the G-20, and the United Nations.

The steady growth of China-US relations is indispensable to the success of our two countries and the world, as air and water to lives. It would be irresponsible and detrimental for us to "decouple" or become isolated from each other.

The world has changed tremendously since we established relations 40 years ago. Both of our countries are experiencing unprecedented economic, social, technological, and military progress. Therefore, it comes as no surprise that we will have disagreements from time to time, many of which cannot be resolved overnight.

Although the disagreements are inevitable, they are still manageable because the basic elements of the relationship remain unchanged. These include the shared interests of our peoples for a better life, and the need for our combined efforts to address major global challenges. Besides, we have far greater common interests than differences and disagreements. In such an environment, cooperation is the only right choice.

Meanwhile, the political foundation of our relationship must remain unchanged. Our two sides need to respect each other's core interests and major concerns, abide by the China-US Joint Communiqué on the Establishment of Diplomatic Relations and two other joint communiqués, and remain firmly committed to the "one China" principle.

As President Xi Jinping has said, the aspirations of the people to live a better life must always be the focus of our efforts. Similarly, President Abraham Lincoln famously said: "A government of the people, by the people, and for the people shall not perish from the earth." We must continue to serve the fundamental and common interests of the two peoples as we develop future-oriented China-US relations.

In this new international context, the China-US relationship has once again come to a crossroads in history. Our relations should continue to be defined by our two peoples, who are looking to us with high expectations as we look forward to the next 40 years. Their aspirations are to benefit more from our relations. These shared interests will rise above "political correctness" and the "differences" between our two countries.

China and the United States benefit the most from our cooperation. We should avoid the entrapments of rivalry, which only holds both of us back. With the guidance of our presidents, we must seize the hour, seize the day, advancing China-US relations centered on coordination, cooperation and stability. We must strengthen communication and mutual trust, focus on cooperation, carefully mediate our differences, and address economic and trade frictions through negotiations.

The China-US relationship is like a tower built on the solid foundation of common interests. And this foundation has remained as strong as ever, weathering every storm of the past 40 years. Damaging or dismantling it will only cause mutual suffering. Thus, it is our common historical responsibility to pass a steady China-US relationship full of opportunities on to our future generations. 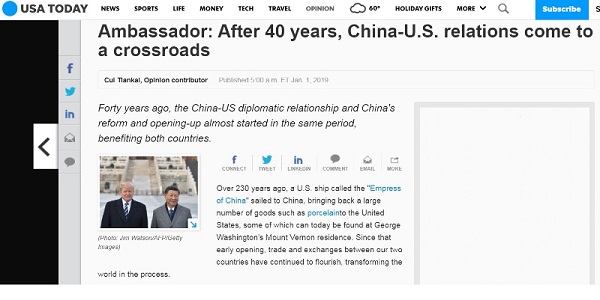 Screenshot of the article (Photo: china-embassy.org)