The new president of the University of Southern California said she wants to be a part of "fixing" the school following a series of high-profile scandals including the massive college admissions bribery case that broke last week. 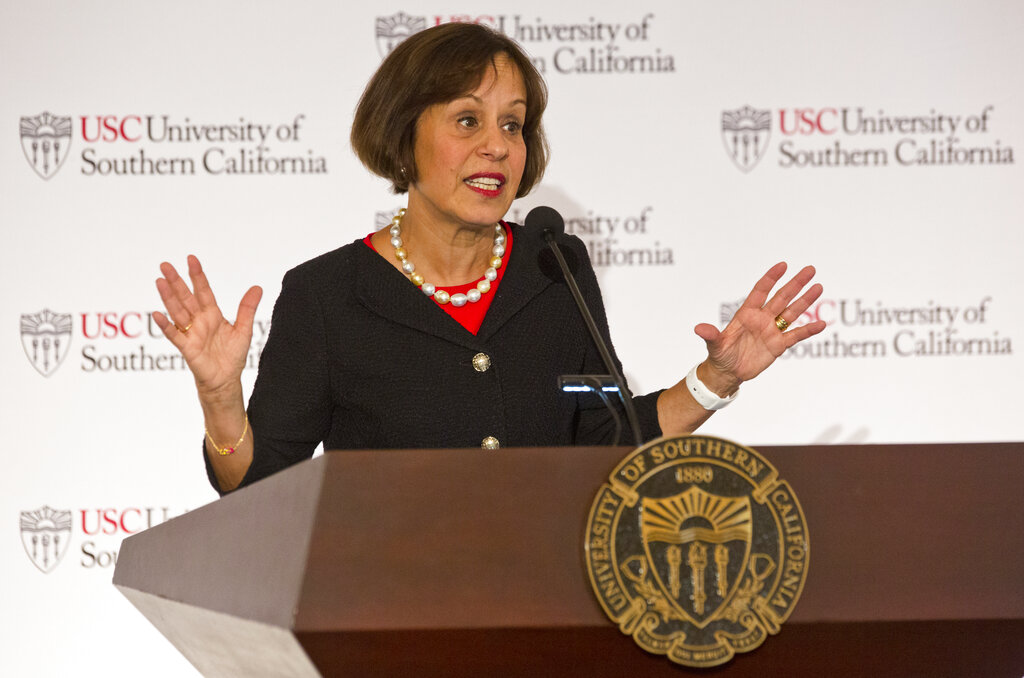 Carol Folt, a biologist and former chancellor of the University of North Carolina at Chapel Hill, will become USC's 12th president and the first permanent female president in school history, the board of trustees announced Wednesday. Her first day on the job will be July 1.

Folt said she was horrified to learn of the bribery scheme, which involved wealthy parents paying to have a college counselor rig standardized tests or get their children admitted as recruits of sports they didn't play. But it didn't give her pause about taking on the position.

"I want to be a part of fixing this," Folt said. "If you're trying to run an institution, you have to enjoy the fixing as well as the advancing."

She'll have her work cut out for her, said Roger Sloboda, a biology professor at Dartmouth College in New Hampshire, where Folt started her academic career and spent three decades.

"She is a scientist and she'll look at the data, figure out what happened and how to fix it," he said.

A lengthy search for a new president led a 23-member committee to unanimously recommend Folt, said Rick Caruso, chairman of the USC board of trustees

"If nothing else, this last nine months has shown us that this university can handle whatever's thrown at us," he said. "We are ready to move forward."

Folt will take over USC from interim President Wanda Austin, who stepped in after former President C.L. Max Nikias resigned last summer amid two major controversies: reports that the school ignored complaints of widespread sexual misconduct by a longtime campus gynecologist and an investigation into a medical school dean accused of smoking methamphetamine with a woman who overdosed.

At UNC, Folt inherited a department that offered irregular courses with significant athlete enrollments dating back years before her arrival. The courses were misidentified as lecture classes that didn't meet, required a research paper or two for typically high grades with little to no faculty oversight.

Folt was forced out early from the job in January amid a controversy over a Confederate statue known as "Silent Sam" that was torn down on campus.

Four USC students showed up to Folt's introduction at USC protesting her actions during the Confederate statue controversy, saying she took credit for taking it down when it really was a student-led movement.

One of the students, Rebecca Hu, said she wanted to make her concerns known and felt students should have been more heavily involved in the selection of a new president.

"I think the student community is really hurt by everyone in USC administration, and we just want to make sure they actually hear us for once and take us seriously," said Hu, a senior majoring in philosophy.

Graduate student Myla Bastien called for transparency and honesty. "I think that if USC just owns it, and then comes up with a plan to prevent it from happening in the future, that would be helpful," she said.