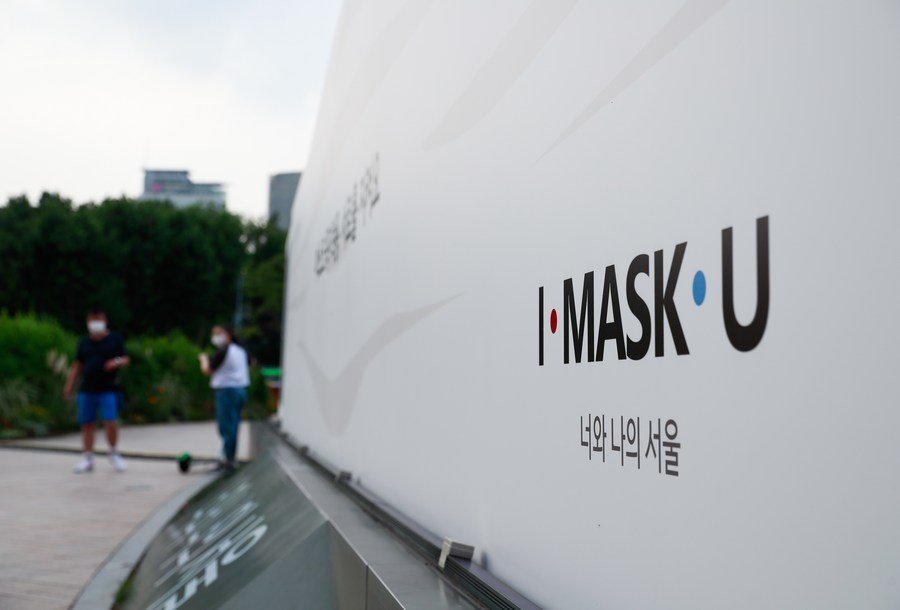 Photo taken on Sept. 15, 2020 shows the city slogan of Seoul changed from I·SEOUL·U to I·MASK·U near the city hall of Seoul, South Korea. (Xinhua/Wang Jingqiang)

"These recent activities on United States Army Garrison Humphreys and Osan Air Base do not reflect USFK's commitment to mitigating the spread of COVID-19," the statement noted.

The USFK has been under criticism over the dance party held last week at the U.S. bases, in which participants did not wear masks. Both the U.S. Army Garrison Humphreys and the Osan Air Base are located in Pyeongtaek, 70 km south of Seoul.

The South Korean government tightened its social-distancing rules to the third-highest level last week, before lifting it further to the second-highest this week amid the spike in the COVID-19 cases.

In the latest tally, South Korea reported 686 more confirmed cases of COVID-19 for the past 24 hours, raising the total number of infections to 39,432. The daily caseload hovered between 400 and 700 in the past two weeks, growing in triple digits for 32 days since Nov. 8.

The combined number of infections among the USFK-affiliated personnel stood at 408 as of Monday.

"USFK has closed both facilities involved in the recent incidents until further notice and will continue to implement mitigation measures to ensure our installations remain consistent with our core tenets and Republic of Korea (ROK) government social distancing measures," the USFK said.