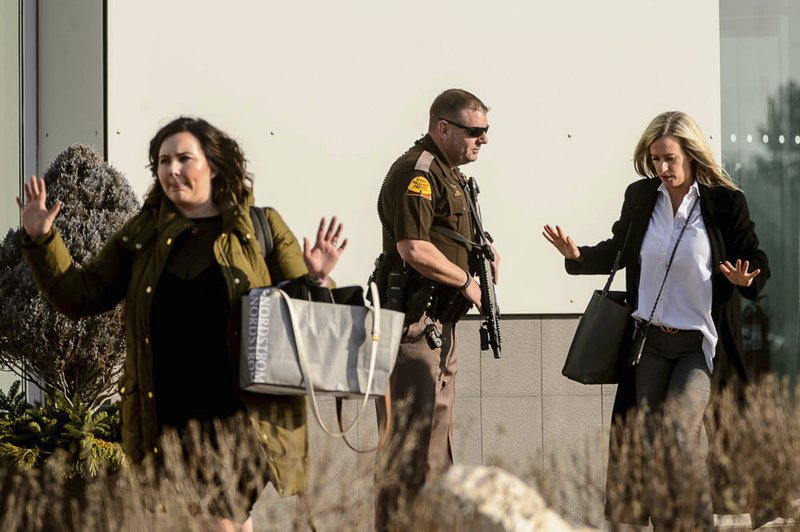 A shooting at a suburban Salt Lake City mall that sent hundreds of panicked shoppers fleeing started as an argument between rival gang members inside the mall and later erupted in gunfire outside, leaving two people wounded, police said Monday.

Two 19-year-old men were arrested on suspicion of aggravated murder, but investigators are not yet sure if either of them fired the shots that hit the victims, who were also involved in the brawl, said Kenny Bass, a police spokesman in the Salt Lake City suburb of Murray.

Shots were fired by the both sides, and those injured were believed to be people with the gangs. No bystanders were hit or injured, Bass said.

Compounding the pandemonium, a fire alarm at the Fashion Place mall that had been malfunctioning for days went off inside the mall, sending people running for exits, Bass said.

Shoppers reported hearing the alarm after the shooting started about 1:30 p.m. and evacuation orders over a loudspeaker, while employees said they hunkered down in stockrooms and waited.

Investigators are still looking for others else involved in the dispute and trying to locate more witnesses, Bass said.

The members of the rival gangs crossed paths by chance in the mall and their argument turned physical after it went outside, Bass said.

One of the two victims, a woman in her early 20s, was treated and released hours after the shooting broke out, Bass said.

A man, also in his early 20s, remained hospitalized Monday in critical condition.

The suspects were identified as Jesus J. Payan-Mendoza and Jorge C. Gonzalez. No attorney was listed in court records for either man.

Fashion Place is a popular shopping center in the heart of the Salt Lake City metro area. It was open Monday.

A 2007 shooting at a different Salt Lake City mall killed five people and wounded four others. The 18-year-old gunman was killed in a shootout with police.