BRATISLAVA, Nov. 24 (Xinhua) -- The prime ministers of the Visegrad Four (V4) countries (Slovakia, the Czech Republic, Hungary and Poland) met in the Slovak city of Kosice Thursday to discuss diverse issues including the Russia-Ukraine conflict, energy crisis and illegal migration. 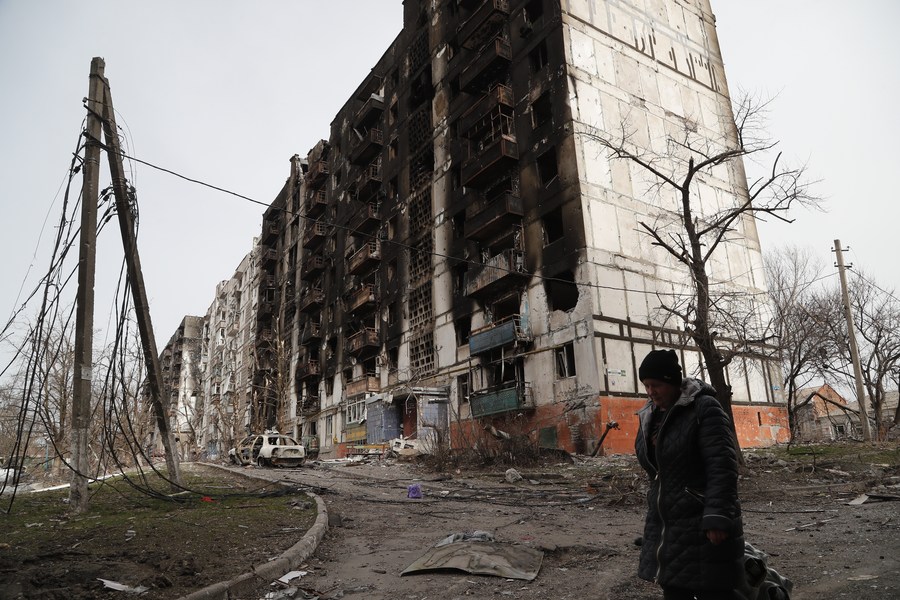 A woman walks past a damaged building in Mariupol, April 1, 2022. (Photo: Xinhua)

The summit was attended by Eduard Heger of Slovakia, Petr Fiala of the Czech Republic, Hungary's Viktor Orban and Poland's Mateusz Morawiecki.

Morawiecki was quoted by TASR (the News Agency of the Slovak Republic) as saying that the proposed capping of the Russian gas price had been set too high.

"It's not just the people of Ukraine who pay excessive prices for gas, it's all Europeans as well. We urge the European Commission to use the tools at its disposal without delay," he said.

It was also reported that Orban declared after the summit that Hungary supports Finland and Sweden's accession to NATO.

Fiala said the four prime ministers reached consensus on the need to continue financial aids for Kiev. "Where the opinions differ, however, is how to carry this out in practice," he added.

The four heads of government also agreed to help Hungary solve the issue of illegal migration.

"We've not just declared verbal help to Hungary but also concrete support, either physical -- in the form of sending additional police officers -- or with additional financial contributions," TASR quoted Heger as saying at a joint press conference.