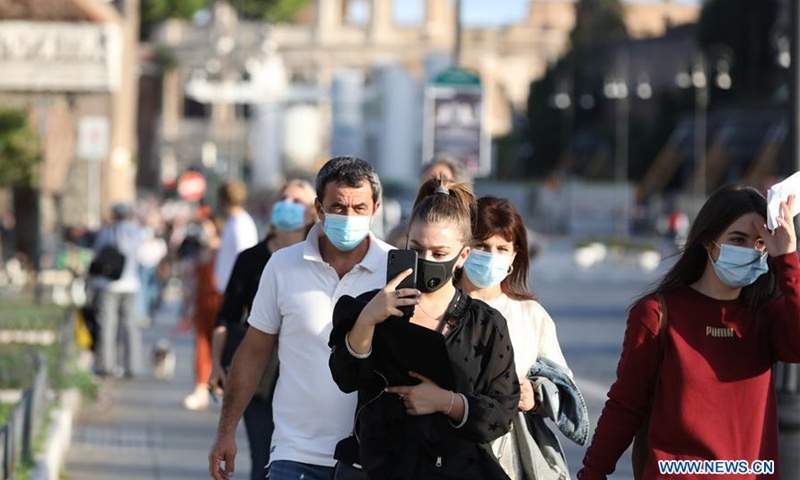 People wearing face masks walk on Via dei Fori Imperiali in Rome, Italy, Oct 6, 2020. Five southern regions of Italy have introduced mandatory mask laws, even for people in open spaces. And the government has announced that the national state of emergency, first put into place on Jan. 31, would be extended "at least" until its one-year anniversary. (Photo:Xinhua)

Europe's failure to balance the need to restart the economy and protect the public health as well as the public's decreasing vigilance against the virus may have contributed to a serious second wave of the COVID-19 in the continent, Chinese nationals and health experts said on Friday.

The 27 countries of the European Union and the UK have now surpassed the US in terms of new cases per million for the first time since spring. In Italy, the number of new confirmed cases in a single day has been hitting record highs in recent days, and the number of deaths in the past week has increased by nearly 40 percent.

The Chinese Embassy in Italy on Friday urged Chinese nationals to remain vigilant against what it calls a more serious second wave of COVID-19 in the country, as nearly 100 Chinese nationals have been infected with the coronavirus so far in several clusters.

Among those already infected, some are severely ill, the embassy said in an alert notice, saying the Chinese community has been impacted by the second wave of the epidemic far worse than the first one. The embassy added that there have been some clusters of infections in Chinese communities, which are believed to be related to gatherings brought about by the resumption of work and production.

The cluster infection in the Chinese community mainly happened in Prato, where many factories are run by Chinese. Some Chinese parents in Prato have decided not to send their children to school to avoid infection, and employees have returned to working from home, Blanche Wang, a 33-year-old Chinese living in Milan, told the Global Times on Friday.

Some Chinese in Italy reached by the Global Times have been seeking ways to return to China, while others like Wang plan to stay in Italy due to the risk of being infected on a plane.

People's decreasing vigilance against the virus, the large-scale cross-border traveling during the summer vacation, as well as the lax epidemic control measures may have led the second wave to hit Europe rapidly and hard, some Chinese residents living Italy told the Global Times.

"In August, when Europe was in a holiday season, a large number of tourists from the UK and Germany visited Italy. The beaches were more crowded than ever, and people were not protecting themselves well," Wang said.

This was echoed by Chen Ming in Turin, co-founder and head of the China-Italy Youth Association (ANGI), who told the Global Times that young people are the most negligent.

The large-scale protests in some European countries have also created a breeding ground for the coronavirus, Wang said. "People in some countries are not taking the pandemic as seriously as Chinese."

Wang thinks that epidemic control measures in some European countries are far too loose.

In Italy, quarantine of asymptomatic cases are mostly carried out at home, instead of in a designated place as China does, and patients are released once the quarantine period is over even if they still tested positive for the virus.

Yang Zhanqiu, deputy director of the pathogen biology department at Wuhan University, told the Global Times that the pandemic in Europe has never been fully controlled. With winter approaching, Europe is likely to witness a fresh wave of coronavirus.

Yang also pointed out that the rather loose control measures in European countries for the sake of economic recovery also worsened the pandemic situation.

He predicted that the new wave in winter may not be stronger than the pandemic in spring, as local people have developed immunities, but still could result in severe situations in some parts of the continent.