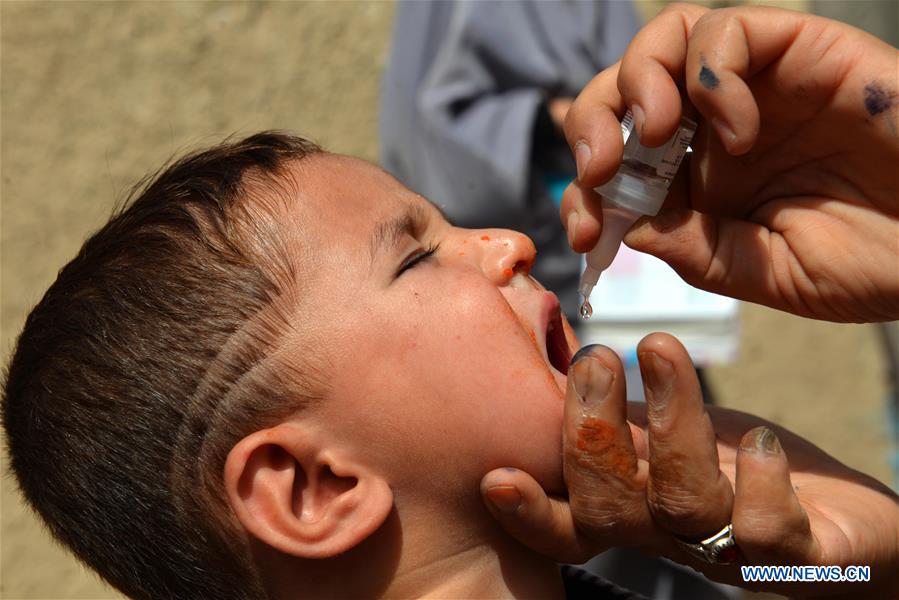 A health worker gives a polio vaccine to a child during a vaccination campaign in Kandahar city, Afghanistan, August. 7, 2018. (Photo: Xinhua)

Afghanistan (Xinhua) -- The Afghan Public Health Ministry, with the support of World Health Organization (WHO) and the United Nations Children's Fund (UNICEF), launched a nationwide five-day campaign on Monday to give immunity vaccination dose to 9.9 million children under the age of five, the ministry said in a statement.

During the nationwide campaign vitamin A capsules will also be given to over 8.9 million children aged between six months to five years.

"Vitamin A helps to build a child's immunity and reduces the risk of diarrhea, respiratory infections and measles. Vitamin A supplements can improve a child's chance of survival by 12 to 24 percent," the statement read.

The drive was launched as a fresh polio case was detected in Afghanistan in late June, bringing to nine the number of confirmed cases of polio virus since January this year.

The ongoing insurgency and conflicts have been hindering the efforts to stamp out the infectious disease in the mountainous country as 1.2 million children from areas inaccessible to vaccination teams will miss the ongoing vaccine drive.

These children will not be protected from the polio virus and the main provinces affected are Kandahar 117,640 children, Helmand 541, 839 children, Uruzgan 119,406 children and Zabul 146,513 children.

The polio program continues to look for ways to reach these children to protect them from permanent paralysis due to polio, the statement noted.