NEW YORK, Sept. 15 (Xinhua) -- The federal government of the United States is commanding a strong gear for its COVID-19 vaccination efforts with new vaccine approval planned and extra pressure exerted on the country's top businesses and incoming immigrants, as the pandemic has killed roughly one in every 500 Americans. 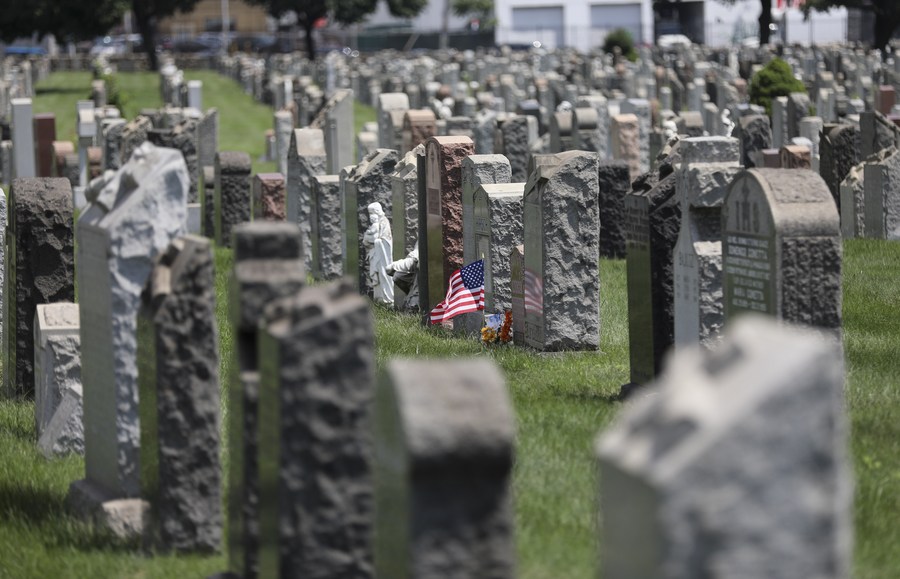 A U.S. national flag and flowers are seen at a cemetery in New York, the United States, July 29, 2020. (Xinhua/Wang Ying)

U.S. President Joe Biden is expected to meet on Wednesday with executives from companies including Walt Disney Co., Microsoft Corp. and Walgreens Boots Alliance Inc. to advance his COVID-19 vaccination requirements for the private sector.

The White House meeting comes after a plan Biden announced last week designed to bring the pandemic under control, which includes vaccine requirements affecting roughly 100 million workers. Attendees are expected to discuss how they are expanding requirements at their companies and institutions and how mandates have driven up vaccinations among employees.

According to Johns Hopkins University data, as of Tuesday night, 663,913 people in the United States have died of COVID-19. Per the U.S. Census Bureau, the country's population as of April 2020 was 331.4 million.

This meant that roughly "one in 500 Americans have died from coronavirus since the nation's first reported infection," "another grim milestone in its fight against the devastating COVID-19 pandemic," reported CNN on Wednesday.

Fifty four percent of U.S. adults said the worst of the outbreak is still to come, despite widespread vaccination efforts, according to a Pew Research Center report based on a survey of 10,348 U.S. adults conducted from Aug. 23 to 29, which was released on Wednesday.

Pfizer and BioNTech plan to file for Food and Drug Administration (FDA) emergency authorization in November for their COVID-19 vaccine for children younger than 5, Pfizer Chief Financial Officer Frank D'Amelio said on Tuesday.

The company expects to have data for the 5 to 11 age group by the end of September, while data for the even younger group is expected later in October, D'Amelio added.

The FDA is under pressure to authorize a vaccine for children younger than 12, as many parents say they are anxious to get their children vaccinated as schools reopen and the highly contagious delta variant continues to spread.

Studies for the Pfizer vaccine in children ages 5 to 11 are ready for review, according to the FDA. Pediatrician Pia Fenimore in Lancaster County, Pennsylvania, said that meant the vaccine could be ready sooner than expected, possibly in mid- to late October.

"A lot of people were willing to volunteer their child for these studies, so we were able to get the numbers of children in these studies faster than we thought we would," NBC on Tuesday quoted her as saying.

The above-mentioned Pew report also found that 73 percent of those aged 18 and older say they've received at least one dose of a vaccine for COVID-19. About a quarter of adults say they have not received a vaccine.

Some of the lowest vaccination rates are seen among those with no health insurance and white evangelical Protestants (57 percent each) as well as among Republicans and Republican leaners (60 percent), per the report.

In another development, the United States will require new immigrants to be fully vaccinated against the coronavirus as part of its routine medical examination, U.S. Citizenship and Immigration Services (USCIS) announced on Tuesday.

The measure goes into effect on Oct. 1. Most people applying to become a permanent resident in the United States are required to receive the immigration medical examination "to show they are free from any conditions that would render them inadmissible under the health-related grounds," according to USCIS.

The coronavirus vaccination requirement follows updated guidance from the Centers for Disease Control and Prevention, USCIS said. Exceptions to the requirement will be allowed for medical conditions, if there is a lack of vaccine supply or if the vaccine is "not age-appropriate" for the immigration applicant, USCIS said. Religious or "moral convictions" exemptions may be requested on a case-by-case basis.