WORLD Vaccine deserts: Some countries have no COVID-19 jabs at all

Vaccine deserts: Some countries have no COVID-19 jabs at all 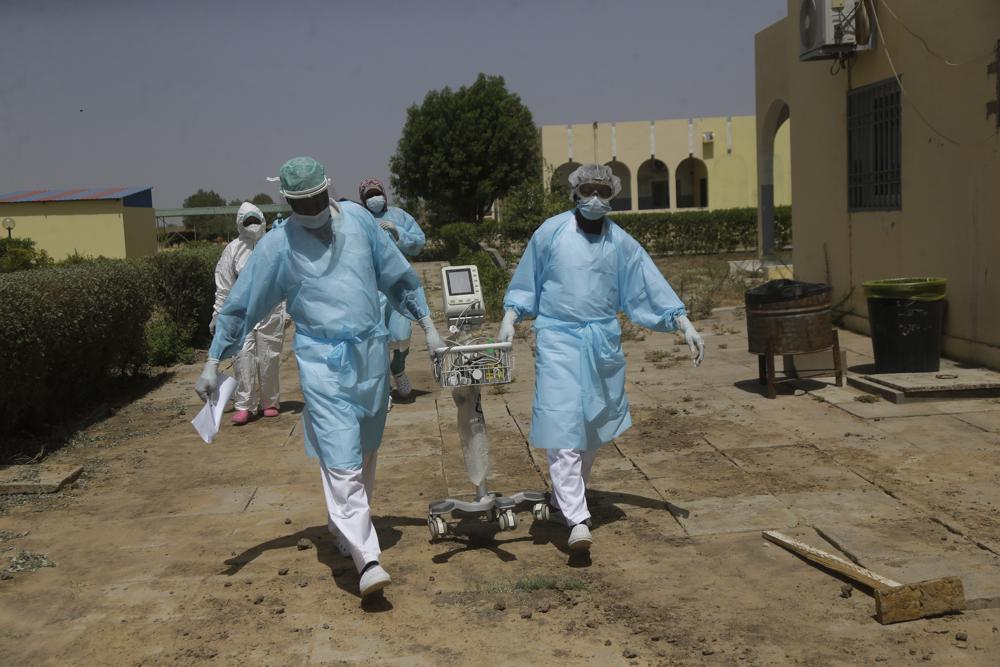 At the small hospital where Dr. Oumaima Djarma works in Chad's capital, there are no debates over which coronavirus vaccine is the best.

There are simply no vaccines at all.

Not even for the doctors and nurses like her, who care for COVID-19 patients in Chad, one of the least-developed nations in the world where about one third of the country is engulfed by the Sahara desert.

“I find it unfair and unjust, and it is something that saddens me,” the 33-year-old infectious diseases doctor says. “I don’t even have that choice. The first vaccine that comes along that has authorization, I will take it.”

While wealthier nations have stockpiled vaccines for their citizens, many poorer countries are still scrambling to secure doses. A few, like Chad, have yet to receive any.

The World Health Organization says nearly a dozen countries — many of them in Africa — are still waiting to get vaccines. Those last in line on the continent along with Chad are Burkina Faso, Burundi, Eritrea and Tanzania.

“Delays and shortages of vaccine supplies are driving African countries to slip further behind the rest of the world in the COVID-19 vaccine rollout and the continent now accounts for only 1% of the vaccines administered worldwide,” WHO warned Thursday.

And in places where there are no vaccines, there's also the chance that new and concerning variants could emerge, said Gian Gandhi, UNICEF’s COVAX coordinator for Supply Division.

“So we should all be concerned about any lack of coverage anywhere in the world,” Gandhi said, urging higher-income countries to donate doses to the nations that are still waiting.

While the total of confirmed COVID-19 cases among them is relatively low compared with the world's hot spots, health officials say that figure is likely a vast undercount: The countries in Africa still waiting for vaccines are among those least equipped to track infections because of their fragile health care systems.

Chad has confirmed only 170 deaths since the pandemic began, but efforts to stop the virus entirely here have been elusive. Although the capital's international airport was closed briefly last year, its first case came via someone who crossed one of Chad's porous land borders illegally.

Regular flights from Paris and elsewhere have resumed, heightening the chance of increasing the 4,835 already confirmed cases.

The Farcha provincial hospital in N’Djamena is a gleaming new campus in an outlying neighborhood, where camels nibble from acacia trees nearby. Doctors Without Borders has helped supply oxygen for COVID-19 patients, and the hospital has 13 ventilators. The physicians also have plenty of Chinese-made KN95 masks and hand sanitizer. Still, not a single employee has been vaccinated and none has been told when that might be possible.

That was easier to accept at the beginning of the pandemic, Djarma said, because doctors all around the world lacked vaccines. That has changed dramatically after the development of shots in the West and by China and Russia that have gone to other poor African countries.

“When I hear, for example, in some countries that they've finished with medical staff and the elderly and are now moving on to other categories, honestly, it saddens me,” Djarma said. “I ask them if they can provide us with these vaccines to at least protect the health workers.

“Everyone dies from this disease, rich or poor,” she says. “Everyone must have the opportunity, the chance to be vaccinated, especially those who are most exposed."

COVAX, the U.N.-backed program to ship COVID-19 vaccines worldwide, is aimed at helping low- and middle-income countries get access. A few of the countries, though, including Chad, have expressed concerns about receiving the AstraZeneca vaccine through COVAX for fear it might not protect as well against a variant first seen in South Africa.

Chad is expected to get some Pfizer doses next month if it can put in place the cold storage facilities needed to keep that vaccine safe in a country where temperatures soar each day to 43.5 degrees Celsius (110 degrees Fahrenheit).

Some of the last countries also took more time to meet the requirements for receiving doses, including signing indemnity waivers with manufacturers and having distribution plans in place.

Those delays, though, now mean an even longer wait for places like Burkina Faso, since a key vaccine manufacturer in India scaled back its global supply because of the catastrophic virus surge there.

"Now with global vaccine supply shortages, stemming in particular from the surge of cases in India and subsequently the Indian government’s sequestration of doses from manufacturers there, Burkina Faso risks even longer delays in receiving the doses it was slated to get,” said Donald Brooks, CEO of a U.S. aid group engaged in the COVID-19 response there known as Initiative: Eau.

Front-line health workers in Burkina Faso say they’re not sure why the government hasn’t secured vaccines.

“We would have liked to have had it like other colleagues around the world,” says Chivanot Afavi, a supervising nurse who worked on the front lines of the response until recently. “No one really knows what this disease will do to us in the future.”

In Haiti, not a single vaccine has been administered to the more than 11 million people who live in the most impoverished country of the Western hemisphere.

Haiti was slated to receive 756,000 doses of the AstraZeneca vaccine via COVAX, but government officials said they didn’t have the infrastructure needed to conserve them and worried about having to throw them away. Haitian officials also expressed concerns over potential side effects and said they preferred a single-dose vaccine.

Several small island nations in the Pacific also have yet to receive any vaccine, although the lack of outbreaks in some of those places has meant there is less urgency with inoculation campaigns. Vanuatu, with a population of 300,000, is waiting to receive its first doses of the AstraZeneca vaccine later this month, but it has recorded only three cases of coronavirus, all of them in quarantine.

At the Farcha hospital in Chad, nine health care workers have gotten the virus, including Dr. Mahamat Yaya Kichine, a cardiologist. The hospital now has set up pods of health care worker teams to minimize the risk of exposure for the entire staff.

“It took almost 14 days for me to be cured,” Kichine says. “There were a lot of caregivers that were infected, so I think that if there is a possibility to make a vaccine available, it will really ease us in our work.”