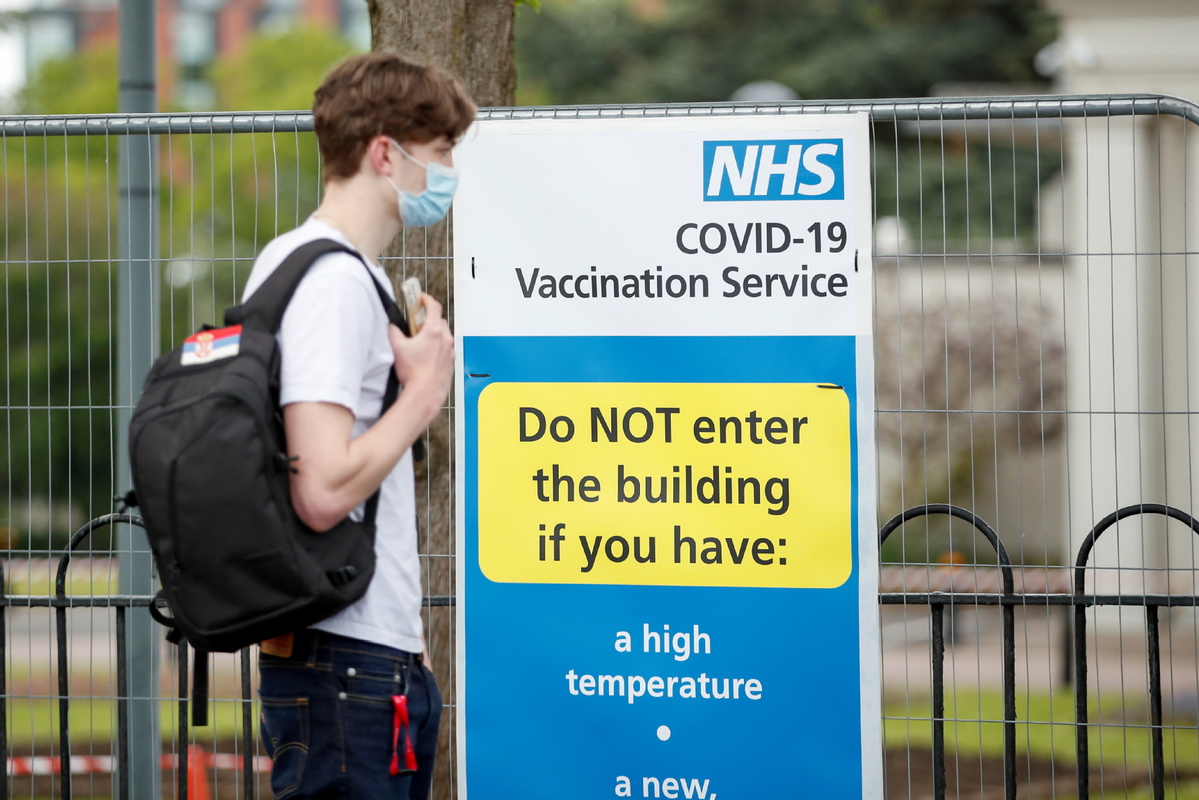 A person waits to receive the coronavirus disease (COVID-19) vaccine next to an information board, in Leicester, Britain, on May 27, 2021. [Photo/Agencies]

Experts from the University of Stirling in Scotland and the National Centre for Social Research led a survey of almost 5,000 adults in the United Kingdom to explore vaccine intentions and the implications for communications and targeted support.

The study found that vaccine hesitancy was a particular issue in nonwhite British ethnic groups, in younger adults, and among those with lower education, greater financial hardship and those who believe that they have already had the virus.

While UK acceptance has generally been high, there have been concerns about uptake among sub-populations and in other parts of the world. The research findings will help understand and inform approaches to addressing vaccine hesitancy in low-uptake groups, as vaccine programs continue to progress worldwide.

Martine Stead, deputy director of the Institute for Social Marketing at Stirling University, who also led the study, said vaccine hesitancy "is a vital issue because it can threaten comprehensive vaccination in populations.

"We considered vaccine intentions of almost 5,000 UK adults in the early stages of the vaccine rollout and explored important issues, such as the factors behind acceptance and trust in information sources. The results indicate that targeted engagement is required to address vaccine hesitancy.

"Healthcare professionals and scientific advisors should play a central role in communications, as they are regarded as the most trusted, and tailored messaging is needed for hesitant groups. Work is also needed to rebuild trust in government information."

Helen Bedford, professor of Children's Health at UCL Great Ormond Street Institute of Child Health, said that vaccination is one of the most effective public health interventions for preventing disease. "In less than a year of widespread use of COVID-19 vaccines, we have seen their impact in reducing serious disease and deaths from this recently-emerged infection. However, in order to maximize their potential, we need to understand public views about vaccines."

The survey of 4,978 adults was conducted in January and February 2021, just weeks after the vaccine rollout began in December 2020.

The study indicated participants who were educated to at least degree level were three times as likely, and those educated to A-level or equivalent were nearly twice as likely, to indicate acceptance, compared to those without qualifications.

The findings also showed that the top three trusted information sources were the National Health Service, doctors, nurses, and other healthcare professionals, and scientific and medical advisers.

Just 44 percent trusted the UK government "completely/a great deal", with the three least trusted sources reported as celebrities and social media influencers, social media, and faith or community leaders. In addition 61 percent indicated that they had very little or no trust in the media.

"Difference in trust varied by sociodemographic factors," Stead explained. Compared with White British participants, other ethnicities had lower trust in healthcare and scientific sources. Although trust in faith/community leaders was low, it was higher in Asian/Asian British and Black/Black British participants, suggesting a role for these leaders, she added.