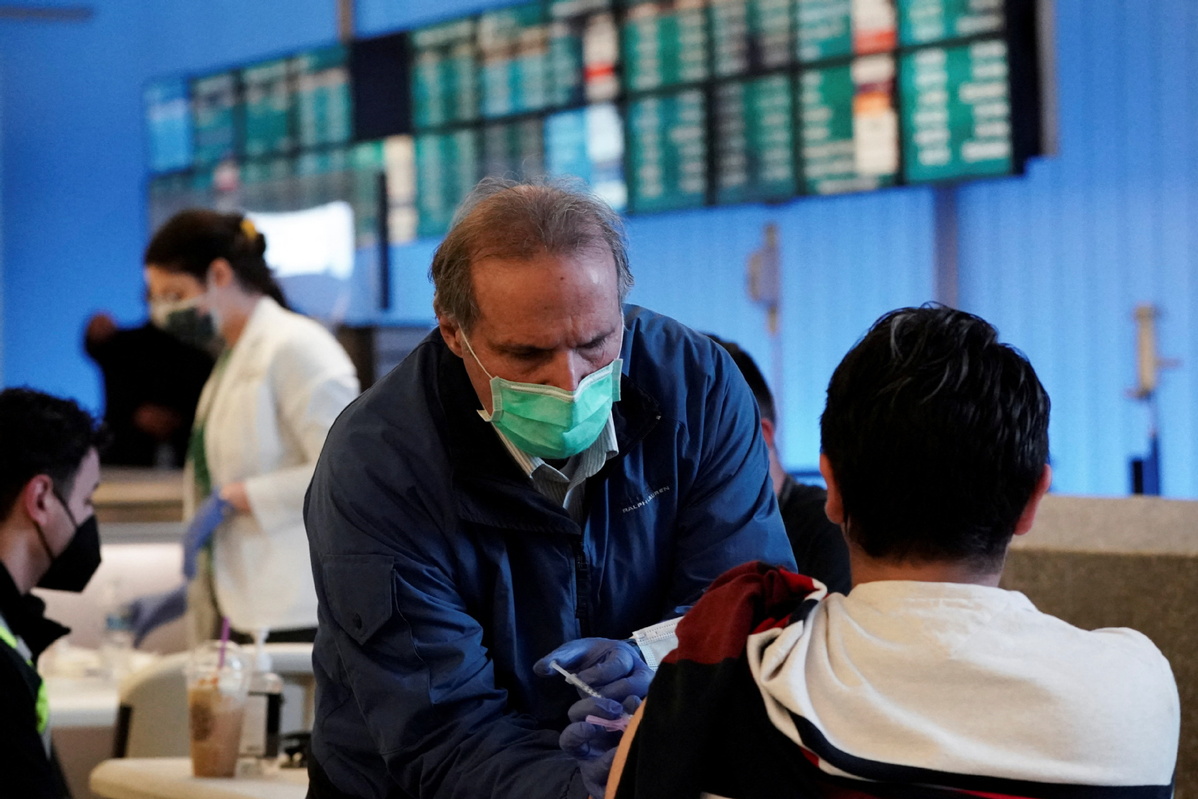 Thursday was the deadline for about 10 million US healthcare workers to get at least their first dose of a coronavirus vaccine in much of the country.

The federal vaccine mandate covers workers at 76,000 hospitals, nursing homes, home health agencies and other providers that participate in Medicaid and Medicare. Those facilities will lose funding if they don't comply, federal officials said.

Enforcement of the mandate begins in 25 states and the District of Columbia and will extend to the rest of the country in the coming weeks.

The deadline came after the Supreme Court's decision on Jan 13 that blocked a vaccine-or-testing mandate for large private employers but upheld a vaccination requirement for healthcare workers at facilities subsidized by federal funds.

The Centers for Medicare & Medicaid Services (CMS) is overseeing the mandate. It allows religious and medical exemptions.

Some in the nursing-home industry fear the mandate will worsen already serious staff shortages if employees quit rather than comply.

Mark Parkinson, the CEO of the American Health Care Association, a trade group representing more than 14,000 nursing homes across the country, said in a statement last week that the group is "concerned that repercussions of the vaccine mandate among health care workers will be devastating to an already decimated long term care workforce".

Nationwide, about 81 percent of nursing home staff members were fully vaccinated as of earlier January, according to CMS.

Moderna said Wednesday that it has started a study of a booster shot designed to target the Omicron coronavirus variant, one day after Pfizer launched a similar trial.

The company said that while a third shot of its original COVID-19 vaccine increased Omicron-fighting antibodies 20 times higher than their peak before the shot, the antibody levels declined six months after the single dose of the current booster dose was administered. However, the antibodies remained detectable in all of the booster recipients' studies, the company said.

Moderna didn't say when it expected to have results.

Pfizer CEO Albert Bourla said last month that if a new vaccine is needed for the Omicron coronavirus variant, the company will have one in March. However, a Pfizer spokesperson confirmed that the company has already begun to manufacture this vaccine.

"In the wake of Omicron, we are proactively investigating and manufacturing at risk an Omicron-based vaccine should it be needed, but we of course need to have results and discussions with health authorities as well as approvals before it would be deployed," the spokesperson told CNN.

Expected vaccine production won't be affected if the companies need to pivot to the new vaccine, the company said.

Pfizer and its partner BioNTech started a clinical trial on Tuesday to test a new version of their Omicron-specific shot.

The US Navy said it has discharged 45 service members for refusing the COVID-19 vaccine, including 23 active-duty sailors.

The announcement on Wednesday was the first time the Navy has announced that it has separated sailors for not getting inoculated against the coronavirus since the military's Nov 28 mandate had expired, according to the Navy Times.

The Navy said 95 percent of active-duty Navy personnel are fully vaccinated against COVID-19, and 99 percent have had at least one shot.

"There have been 3,258 active-duty requests for a religious accommodation from immunization for the COVID-19 vaccine," but none have been granted so far, according to the Navy.