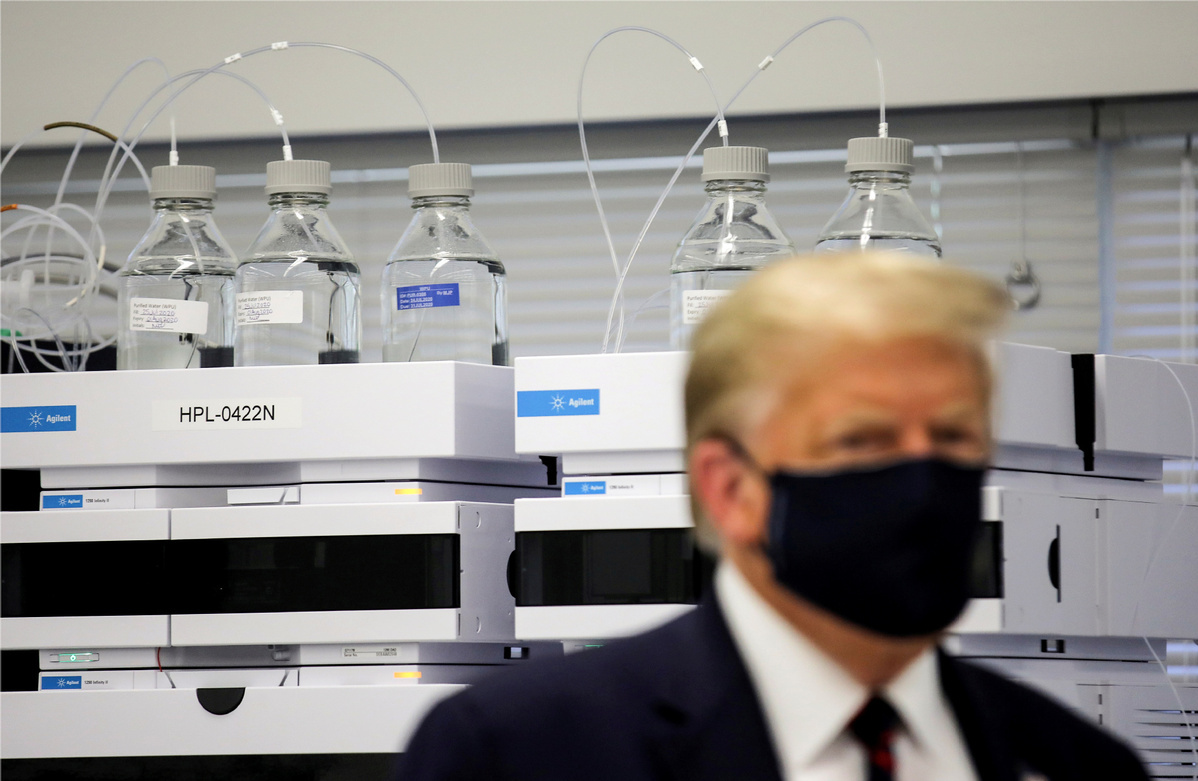 US President Donald Trump wears a protective face mask during a tour of the Fujifilm Diosynth Biotechnologies' Innovation Center, a pharmaceutical manufacturing plant where components for a potential coronavirus disease (COVID-19) vaccine candidate Novavax are being developed, in Morrrisville, North Carolina, US, July 27, 2020. (Photo: Agencies)

The US death toll from COVID-19 approached 190,000 Wednesday, with at least a half-million children infected, as a top health official undercut President Donald Trump's suggestion that a vaccine may be available by Election Day.

Francis Collins, director of the National Institutes of Health, told a Senate hearing Wednesday that he had "cautious optimism" a safe and effective vaccine would be approved by year-end, adding "but even that is a guess".

"Science and science alone will be the way in which this decision is made, otherwise I'll have no part in it," he told members of the Senate Health, Education, Labor and Pensions Committee.

Trump has made approval of a coronavirus vaccine a cornerstone of his campaign and repeatedly said it could be greenlighted before the Nov 3 election, according to a Washington Post report.

"Under Operation Warp Speed, we're producing a vaccine in record time. This is a vaccine that we're going to have very soon, very, very soon. By the end of the year, but much sooner than that perhaps," Trump said at a campaign rally Tuesday night.

But Collins said that to try to predict whether it happens on a particular week before or after a particular date in early November is "well beyond anything that any scientist right now could tell you and be confident they know what they are saying".

US Surgeon General Jerome Adams also said that the vaccine will be safe and effective, or it will not be approved.

"I think it's also important to understand we have a once-in-a-century pandemic superimposed on top of a presidential election. That's made messaging even more difficult and concerning," he said at the hearing.

At a news briefing, White House Press Secretary Kayleigh McEnany said that a vaccine before the end of the year is the goal.

"Our timing is not about the election; it is about saving lives. And 'by the end of the year' has always been our goal. But, of course, a safe and effective vaccine, we will take it as quickly as we can get it," she said.

Wednesday's hearing took place when the COVID-19 death toll in the US surpassed 190,000, according to John Hopkins University data, while confirmed cases in children exceeded a half-million.

At least 513,000 US children have been infected with the novel coronavirus, according to the American Academy of Pediatrics and Children's Hospital Association, which began tracking cases in the spring. The groups released their latest weekly report on pediatric coronavirus cases Tuesday.

"This rapid rise in positive cases occurred over the summer, and as the weather cools, we know people will spend more time indoors," said Sean O'Leary, vice-chair of the AAP Committee on Infectious Diseases, according to a statement from the academy.

"The goal is to get children back into schools for in-person learning, but in many communities, this is not possible as the virus spreads unchecked," he said.

Despite the risk, a Trump administration appointee at the Department of Health and Human Services is trying to prevent Dr Anthony Fauci, the government's top infectious diseases expert, from speaking about the risks that the coronavirus poses to children, politico.com reported Wednesday.

Emails obtained by politico.com show Paul Alexander, a senior adviser to Michael Caputo, HHS's assistant secretary for public affairs, instructing press officers and others at the National Institutes of Health about what Fauci should say during media interviews.

For example, on Tuesday, Alexander told Fauci's press team that the scientist should not promote mask-wearing by children during an MSNBC interview.

"Can you ensure Dr. Fauci indicates masks are for the teachers in schools. Not for children," Alexander wrote. "There is no data, none, zero, across the entire world, that shows children, especially young children, spread this virus to other children, or to adults or to their teachers. None. And if it did occur, the risk is essentially zero."

In the first global projections of the COVID-19 pandemic by nation, the Institute for Health Metrics and Evaluation (IHME) at the University of Washington's School of Medicine predicts nearly 770,000 lives worldwide could be saved between now and Jan 1 through measures such as mask-wearing and social distancing.

"We are facing the prospect of a deadly December, especially in Europe, Central Asia, and the United States," the IHME Director Dr Christopher Murray said in a release.

"But the science is clear and the evidence irrefutable: mask-wearing, social distancing, and limits to social gatherings are vital to helping prevent transmission of the virus," he said.

The institute predicted the number of COVID-19 deaths in the US could more than double by Jan 1 to around 410,000, in a "most likely" scenario that assumes individual mask use and other mitigation measures remain unchanged.