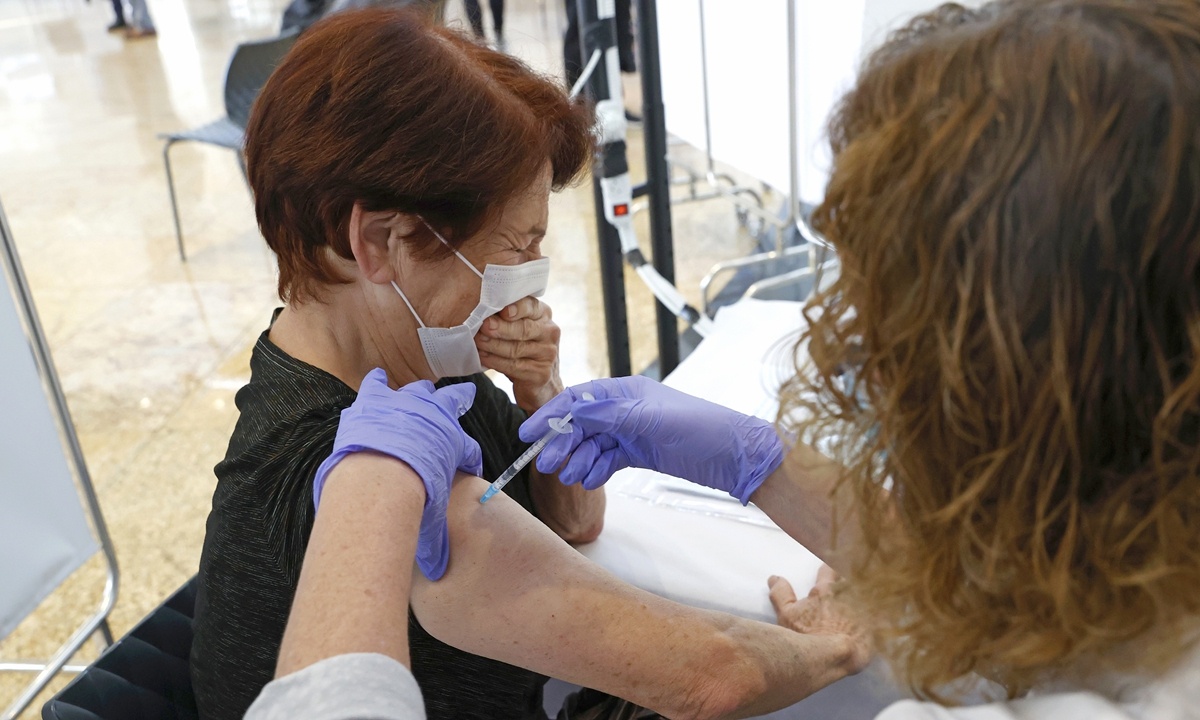 A senior reacts as she gets vaccinated against COVID-19 at Maccabi Health Services in the Israeli coastal city of Herzliya, north of Tel Aviv, on Monday. Israel has ordered 14 million doses of the vaccine - covering 7 million people, as two doses are required per person for optimal protection - from Pfizer as well as US biotech firm Moderna. (Photo: AFP)

As European countries have ramped up their lockdown measures amid a resurgence of COVID-19 cases and the US broke the global record for daily new infections on Friday with more than 400,000 cases, China is moving on with vaccine research and development (R&D) under control as Chinese vaccine producer Sinovac is one step closer to vaccine approval in Brazil after being issued a good manufacturing practices (GMP) certification on Monday.

More than 1 million people have already been vaccinated in China, and in a plan released by Chinese health authorities over the weekend, another 50 million people in high-risk groups will be inoculated by February 5 in the first stage of a two-step mass vaccination program. Vaccination is the last stage in China's anti-epidemic strategy and it will protect Chinese people from imported cases of COVID-19, experts said.

However, no country or region should rely on vaccines as a cure-all to overcome the coronavirus, experts warned, noting that strict anti-epidemic measures must be continued even after mass vaccination is conducted.

"Vaccines will help, but putting all your eggs in one basket will definitely not work," Yang Zhanqiu, a virologist from Wuhan University, told the Global Times on Tuesday.

Detailed data is still lacking on the vaccines, their efficacy and protection duration, especially data on seniors and children, Yang said.

GMP is a system for ensuring that products are consistently produced and controlled according to quality standards. It is designed to minimize the risks involved in any pharmaceutical production that cannot be eliminated through testing the final product, according to the International Society for Pharmaceutical Engineering.

The certificate was issued after Anvisa on December 16 sent a technical team to China to inspect Sinoavac's CoronaVac vaccine factory and concluded its evaluation over the weekend, Anvisa said in a statement on Monday.

The completed step is one of the prerequisites for continuing both the registration process for Sinovac's vaccine and an eventual request for authorization for emergency use of the vaccine that will be presented to Anvisa. It is also part of the agency's continuous efforts to make vaccines available to the population with quality, safety and efficacy in the shortest possible time, according to the announcement.

The CoronaVac vaccine is under Phase-III clinical trials in Brazil's Sao Paulo state.

Joao Doria, governor of Sao Paulo state, has announced that data from the trials will be released on Wednesday (December 23) and he expects the state to begin inoculating residents in January 2021.

The move comes on the same day when Chinese national health authorities revealed that they have rolled out vaccination programs for high-risk groups in the country. Analysts said that the improvements together indicate that China is moving closer to providing COVID-19 vaccines to the public despite Western media's usual doubts over Chinese vaccines' safety and efficacy, citing the lack of readily available Phase-III clinical trial data.

Chinese COVID-19 vaccines do not strive to be the first or the best, but more importantly the vaccine R&D demonstrates a respect for science, health officials said Monday at a press conference in response to concerns over China's vaccine R&D lagging behind in Phase-III trials.

The core criteria for evaluating a vaccine include safety, efficacy, accessibility and affordability, not just speed, said Zheng Zhongwei, director of the Development Center for Medical Science and Technology of the National Health Commission.

"China has currently 15 vaccines in clinical trials and five in Phase-III trials. We are leading in various standards. But we're not looking to be the fastest or the best. Respect for science comes first," said Zheng, who heads China's COVID-19 vaccine development team.

According to a document circulating online alleged to be a recording of a video conference on the national disease prevention and control system held on December 15, China plans to vaccinate some 50 million people judged to be at high risk by February 5 and, if things continue to progress well, China's inactivated vaccines are expected to be provided to the public as early as April.

Chinese provinces such as Southwest China's Sichuan and Central China's Henan have announced provincial plans for mass vaccination. Some Chinese medical workers and teachers in East China's Jiangsu Province have also posted on social media that their employers have launched free vaccination for them on a voluntary basis.

China will erect an immunity barrier against COVID-19 via high vaccination rates, Wang Huaqing, chief expert on the immunization program at the Chinese Center for Disease Control and Prevention, told a press conference on Monday.

Research indicates the herd immunity threshold for the novel coronavirus is about 70 percent, which means at least 75 percent of the population should be vaccinated.

Key population groups are the first to receive the vaccination, which will later be expanded to other groups in the country, Wang said, adding that an immunity barrier is established when vaccination rates are sufficiently high.

Accepting vaccination is not only a right of residents, but also an obligation to prevent the epidemic, Wang noted.

Wang's remarks indicate Chinese authorities' confidence in domestic vaccines as well as their determination to promote mass vaccination to protect 1.4 billion Chinese residents from the pandemic which has no end in sight, analysts said.

Some countries have kicked off mass vaccination like the US and the UK, following which more and more countries may relax border controls thus China will have to face an increased risk of imported cases, Zhang Wenhong, a Shanghai-based doctor who specializes in infectious disease, told media on Monday.

On the other hand, the resumption of exchanges between China and other countries will be hampered if mass vaccination is not conducted in China, Zhang Wenhong noted.

Not the only lifeline

The UK has put in place a tougher Tier 4 system of local restrictions to prevent rampant infections. The country is also facing severe threat from a new variant of the virus that is far more infectious than known variations.

The US reported 403,359 new cases on Friday, a new record of daily new infections reported in a country or region.

A new model of the Institute of Health Metrics and Evaluation under the University of Washington estimates that 562,000 Americans will die from the novel coronavirus by April 1, while it is estimated the current vaccination rollout could save more than 34,000 lives by the same date.

If a vaccine is an added bonus to China where the epidemic has been put under control, it would be of timely help to some countries that are still witnessing tens of thousands daily infections such as the US and Brazil.

Facing the seemingly endless pandemic, Western leaders including US Vice President Mike Pence, President-elect Joe Biden and other prominent US politicians have been vaccinated in public to encourage taking vaccine.

"We need to be safer with masks, avoiding indoor crowds, keeping a distance. All of these things are doubly important now," Tom Frieden, former director of the US Centers for Disease Control, is quoted as saying by US media.

Vaccines mean different things to the West and China. For the West, the vaccine is regarded as the panacea and lifesaver of all hopes, while for China it is only part of a comprehensive and effective response to the epidemic and a new boost to a quicker return to normal, a Beijing-based immunological professor told the Global Times on Tuesday on condition of anonymity.

It is impossible to completely prevent the coronavirus by a vaccine alone, Chinese experts warned, because the vaccine's efficacy and durability are all uncertain at present. Also, there are coronavirus variants which bring more risks and challenges to the efficacy of the vaccines being developed, said the expert.

Moreover, the vaccine cannot absolutely end infection and transmissions as some people may become asymptomatically infected after being vaccinated but still can spread the virus. The measure would not be immediately effective as mass production and injection will take some time, said the expert.

The professor estimated the general population will be vaccinated extensively by the fall of 2021. But the pace may slow if the results of Phase-III clinical trials are disappointing.

Even if the vaccines can earn a grace period, like a few months, for the Western countries to heal existing patients, infections will soon rebound if these countries do not implement strict anti-epidemic measures, Chinese experts noted.