It's been five years since carnage and death sent his family running into the night, leaving them separated and terrified as a gunman rained bullets into an outdoor country music festival crowd on the Las Vegas Strip. 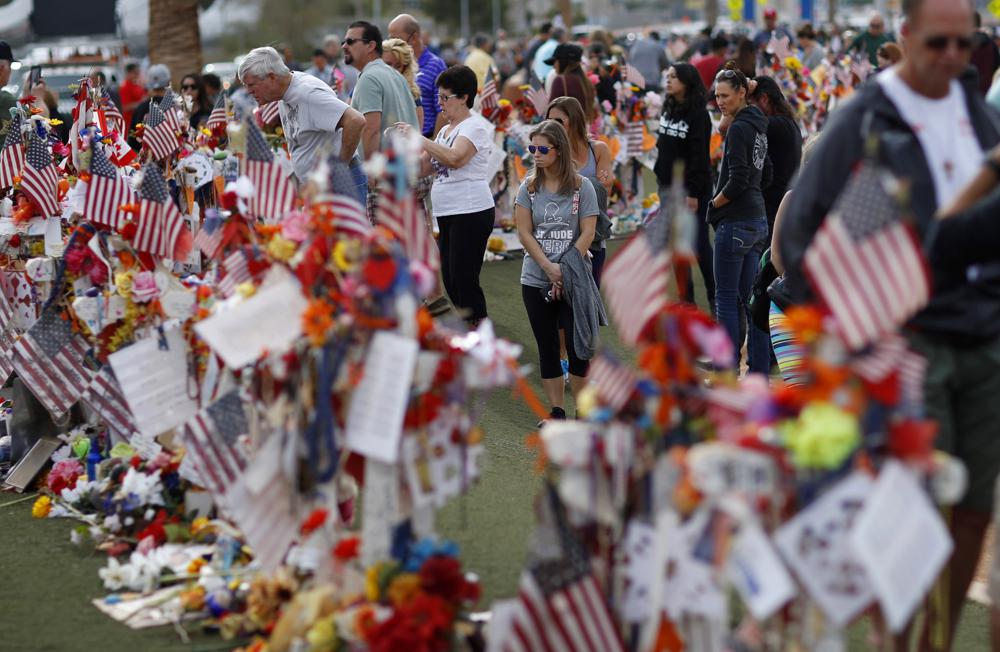 The memories don't fade, they sharpen, William "Bill" Henning said as he prepared for ceremonies in Las Vegas marking the date of the Oct. 1, 2017, massacre.

"Chaotic and unreal," he recalled. "A human stampede. People were bleeding and screaming and running. We all got separated. We didn't know who was alive. That was the most difficult."

He's now part of a survivor community thousands strong, one that's helped him sort through the horror of what happened during the deadliest mass shooting in modern U.S. history. Fifty-eight people were killed and more than 850 were injured among a crowd of 22,000.

In the years since, the grim drumbeat of mass shootings has continued: schools in Uvalde, Texas, and Parkland, Florida; grocery stores in Buffalo, New York, and Boulder, Colorado; bars in Dayton, Ohio, and Thousand Oaks, California; a city building in Virginia Beach, Virginia; a Walmart in El Paso, Texas. Meanwhile, the debate over gun laws in the U.S. rages on, including a renewed challenge to the federal regulation sparked by the Las Vegas shooting.

Nevada U.S. Rep. Dina Titus on Saturday called again for a federal law banning bump stocks, the devices used by the Las Vegas shooter that allow a semi-automatic rifle to fire repeatedly with just one pull of the trigger. They were outlawed by rule by the Trump Administration but face court challenges.

And President Joe Biden also called for renewed efforts to tighten firearms laws Saturday while mourning the victims and praising residents who came together in the aftermath of the shooting.

The president noted executive action he's taken to crack down on ghost guns and rogue gun dealers and the passage of the first significant firearms legislation in 30 years. That bipartisan law signed by Biden in June in part boosts protections for domestic violence victims, funnels cash to states for firearms crime prevention and has money for mental health services.

"But, we're not stopping there," Biden said in a statement. "I am determined to seize this momentum and work with Congress to enact further commonsense gun violence prevention legislation, including banning assault weapons and high-capacity magazines, which have enabled shooters to slaughter so many innocents."

The Las Vegas massacre is part of a horrifying uptick of shootings with especially high numbers of people killed, said James Alan Fox, a professor of criminology, law and public policy at Northeastern University in Boston. Five of the nine mass shootings in modern U.S. history with more than 20 people killed have taken place since 2016, starting with the Pulse nightclub in Orlando and continuing through the elementary school shooting in Uvalde, Texas.

"The severity of public mass shootings has increased in the past few years. That's clear," Fox said. "And worrisome."

Watching the steady stream of shootings in the U.S. is tough for survivors, said Tennille Pereira, director of a Clark County recovery and support program called the Vegas Strong Resiliency Center.

"I know when it keeps happening, people often express feelings of hopelessness," Pereira said. "I think the big thing for Las Vegas is to be able to share with those other communities that healing does occur, and that there is hope."

For people like Henning, part of that hope has been the bond formed with other survivors. The retired computer technician was celebrating his 71st birthday at the Route 91 Harvest Festival with friends, his wife, daughter and three teenage grandchildren when the gunfire began. He suffered a knee injury while escaping that required surgery, but his group made it out without being struck by gunfire.

"At first, the first few years, it's not really sinking in," he said. "The more we organize ourselves, the more that we see each other, it actually brings us back to how serious this situation was."

Many in Las Vegas who won't name the man who police said fired 1,057 bullets from 32nd floor windows of the Mandalay Bay resort during a span of time now memorialized in a Paramount+ streaming service documentary called "11 Minutes."

Police and the FBI spent months investigating and concluded that gunman Stephen Paddock acted alone, meticulously planned the attack and intentionally concealed his actions. He amassed an arsenal of 23 assault-style rifles in his hotel room, including 14 fitted with bump stock devices that help the weapons fire rapidly.

Caches of weapons also were found at Paddock's homes in Reno and Mesquite, Nevada. But he killed himself before police reached him, and local and federal officials said they never identified a clear motive for the attack.

Shortly after the shooting, the administration of then-President Donald Trump banned bump stocks under the same federal laws that prohibit machine guns. Gun-rights advocates sued, saying the weapons didn't qualify as machine guns and it would take an act of Congress to ban them.

The ban has survived several court challenges. But a federal appeals court in New Orleans revived a case there in June, the same day the U.S. Supreme Court handed down a ruling expanding gun rights. That case marked the high court's first major gun decision in more than a decade and has sparked a wave of court challenges to gun laws around the country.

Meanwhile, in Las Vegas, survivors are working toward a permanent memorial on a corner of the former Las Vegas Strip festival ground.

A sunrise remembrance ceremony is scheduled Saturday at the Clark County Government Center, and the names of those killed will be read 10:05 p.m. — the time the shooting started — at a downtown Las Vegas Community Healing Garden.

Survivor Sue Nelson, 67, said she fled from her front-row seat and hid for hours on the Las Vegas Strip, forming deep bonds with others who escaped. She declared she has "survivor sorrow, not survivor guilt" because she didn't do anything wrong.

Nelson drives two hours to Las Vegas from her home in Lake Havasu, Arizona, for memorial events and gives out lapel pins shaped like little guitars and rubber wrist bands stamped with: "We Remember 10.1.17 #Honors58."