WORLD Venezuela expels US envoy in response to sanctions

Venezuela expels US envoy in response to sanctions Venezuela's re-elected President Nicolas Maduro greets his supporters as he leaves after receiving a certificate confirming him as winner of Sunday's election at the National Electoral Council (CNE) in Caracas, Venezuela May 22, 2018. (Photo: Reuters)

President Nicolas Maduro on Tuesday ordered the expulsion of the top US diplomat in Venezuela in retaliation for a new round of sanctions over Venezuela’s widely-condemned election.

The United States was among a string of countries that did not recognize Sunday’s vote.

The 55-year-old successor to Hugo Chavez won re-election easily, but critics said the vote was riddled with irregularities, from the barring of two popular opposition rivals to the offering of a government “prize” to voters.

Accusing US charge d’affaires Todd Robinson of being involved in “a military conspiracy,” Maduro ordered him and another senior diplomat, Brian Naranjo, to leave within 48 hours.

He gave no details of the accusations, but said the US Embassy had been meddling in military, economic and political issues, and vowed to present evidence to the nation shortly.

“Neither with conspiracies nor with sanctions will you hold Venezuela back,” Maduro said, at an event in downtown Caracas at the headquarters of the election board, which is run by government loyalists. 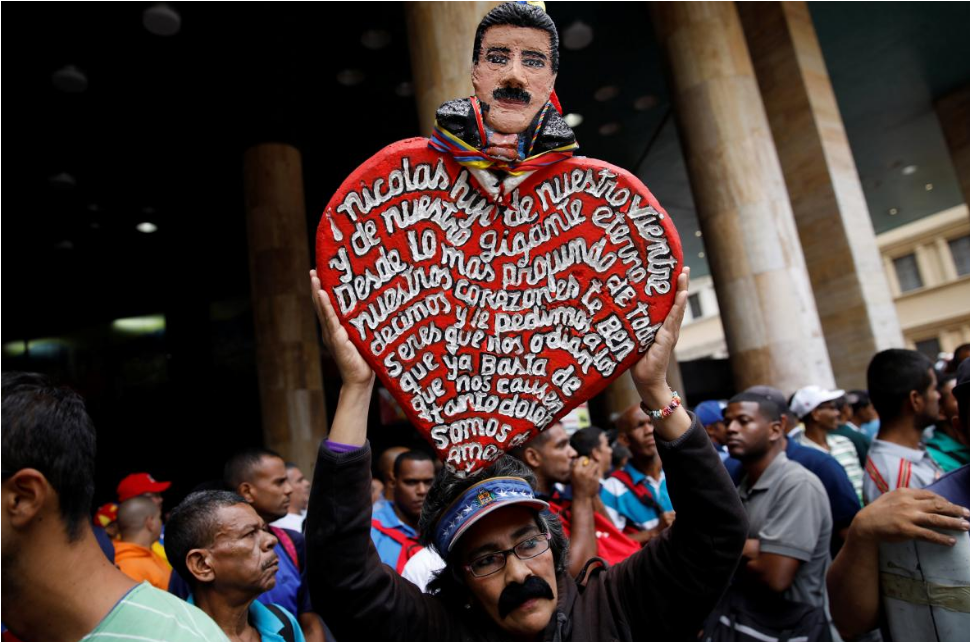 A supporter holds a heart-shaped sign with a figure of Venezuela's re-elected President Nicolas Maduro outside the National Electoral Council (CNE), in Caracas, Venezuela May 22, 2018.(Photo: Reuters)

A press officer for the US embassy in Caracas said she had no immediate comment in response to Maduro’s statements.

Earlier on Tuesday, Venezuela’s foreign ministry called the sanctions “a crime against humanity.” Maduro’s socialist administration, which has long said a US-led “economic war” is to blame for a deep crisis in the OPEC nation, said the new sanctions violated international law.

“Venezuela once again condemns the systematic campaign of aggression and hostility by the US regime to punish the Venezuelan people for exercising their right to vote,” the Foreign Ministry said in a statement. “These arbitrary and unilateral measures constitute a crime against humanity.”

Venezuela’s opposition has accused the Maduro government of behaving immorally and trying to hide shortcomings and corruption behind bombastic rhetoric. The mainstream opposition coalition boycotted Sunday’s vote, calling it a sham aimed at legitimizing Maduro’s rule despite his low popularity.

Among widespread international condemnation of the vote, the European Union said in a statement on Tuesday that the elections did not comply with “minimum international standards for a credible process” and repeated that it would consider the “adoption of appropriate measures.”

Maduro, whose second term will begin next January, won 68 percent of the vote. Former state governor Henri Falcon, who broke with the boycott to challenge Maduro, said he received reports of hundreds of irregularities.

Electoral council chief Tibisay Lucena, who is on individual US and European Union sanctions lists, certified Maduro’s victory in a presentation on Tuesday.

While it only applies to US citizens and residents, a US official told reporters on Monday that the Trump administration has also tried to convince China and Russia to stop issuing new credit to Venezuela. The two have provided billions of dollars in funding for Venezuela in recent years.

But they appeared unlikely to heed the US warnings. Beijing said on Tuesday it believed the United States and Venezuela should resolve their differences via talks, while Moscow said it would not comply with the sanctions.

In its statement on Tuesday, Venezuela’s foreign ministry blamed the US “blockade” of the country for “blocking the population’s access to basic goods.”

Most mainstream economists say the country’s strict currency controls, heavy state intervention and money-printing are responsible for a crisis that has caused widespread shortages of food and medicine and led to mass emigration.