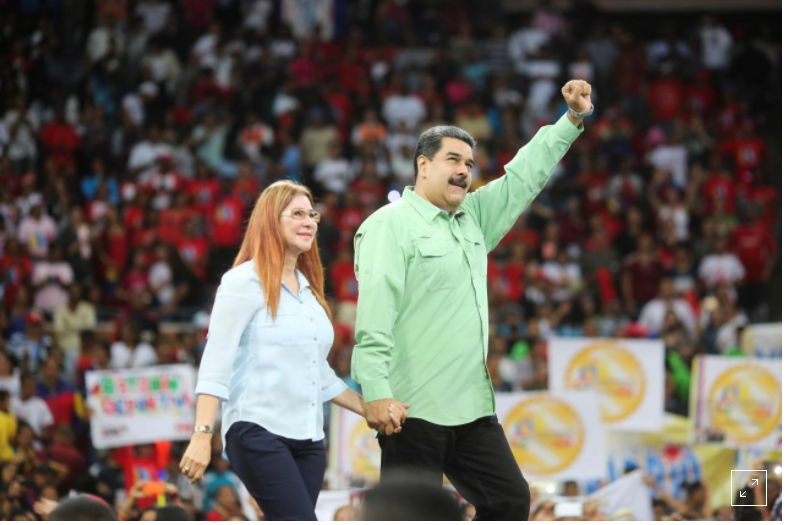 Venezuela's President Nicolas Maduro (R) gestures next to his wife Cilia Flores as they arrive for an event with supporters in Caracas, Venezuela January 26, 2018. Photo: Reuters

Venezuela’s Nicolas Maduro, who pitched himself as the “son” of Hugo Chavez to appeal to voters ahead of his 2013 presidential win, has all but scrubbed mention of the late socialist leader from his campaign for re-election this year.

Chavez is barely anywhere in Maduro’s new campaign song or logo, unveiled in recent days ahead of presidential elections slated to be held before the end of April in the crisis-torn country.

“Together we can do more. Nicolas Maduro, president,” reads the slogan promoting the former bus driver and union leader.

During the 2013 race to replace Chavez, who died of cancer, Socialist Party billboards usually featured the charismatic late president’s face and the slogan, “From my heart, (I want) Maduro president.”

And while the new campaign song, a catchy mix of reggaeton, merengue and rap, makes a brief reference to Chavez by mentioning his nickname “comandante,” the song is squarely focused on Maduro.

“Nicolas Maduro, a driver of victories, is guiding Venezuela to peace and glory!” goes the song, publicized on Maduro’s Twitter feed, with the chorus urging, “Everyone with Maduro!”

That’s a far cry from the 2013 campaign song, which kicked off with a recording of Chavez naming Maduro his political heir and featured the chorus: “Chavez, I swear to you, I’ll vote for Maduro!”

The shift highlights how Maduro, although widely disliked due to a brutal economic crisis that has sparked malnutrition and disease, is seeking to carve out his own political image away from his far more popular predecessor.

“If this turns out to be successful, we could be in the presence of a metamorphosis in the political process to go from ‘Chavismo’ to ‘Madurismo’,” added Canizalez.

But the shift could also heighten growing tensions in the ruling Socialist Party, once firmly held together by the dominant Chavez. Rafael Ramirez, a former oil czar in exile and wanted for alleged corruption, has lashed out at Maduro for his handling of the economy and asked for guarantees to return to the country and face him in primaries.

But officials have said there is but “one candidate” in this year’s vote, solidifying Maduro’s grip on the country after major anti-government protests last year.

During a softball game on Sunday, Maduro and his cabinet played against military officers, who had the words “Chavez lives” emblazoned on their blue shirts.

Maduro, meanwhile, wore a white uniform with the Venezuelan colors on its sleeves.