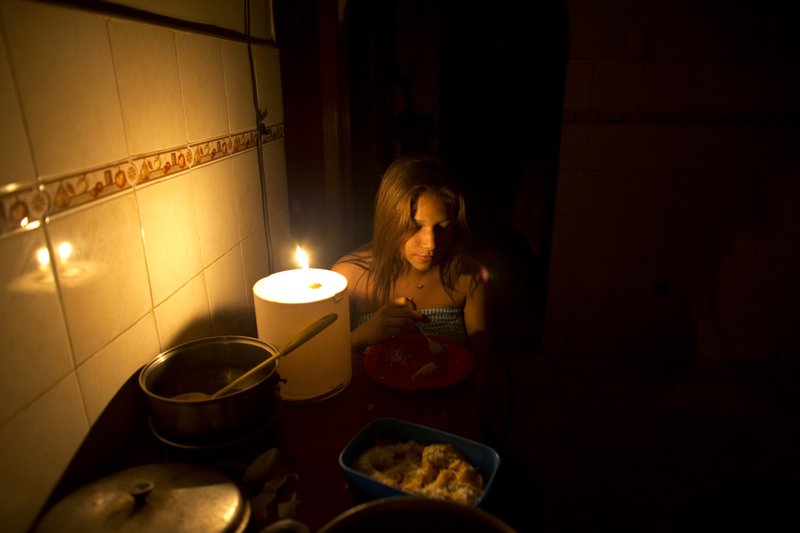 In this April 18, 2018 photo, Jennifer Naranjo, 8 months pregnant, eats by the light of a shrinking candle stub, in La Chinita neighborhood, in Maracaibo, Venezuela. (Photo: AP)

CARACAS, March 11 (Xinhua) -- Venezuela's government on Monday announced four measures to deal with a blackout that has plunged the country in darkness since late Thursday.

In an interview with Caracas-based television network Telesur, Menendez said the first step will be to closely monitor the functioning of medical services.

The second and third measures aim to ensure the delivery of gas and water via tanker trucks to households around the country.

The fourth step aims to guarantee the continuity of the country's CLAP program, which delivers staple foods to households.

Venezuela has in the past suffered from isolated and brief power failures, but this time the blackout has lasted days and affected much of the country.

The government blames sabotage at a central hydroelectric plant by workers colluding with the U.S.-backed right-wing opposition, as part of a plan to incite unrest and undermine President Nicolas Maduro and the ruling party.

The opposition and the United States claimed that the power failure is due to corruption and mismanagement.

Menendez said the strategy to sow discontent failed, describing the attitude of solidarity and civic-mindedness that has prevailed during the blackout as "heroic."

Still, the outage has led to millions of dollars in losses due to lost productivity, he said.

Electricity went off in many parts of the country at 5 p.m. local time (2100 GMT) Thursday, March 7, and has been intermittently restored to certain areas.

"We have defeated coups d'etat, oil sabotage, violent rioters and attacks on our sovereignty, and rest assured we are going to defeat the electricity war," said Maduro.

Caracas, the capital, was generally calm despite more than three days without electricity and now a diminishing water supply, as a result of the power failure. There were few people and vehicles in the streets, mainly due to the government's decision to close schools and government offices.

Caracas residents enjoyed a few hours of electricity until a blast early Monday morning at an electrical substation in central Miranda state knocked the power out again.

According to Miranda Governor Hector Rodriguez, electricity was back on in 80 percent of the state, "however, the system is still unstable."

He urged people to continue to take precautionary measures.