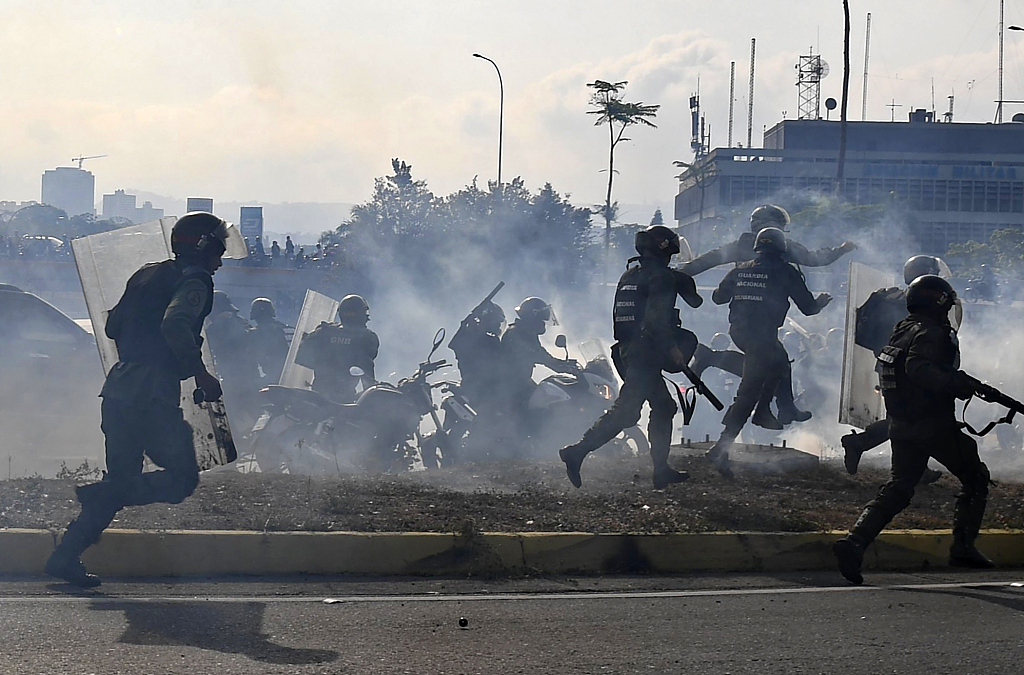 Members of the Bolivarian National Guard loyal to Venezuelan President Nicolas Maduro run after being run under a cloud of tear gas after being repelled with rifle fire by guards supporting Venezuelan opposition leader Juan Guaido in front of La Carlota military base in Caracas on April 30, 2019. (Photo: VCG)

The "intelligence" work allowed the army to follow rebel soldiers as they entered the main thoroughfare of Altamira, in an effort to take over the La Carlota military base in the capital Caracas, Padrino said, adding that the scale of the rebellion as "very small" and "insignificant."

Flanked by high-ranking members of the army at the Caracas Battalion, Padrino said some 80 percent of the rebel troops that got as far as Altamira "were tricked ... through clumsy manipulation" and most have already returned to their units.

"Tell the people of Venezuela and the whole world that this violent action, which undermines the peace, the tranquility of the citizenry, has been defeated," said Padrino.

The minister said that the coup was directed from Washington "with the intention to shed blood in the streets of Caracas."

Opposition leader and self-proclaimed president "in charge" Juan Guaido announced that a coup was underway earlier Tuesday, releasing video footage of himself, accompanied by a group of soldiers who had presumably turned against the government, near the La Carlota base.