WORLD Venezuelans call for dialogue as political crisis drags on

Venezuelans call for dialogue as political crisis drags on 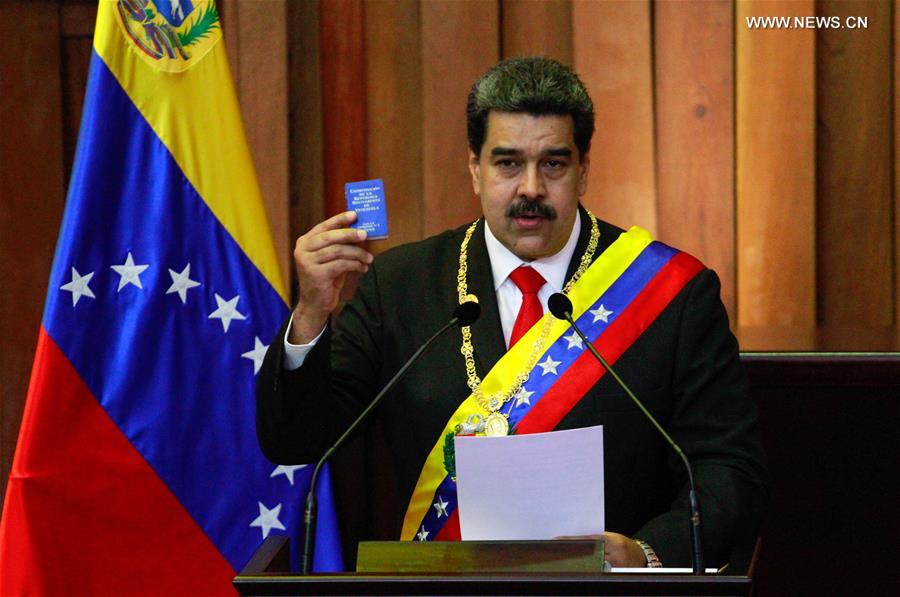 Venezuelan President Nicolas Maduro holds a small copy of the constitution as he gives a speech during the presidential inauguration ceremony in Caracas, Venezuela, Jan. 10, 2019. (Photo: Xinhua/Andrea Romero)

CARACAS, March 10 (Xinhua) -- Venezuelans were hit with a prolonged nationwide blackout that capped a week of continued strife between the ruling socialist party and the right-wing opposition and its international backers.

The power outage, which the government blamed on sabotage at a central hydroelectric plant, brought cities around the country to a standstill, including the capital Caracas. Schools and offices were closed. Only vital services such as airports and hospitals kept functioning with emergency generators.

Electricity was restored Friday afternoon in at least 10 Caracas districts after 20 hours' outage, and also in several eastern states. However, the capital was hit by another blackout on Saturday.

Venezuelan President Nicolas Maduro on Saturday denounced the new attack on Venezuela's electricity system at a massive rally in Caracas.

He said the government has stepped up efforts to free the national electric company from infiltrators and coup plotters and protect the company from cybernetic and electromagnetic attacks directed by the United States.

The power outage is amid the country's ongoing political tensions, as the West continued to prop up the opposition in a bid to oust Maduro from power.

Political tensions between the government and opposition groups in Venezuela came to a head after Maduro was sworn in to a new term on Jan. 10.

The opposition, which largely boycotted the presidential elections in May last year, refuses to recognize Maduro's re-election victory and anointed a president of its own.

On Wednesday, Venezuela declared German ambassador Daniel Martin Kriener persona non grata and gave him 48 hours to leave the country after the envoy demonstrated his allegiance to the opposition.

Kriener was among a handful of ambassadors who went to the airport on Monday to welcome opposition leader and self-proclaimed "interim president" Juan Guaido on his return from a tour of Latin American countries that support Venezuela's Washington-backed opposition.

A day later, the White House's special representative for Venezuela, Elliott Abrams, announced the U.S. plans to "expand the net" of sanctions designed to choke off the government's access to financial resources, targeting banks handling transactions for the state.

Military intervention in Venezuela poses quite a challenge, at least initially, according to Reinaldo Iturriza, Venezuela's former minister of culture.

Despite worsening political and economic woes, the government has so far enjoyed the civilian and military support it needs to withstand the pressure.

"There is a military operation against Venezuela in the works, and it failed in its initial stage," Iturriza said.

While "the scenario of a U.S. military intervention or one carried out through the government of Colombia has lost momentum, the option is not off the table yet," he warned.

One of the reasons why direct military intervention lost steam was that the fracture within the Lima Group of hemispheric countries advocating regime change in Venezuela.

"The Lima Group has been rapidly unraveling ... as it is now public that some of the countries that had a very interventionist stance have since distanced themselves from the option of a direct military intervention," said Iturriza.

Still, the Lima Group will probably cooperate with the imposition of economic sanctions.

"It is quite likely that they are going to continue to strangle the national economy in this way," he said.

Venezuelan political analyst Luis Quintana, who teaches at the Bolivarian Military University of Venezuela, said the key to breaking the impasse would be to give voice to those willing to compromise and mediate.

Quintana highlighted the Montevideo Mechanism for mediation promoted by Uruguay, Mexico and Bolivia, a "regional initiative the government is betting on" to forge a peaceful way out of the crisis.

"The international community must demand that sanctions be lifted and the parties meet for talks, for negotiation," said Iturriza.

"The important thing now is to return to the path of democracy, the path of political dialogue and, fundamentally, let Venezuelans themselves resolve their internal affairs," he added.

The main "challenge that faces all Venezuelan society, including its government, is tackling the economic situation," Iturriza said.