Venezuelans stage protest against US sanctions

Thousands of supporters of Venezuelan President Nicolas Maduro took to the streets in capital Caracas on Wednesday to protest fresh moves by the US to tighten sanctions against the ruling authorities. 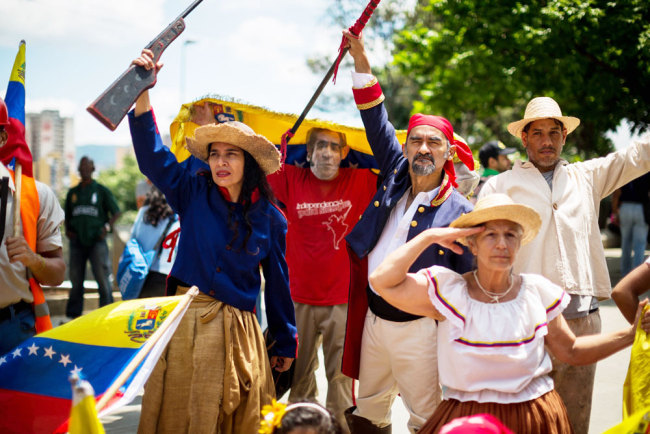 Thousands of people participate in a march in Caracas, Venezuela, on August 7, 2019 to protest fresh moves by the US to freeze all Venezuelan government's assets in the United States and block transactions with its authorities. (Photo: IC)

Carrying the national flag and holding anti-US slogans, demonstrators gathered at the city center to listen to some government officials.

The protest came after US President Donald Trump issued an executive order on Monday to freeze all Venezuelan government's assets in the United States and block transactions with its authorities.

The move, with an aim to choke off the government's access to capital, especially US dollars, and undermine the ruling of Maduro and his United Socialist Party of Venezuela (PSUV), escalated tensions between the two countries.

The new sanctions imposed by the US administration are in a series of "arbitrary measures of economic terrorism against the Venezuelan people," the Foreign Affairs Ministry said, noting that Washington wants to "formalize its criminal economic, financial and trade embargoes."

Wednesday's rally was also a commemoration to mark the bicentennial of the historic Battle of Boyaca, which is considered the beginning of the independence of North of South America.

During the rally at the National Pantheon in Caracas, Diosdado Cabello, vice president of the PSUV party, condemned the sanctions, saying that the U.S. move against Venezuela "makes us more united and deepens our love for the country."

"The United States is absolutely mistaken," Cabello, who is also president of the Constituent Assembly, told the crowd.

The Maduro government will continue to hold dialogue with the opposition despite U.S. interference, Cabello said.

He blamed the far-right opposition led by self-proclaimed interim president Juan Guaido for "celebrating the sanctions imposed on their people."

Venezuela broke off diplomatic ties with the United States at the beginning of the year after Washington refused to recognize Maduro's reelection to a second term and endorsed Guaido as "interim president" of the country.

Hector Rodriguez, governor of the central state of Miranda and member of the government delegation to the talks brokered by Norway, called for greater unity of the country to confront the heightened sanctions.