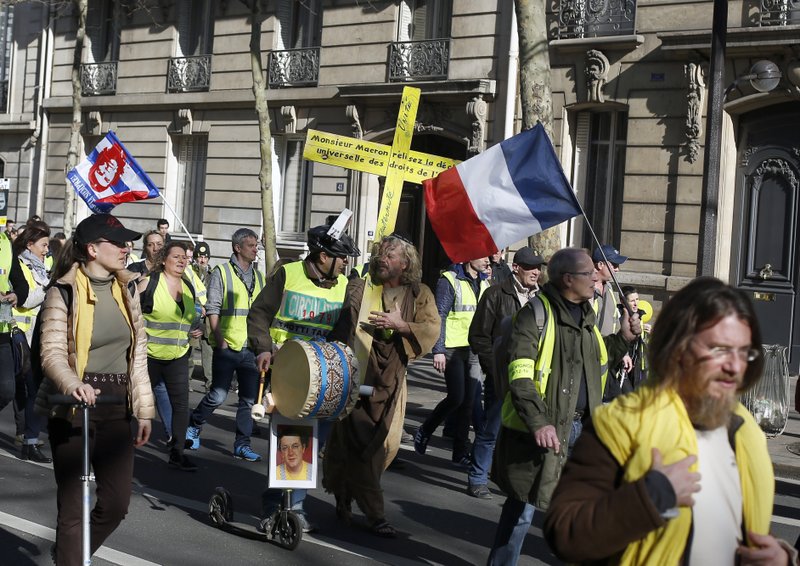 An upsurge in anti-Semitism in France reached a climax this weekend with a torrent of hate speech directed at a distinguished philosopher during a march of yellow vest protesters, adding to questions about the radicalized fringes of the movement hidden within French society and troubling the nation.

Paris judicial authorities opened an investigation Sunday into anti-Semitic remarks hurled at Alain Finkielkraut a day earlier as he accompanied his mother-in-law to her Left Bank home in Paris.

The investigation is being conducted into “public insult based on origin, ethnicity, nationality, race or religion” after a band of men in the protest march raged at Finkielkraut. “Go back to Tel Aviv,” ″Zionist,” and “France is our land” were among the insults captured on video.

The assault came days after the government said anti-Semitic incidents in France soared last year in what Interior Minister Christophe Castaner called a “poison” spreading “like a venom” and “rotting minds.”

The scene with Finkielkraut was a vicious verbal interlude as thousands of protesters made their way through Paris for the 14th consecutive Saturday of demonstrations by the yellow vest movement. The movement, whose marches have been marked by violence and destruction, has become the top domestic challenge for President Emmanuel Macron, who is accused by demonstrators of favoring the haves over have-nots.

Several thousand protesters gathered again Sunday in Paris to mark the three-month anniversary of the movement, which started Nov. 17 with nationwide protests over fuel tax increases. But the sparse turnout reflected a growing disenchantment with the grassroots phenomenon, once heartily supported, but increasingly divided and violent.

Finkielkraut, a member of the prestigious Academie Francaise, said in two TV interviews Sunday that he is worried by the changing nature of the movement that he initially supported.

But he told French television station LCI he doesn’t intend to file a complaint.

“I want one thing: I want to know who they are. ... What movement do they belong to?” Finkielkraut said on LCI.

There are suspicions, and clear clues, that some extremist groups have infiltrated the yellow vest movement.

Finkielkraut and others point to ultra-leftists and the ultra-right as likely forces behind violence. He also pointed to a comedian known as Dieudonne and an intellectual, Alain Soral, both convicted in the past of racism. Dieudonne showed up at one yellow vest event.

Finkielkraut singled out one bearded, screaming man in the video.

“He told me, (a) Jewish (man), that ‘France belongs to us,’” Finkielkraut said in an interview with BFMTV. “This phrase is terrible, extraordinarily threatening,” just like “dirty racist” or “dirty Zionist.”

The man also said that “God will punish you,” Finkielkraut said.

Interior Minister Christophe Castaner tweeted Sunday that the main suspect in the stream of insults had been identified.

BFMTV said the person is a Salafi, a follower of a Muslim strain that makes a literal reading of the Quran holy book. The report could not be immediately confirmed.

For Finkielkraut, whose parents immigrated from Poland in the 1930s and whose father was sent from France to Auschwitz for three years, anti-Semitism in France has changed its language.

Injuries like “dirty Jew” have been replaced by “dirty racist,” he said, adding that this is more worrisome than fascism, which “you can mobilize against.”

“Don’t mix up the eras and think we are reliving the 1930s” with a rise of Hitler, he insisted on LCI, noting he has been attacked at two other events since 2014, once spat upon.

Today “they tell you that the Jews are doing exactly the same thing in Palestine ... They will condemn the Jews today because it’s the Holocaust that Palestinians are enduring,” he said.

Last week, the government reported a huge jump in incidents of anti-Semitism last year: 541 registered incidents, compared to 311 in 2017.

However, one anti-Semitic incident last week appeared to contradict Finkielkraut’s hypothesis that fascist signs are being replaced with a “cleaned-up language.” Swastika graffiti was found Feb. 11 on street portraits of Simon Veil, a Holocaust survivor considered a French national treasure for her life’s work.

In other acts a week ago, the word “Juden” was painted on the window of a bagel restaurant in Paris and two trees planted at a memorial honoring a young Jewish man tortured to death in 2006 were vandalized, one cut down.

Macron was quick to condemn the verbal attacks on Finkielkraut, tweeting they are the “absolute negation of what we are.”

Finkielkraut expressed doubt the Gilets Jaunes protesters were among those shouting at him, although his attackers wore the movement’s adopted garb — the fluorescent yellow safety vests required in all French calls for emergencies.

The movement has broadened from protesting fuel tax hike to include a range of concerns about France’s living standards and the economic stresses facing ordinary families.

Numerous political parties are holding an anti-Semitism rally in Paris on Tuesday. However, Finkielkraut said he didn’t yet know whether he would attend.