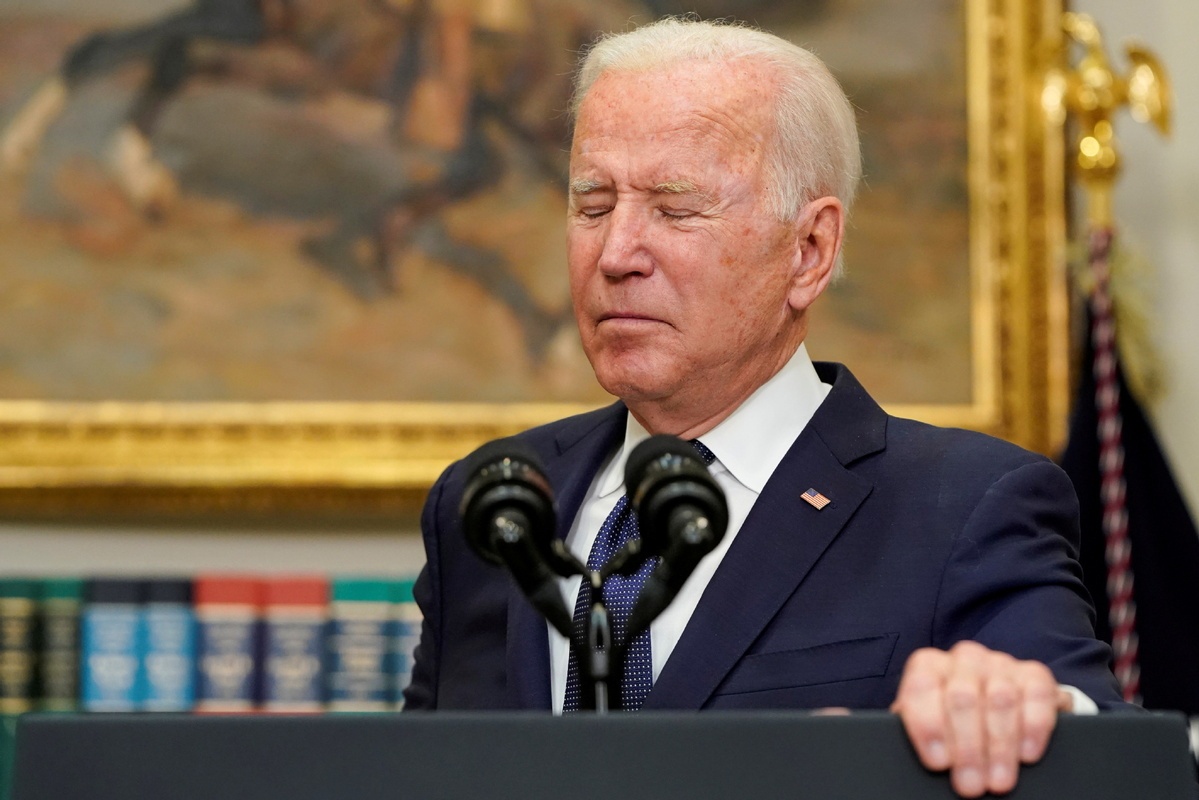 US President Joe Biden speaks about Hurricane Henri and the evacuation of Afghanistan, in the Roosevelt Room of the White House, in Washington, Aug 22, 2021. (Photo: Agencies)

One group stunned perhaps more than anyone about the stark images out of Afghanistan are the men and women of the US military who served there, with a common refrain being, "Was it worth it?"

That question was likely raised countless times across the country as images emerged over the past week of the Afghan government falling to the Taliban. Even more piercing were scenes of desperate people trying to grasp onto American military planes at the Kabul airport to find a way out of the country.

US President Joe Biden who has watched his approval ratings fall over the situation in Afghanistan, on Sunday said that 28,000 people have been evacuated so far. He also acknowledged that the Aug 31 US withdrawal date could be extended.

The US embassy on Saturday told citizens not to travel to the airport without "individual instructions from a US government representative", citing potential security threats nearby.

A blog on the Veterans Administration website titled "Afghanistan: How Veterans can reconcile service" has generated intense comments.

"Christine", a registered nurse, wrote, "In my job, I see firsthand the ruined lives of young people sent off to (Afghanistan) to fight the endless war to impose democracy on a country with no history of or desire to embrace such a system. All of it began with a lie about WMDs and then we were basically stuck."

US Representative Brian Mast, a Florida Republican and Army veteran who lost both of his legs after he was struck by an IED (improvised explosive device) in Afghanistan in 2010, said Friday on Fox News that the chaos is causing an "Afghanistan hostage crisis".

Mast said that "every minute that goes by", the Taliban increases its understanding of how to operate US weapons it has seized.

"What drone capabilities did they pick up by taking over that US military equipment that they can fly into an aircraft, given that they're going to be flying thousands of Americans and others out of this situation?" he said.

On Friday, Biden found some support from VoteVets, which describes itself as a group for progressive veterans. The group published an open letter signed by 4,300 veterans, 150 of whom served in Afghanistan.

"We the undersigned are resolute in our support of President Biden's decision to end the war in Afghanistan," the letter read, and also blamed the "elites who pushed us into a 20-year war with no achievable military mission".

"I know it is painful to see the images from Kabul and elsewhere in Afghanistan, especially for the hundreds of thousands of Veterans who have served there since that fateful day in September 2001. … "It's entirely natural to feel a range of emotions about the latest developments in Afghanistan — and if you are feeling depressed, angry, heartbroken, or anything else, we at VA are here for you," he said.

"Tim" wrote on the VA blog: "As a former active member of the Marine Corps, I am crushed and feel for my fellow comrades that lost family members and friends in all of the armed services. Tomorrow, I am going to hang my American Flag upside down to represent my anger. PS Thanks BIDEN 'REMEMBER LEAVE NO MAN BEHIND'. WE ARE LEAVING A LOT BEHIND."

"When did the Taliban "ever" attack the US? Short answer. NEVER!!!! They (some) grow poppy so heroin is sent here but no ATTACK has ever been launched at us by them!!!" wrote "Dallas". … The question that all have and will be watching is ... how will YOU (US govt) treat the men and women who come back w/f'd up bodies & minds If history proves … to repeat itself, you will deny them much-needed services and toss them on the curbs of this country!!"

"Henry" wrote: "One thing is clear, the United States has had a crisis in national political leadership that has been exacerbated by politicizing all aspects of society, and it emanates from a two-party Congress. Veterans are caught in this web, and they may be part of the solution for the nation now in the future from elective office to school board members to members of organizations promoting good government."

"Expect PTSD (post-traumatic stress disorder) to continue to soar for as long as we keep asking otherwise decent people to do morally reprehensible things for the benefit of a select few," wrote "Ben".

"Seeing the fall, it's like all your hard work has gone to waste," Ashton Kroner, who served in the Marine Corps in Afghanistan in 2011 and 2012, told the Chicago Tribune.

She is an outreach coordinator at Rush University Medical Center's Road Home Program, which provides free mental health services to veterans and their families.

"I've lost friends to suicide, and seeing the emotional and physical tolls that that deployment put on your families, put on ourselves," she said. "It's getting punched in the gut over and over and over again," Kroner said of watching the current scenes.

Justin Kurtzhalts, 34, served multiple tours in Afghanistan throughout some five years in the Army.

"Just realize (they're) human beings just like us, that have the same thoughts and feelings and just a different culture, that are being destroyed right now," Kurtzhalts told the Tribune.

"I'm now sitting here 20 years removed almost from the very event that propelled me into the military, which was the attacks of September 11," Matt Zeller, an Afghanistan veteran and advisory board chair of the Association of Wartime Allies, told CNN.

"And now I'm wondering if the last 20 years were completely pointless and in vain. All the friends I lost in Afghanistan — what were their deaths for?"

Zeller served as an embedded combat adviser to Afghan security forces. In 2008, on his 14th day in the country, his Afghan interpreter, Janis Shinwari, saved his life, killing two Taliban fighters who were about to kill him.

Zeller later helped Shinwari get a visa to the United States. They later started No One Left Behind, an organization that helps bring interpreters who worked with American troops to the US.

Gerald Keen, who served in Afghanistan, told CNN that American soldiers should not be sent back to do a job that should have been done before the Bagram Airfield was closed.

"Now we've got to send soldiers back in harm's way to help evacuate the embassies and these interpreters who fought side by side with us every day," Keen said.

Bryan Moore, an Army veteran of Afghanistan, said he heard a radio host asking if the mission was in vain.