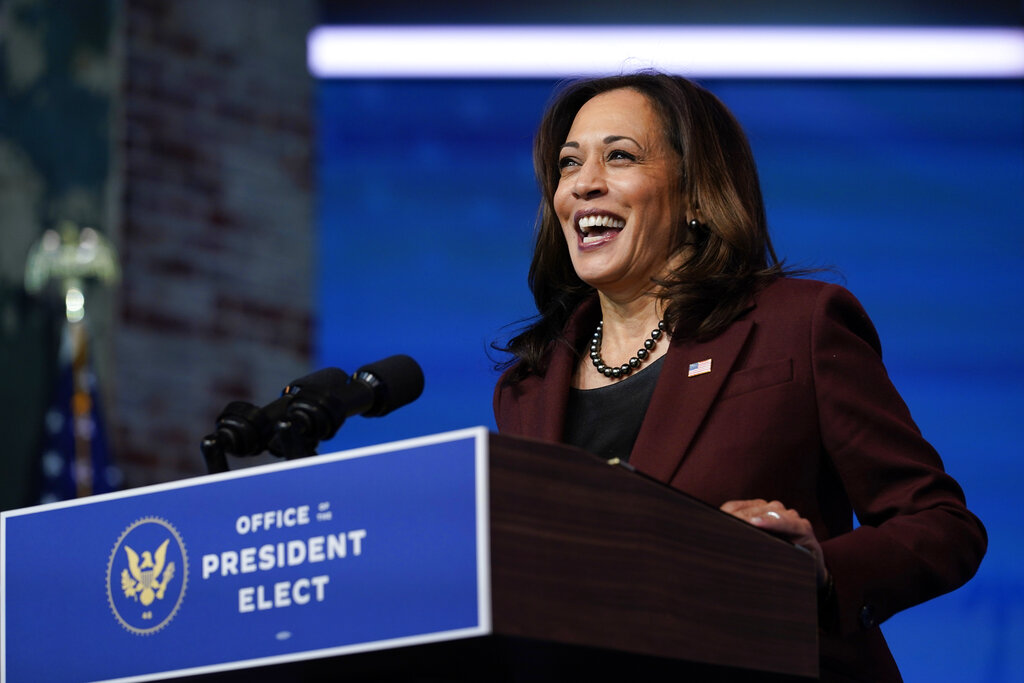 In this Tuesday, Nov. 24, 2020 file photo, Vice President-elect Kamala Harris speaks as she and President-elect Joe Biden introduce their nominees and appointees to key national security and foreign policy posts at The Queen theater, in Wilmington, Del. (Photo: AP)

Aides to the California Democrat confirmed the timing and said Gov. Gavin Newsom was aware of her decision, clearing the way for him to appoint fellow Democrat Alex Padilla, now California's secretary of state, to serve the final two years of Harris' term.

Padilla will be the first Latino senator from California, where about 40% of residents are Hispanic. Newsom announced his choice in December, following intense lobbying for the rare Senate vacancy from the nation's most populous state.

Harris will give no farewell Senate floor speech. The Senate is not scheduled to reconvene until Tuesday, the eve of Inauguration Day, two weeks after supporters of outgoing President Donald Trump stormed the Capitol as lawmakers were meeting to affirm Biden's election victory.

Padilla's arrival, along with Harris becoming the Senate's presiding officer when she's sworn-in as vice president, is part of Democrats' upcoming Senate majority. But the party still needs Sens.-elect Jon Ossoff and Raphael Warnock of Georgia to be certified as victors in their Jan. 5 elections and then be sworn in.

Harris is the first woman ever elected vice president — and the first Black woman and first woman of South Asian descent to serve in that office. But her Senate departure leaves the chamber’s roster without a Black woman. Harris was just the second Black female senator, winning her California election 17 years after Democrat Carol Moseley Braun finished a single term representing Illinois.

Democrats were in the minority during Harris' four years on Capitol Hill. Perhaps her biggest mark came as a fierce questioner of judicial nominees and other witnesses as a member of the Senate Judiciary Committee.

Harris was viewed as a future presidential candidate almost immediately upon joining the Senate in 2017. She announced her White House bid in January 2019 but dropped out the subsequent December after a lackluster campaign and before the ballots were cast in Iowa's first-in-the-nation caucuses. Biden, himself a former senator, invited her to join the national ticket in August.

But Republicans will maintain a narrow majority until all three take office and Harris sits in the presiding officer's chair.

Harris' early departure from the Senate has multiple precedents.

Biden was the last sitting senator to be elected vice president. He resigned his Delaware post on Jan. 15, 2009, five days before he and Barack Obama were inaugurated. Obama, a senator at the time of his election, had resigned his Illinois seat two months before Biden.

Harris and her husband, Doug Emhoff, have enjoyed conversations and debates over how Emhoff should be addressed when Harris takes office.

During their joint interview with “CBS Sunday Morning,” Harris joked that some of Emhoff’s friends suggested he could be dubbed the “first dude.” Emhoff added there were other ideas “I can’t repeat on national television.”

Vice presidents’ spouses — all of them wives before Emhoff have at times been called the “second lady,” a nod to the “first lady” being the president’s wife.

All kidding aside, Emhoff told CBS’ Jane Pauley, he would be the first “second gentleman” in U.S. history.