Vichai Srivaddhanaprabha, the Thai billionaire owner of Leicester City, whose helicopter crashed Saturday outside the Premier League club's stadium, is the author of one of football's greatest fairytales. 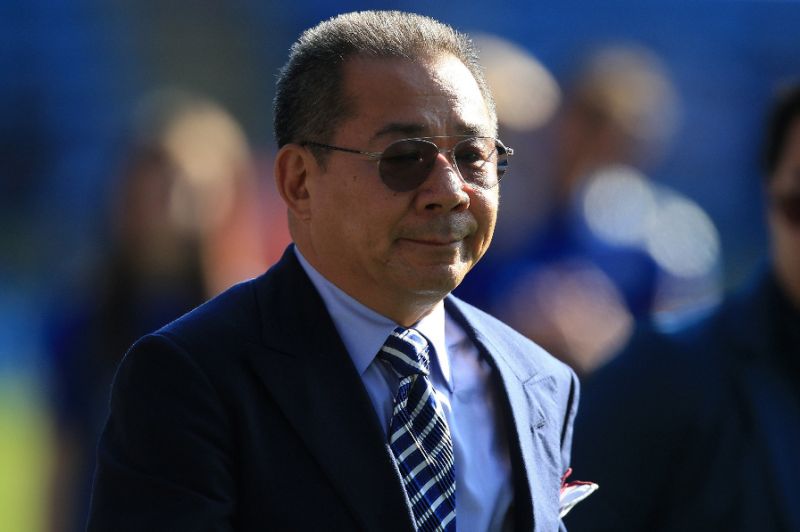 Polo-loving Vichai, 61, endeared himself forever to Leicester fans when the unfashionable club broke the grip of England's giants to win the Premier League in 2016 -- the first top-flight title in their history.

The title win, against overwhelming odds, put the city in England's Midlands on the global sporting map and brought glory to generations of long-suffering fans.

Leicester have been unable to reach the same meteoric heights since, finishing 12th in the following season and ninth in 2017-18 but are now firmly established as a Premier League club.

Forward Jamie Vardy, the talisman during Leicester's glory season, on Saturday tweeted a message that simply showed eight hands held together in prayer.

Bespectacled Thai tycoon Vichai is known for his unerring common touch, dishing out free beer and doughnuts at Leicester's King Power Stadium, where he often lands his helicopter in the centre circle.

Footage from the scene of the crashed helicopter belonging to Thai tycoon Vichai Srivaddhanaprabha after it came down near the stadium of his UK football club Leicester City (Video source: AFP)

It was from there that his helicopter took off after Saturday's 1-1 draw with West Ham before crashing in the car park directly outside the stadium.

Despite his popularity, Vichai remains an enigmatic figure and rarely gives interviews, preferring to let his son Aiyawatt, known as "Top", act as the family frontman.

He also rubs shoulders with celebrities and his surname, meaning "light of progressive glory," was bestowed by Thailand's late king Bhumibol Adulyadej.

"He (Vichai) is a successful businessman and he tried to challenge himself to get something done," Top, Leicester's vice-chairman, told AFP in Bangkok in 2016.

"He said, I think two or three years before, that he wants the team to be a success in the Premier League, and now we are."

Emergency services work at the scene outside Leicester City Football Club's King Power Stadium in Leicester, eastern England, after a helicopter belonging to Thai billionaire Vichai Srivaddhanaprabha crashed in a car park outside the stadium.

The avuncular Vichai has carefully navigated Thailand's treacherous political waters of recent years, while taking his King Power empire from strength to strength.

He established the company in 1989, starting with a single shop in Bangkok and building a multi-billion-dollar empire.

Leicester supporters quickly warmed to him after he bought the then second-tier Championship strugglers for an estimated 40 million pounds ($51 million) in 2010.

The devout Buddhist is a firm believer in the power of karma, flying in Thai monks to bless Leicester's pitch and give their players lucky amulets.

And while pumping tens of millions of pounds into the team, club debt and infrastructure, Vichai has spent judiciously.

Leicester's success was crafted from teamwork, endeavour, and hard work.

Vichai rose from relative obscurity, flourishing during the recent years of political upheaval in Thailand, a country where big contracts follow political loyalties.

King Power hit the jackpot in 2006 when it won the duty-free concession at Bangkok's cavernous new Suvarnabhumi airport, and with it a captive market of tens of millions of travellers.

In 2007, a year after ex-premier Thaksin Shinawatra, Manchester City's former owner, was dumped from office in a coup, Vichai saw off legal moves to break his duty-free monopoly.

In a kingdom where connections count, he now firmly belongs to the royalist establishment that turfed out Thaksin. His family received its royal surname in 2013.

Before football, his first sporting love was polo, the sport beloved of the international elite, and both he and Top are accomplished players.

Vichai boasts a lifetime membership at London's Ham Polo Club, frequented by the British royals, and has a stable of horses and players on retainer in Bangkok.